When the Queen's doctors expressed concerns over the Monarch's health, the royals raced to Balmoral to be at her side in the final hours of her life.

Among them was her grandson Prince Harry, who dashed to the Scottish Highlands separately from his royal relatives - taking a flight from London alone and being the first to leave the retreat the next morning. Now new details have emerged on what reportedly happened that day, including the reason why there was confusion over which plane he was taking and his wife Meghan Markle accompanying him. Here we look at the timeline of what is said to have happened on that fateful day that caused Harry to arrive at Balmoral much later than his royal relatives...

On the day of the Queen's death, Harry and Meghan were coincidentally already in the UK as part of a mini European tour.

They had already been to Manchester and Dusseldorf and that evening were due to appear at the WellChild Awards in London.

At 12.35pm that day, a statement was released by Buckingham Palace saying doctors had become concerned for the Queen's health and that she was under medical supervision.

Within 15 minutes, a statement said the now King Charles and Queen Consort Camilla would be travelling to be with the Queen - and Prince William would also be going to Balmoral.

Just after 1.30pm that day, it was announced Prince Andrew, Prince Edward and Sophie Wessex would also be racing to Balmoral.

Minutes later, it was reported Harry and Meghan would be "travelling to Scotland" after changing their plans - although this was later revised to just Harry going to Balmoral.

It was thought that Harry would take the same plane from RAF Northolt as his royal relatives - but he instead travelled on a separate private jet.

It has now been reported by the Sun that Harry missed the RAF flight due to a row over Meghan.

This was because King Charles told Harry it was "not appropriate" to bring Meghan - and a row ensued.

William and the other royals were pictured arriving at Balmoral around 5pm that day.

And by 6.30pm Buckingham Palace formally announced the Queen's death saying she had passed away peacefully that afternoon.

Harry's separate flight arrived in Aberdeen five minutes after the Queen's death was announced to the world. He was eventually driven through the gates of Balmoral 90 minutes later.

And that night he reportedly refused to have dinner with his father, brother and stepmother Camilla at Charles' Birkhall home - instead eating with his uncles and aunt.

The source added: "Charles has an open invitation for Harry to dine with him whenever he is in the country. But Harry was so furious that he refused to eat with his father and brother. It was a massive snub."

The morning after the Queen's death, Harry was the first royal to leave Balmoral catching a British Airways flight from Aberdeen to London Heathrow around 8.30am.

An empathetic member of ground staff could be seen talking to him in the moments before he boarded the plane to leave Scotland.

He was seen putting a kind hand on her back as they chatted in what was clearly an emotional moment between the pair.

I the days after the Queen's death, H arry and Meghan joined William and wife Kate to greet wellwishers and look at floral tributes left for the Queen at Windsor Castle.

The couple is now back in California, where they have been reunited with their children Archie and Lilibet.

But royal author Katie Nicholl says there hasn't been a reconciliation between Harry and older brother William. 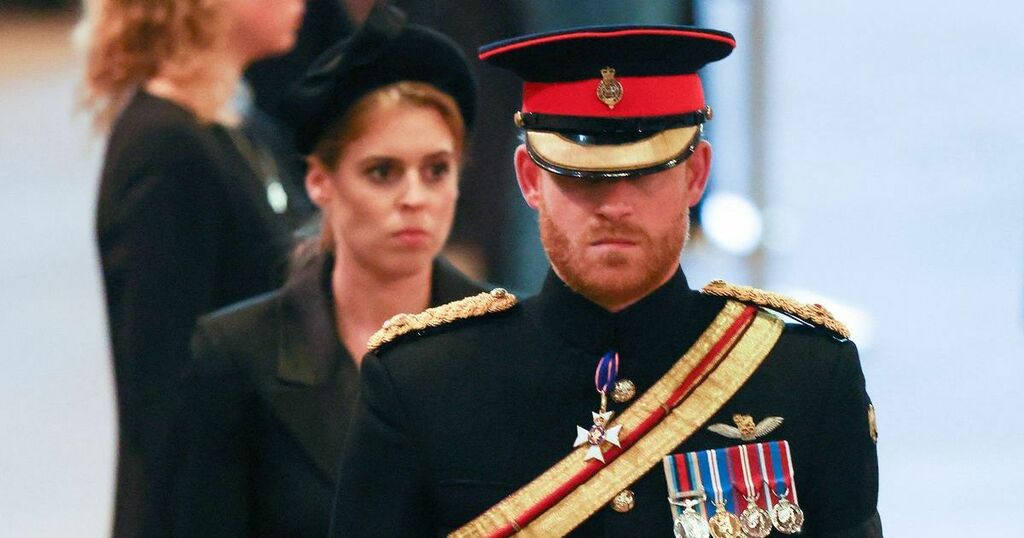 Daily Record
From analysis to the latest developments in health, read the most diverse news in one place.
Meghan Markle 'row' caused Prince Harry to miss flight to Balmoral on day Queen died

On the day the Queen died, both Prince William and Prince Harry raced to Balmoral along with their other royal…

After the news broke that Her Majesty was being closely monitored by doctors at her castle in Aberdeenshire, many royals…

The Duke of Sussex reportedly insisted Meghan join him at Balmoral, before Charles called to say it was "not appropriate"…

Daily Mirror
One place to find news on any topic, from hundreds of sites.
Prince Harry's uniform snub, invitation row and lonely flight to Balmoral before early exit

Harry was not permitted to wear his military uniform alongside other royals attending the funeral. Instead, he wore a morning…