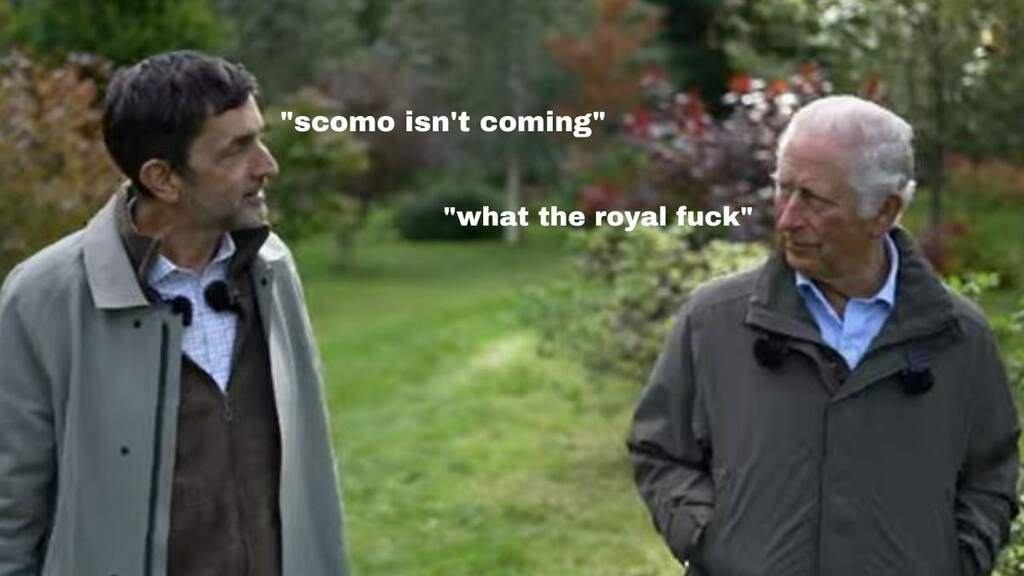 In a brand new BBC interview, Prince Charles took a brief moment to shame Australian Prime Minister Scott Morrison into attending a climate summit, rightly going off about how disastrous things would be if he just ignored it.

The COP26 Climate Summit is slated for next month, however, Morrison is quite unsure if he will attend, due to the two-week quarantine requirement which he reckons will interrupt his “normal duties.”

Normal duties like cooking eggplant curry on a BBQ and referencing The Croods (2013) in political speeches, I guess.

“I will have spent, if I do that, a total of four times 14-day quarantine, basically, in this building, not being able to engage in my normal duties around the country as much as I would like to,” Scott Morrison said in a conference.

“That’s a long time for a prime minister to be in quarantine in a six-month period.”

Over 100 leaders from around the world have confirmed they will be going, including royal family members Queen Elizabeth, Prince Charles and Prince William.

In his BBC video interview, Charles said that if Glasgow fell through, it could basically spell “disaster” for the world, as it faces worsening climate conditions.

“I mean it’ll be catastrophic,” Charles said of potential failure. “It is already beginning to be catastrophic because nothing in nature can survive the stress that is created by these extremes of weather.”

When asked about Morrison’s hesitancy to come, he quite literally stopped in his tracks and looked dead in the reporter’s eyes to say “Is that what he says, is it?”

Charles then had a little crack at Australia and Morrison, telling the BBC how one convinces people who are stuck in their ways to light a fire under their asses when it comes to the issue of climate change.

“Well, you gently try to suggest there may be other ways of doing things. In my case, anyway, otherwise, you lot accuse me of interfering, don’t you?”

You can watch the section about Australia and Morrison right here:

“I’ve always felt that we’re over-exploiting and damaging nature by not understanding how much we depend on everything that nature provides… and also having been somehow trained to believe that nature is a separate thing from us that we can just exploit, control and suppress.”

Charles also revealed that his 51-year-old Aston Martin now runs on excess white wine and whey, but that’s really not the focus here.

The post Prince Charles Might Have Shamed Morrison Into Actually Attending The COP26 Climate Summit appeared first on Pedestrian TV.