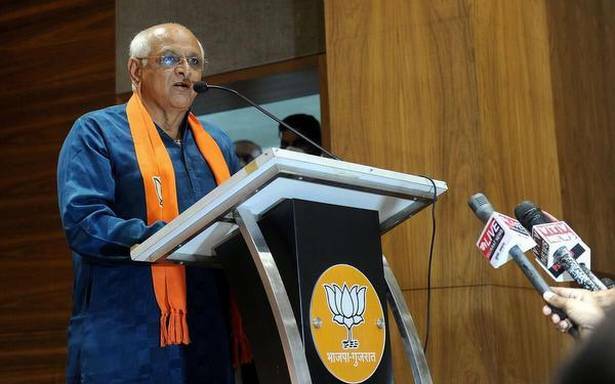 In a surprise choice, first-time legislator Bhupendra Patel, 59, a protege of former Chief Minister and current Uttar Pradesh Governor Anandiben Patel, was on September 12 elected to be the new Chief Minister of Gujarat.

At the BJP Legislature Party meeting, conducted by central observers Narendra Singh Tomar and Prahlad Joshi in the presence of the MLAs and other senior leaders, unanimously endorsed Mr. Patel’s name after it was proposed by the outgoing CM Vijay Rupani. Mr. Rupani, a protege of Union Home Minister Amit Shah, abruptly resigned on September 11 paving the way for a change of guard.

Mr. Patel’s name was cleared by the Prime Minister Narendra Modi to replace Mr. Rupani from the numerically insignificant Jain community, with a leader from the dominant Patidar caste ahead of the Assembly polls likely in November 2022.

After his election, Mr. Patel expressed his gratitude to Mr. Modi, Home Minister Amit Shah and the party leadership for reposing faith in him.

The State BJP chief and MP C.R. Paatil said, “Bhupendrabhai is a dynamic leader and the party under his leadership will sweep the next Assembly polls.”

Mr. Patel will be sworn in on September 13 in the presence of top leaders including Mr. Modi, who will attend the event virtually.

In the 2017 Assembly polls, Mr. Patel had succeeded Ms. Anandiben Patel as legislator from Ghatlodia Assembly segment in Ahmedabad.

Mr. Patel has studied engineering and is a builder. He is active in the Patidar community’s social service outfits in Ahmedabad and is the first leader from Ahmedabad city to be elected Chief Minister.

“The name was a complete surprise even to MLAs. It came from Delhi and possibly Anandiben had a critical role in his selection,” a senior party leader told The Hindu.

He added that with Mr. Patel’s choice, the BJP has given a clear message to the Patidars, who form the backbone of the party’s support base in the State. In 2016, when Ms. Anandiben Patel had suddenly resigned as Chief Minister, Mr. Shah, then BJP president, was authorised choose her successor. He had picked Mr. Rupani, who was also a first-time legislator then.

“The message is loud and clear: it’s Anandiben who has prevailed and got a person of her choice at the helm as Rupani did not inspire confidence in the party leadership to face the polls with him on the wheels,” a senior party leader and former Minister said, adding that the Patidars have been placated by the party now. The party’s first Chief Minister in 1995 was Keshubhai Patel, a Patidar leader from Saurashtra region.

The BJP is also expected to make drastic changes in the new Cabinet and field fresh faces.