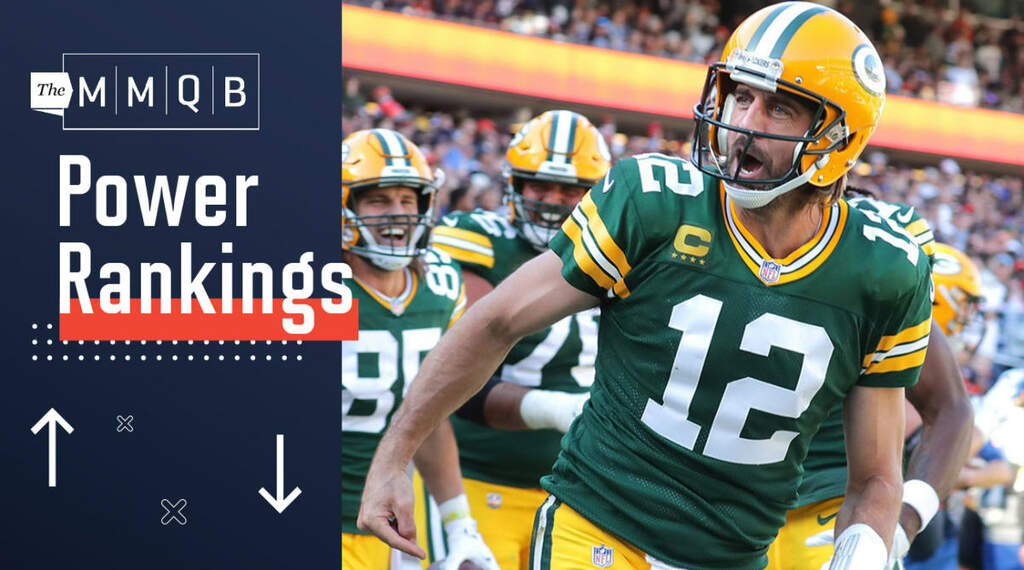 The regular season is in the books, and we’ll be on to playoff predictions very soon. But before we move ahead with the final 13 games, let’s take one last look back at each team’s season in this week’s MMQB Power Rankings Poll.

Here’s how the teams stack up one through 32, one last time. (Who are we kidding; we’ll almost certainly do this again after the Super Bowl and the draft.)

You’ll note one of the teams that earned a first-round bye is sitting atop the poll, while the other is notably further down the list. The Steelers are our lowest-ranked playoff team and they are behind one AFC team on the outside looking in. Plus, see if you guess which New York team comes in dead last.

The road to the Super Bowl once again goes through Lambeau Field, as the Packers rolled to the NFC’s top seed and a coveted first-round bye.

The two-time defending AFC champs have yet to play a road playoff game in Patrick Mahomes’s career, but they’d have to visit Nashville if we get a rematch of the 2019 AFC championship game.

The Bills looked vulnerable at times this season, but they fended off the Patriots to win a second straight AFC East crown and now get the right to host the rubber match this weekend.

The defending champs are banged up, but still dangerous as they head into the playoffs. Would anyone be surprised if Tom Brady won a ridiculous eighth Super Bowl ring?

The Rams are back in the playoffs for the fourth time in five years, and now we get to see if Matthew Stafford was worth the investment.

Remember the days when Dak Prescott had to carry around a leaky defense? Now the Cowboys’ D could be what carries the team through a playoff run.

The Titans are the AFC’s top seed, but our voters (at least one of them in particular) aren’t fully convinced. All eyes are on Derrick Henry, and the possibility he could be back after the bye week.

The Bengals are still looking for their first postseason win since 1990. Joe Burrow is clearly the QB to do it, it’s just a matter of when. They’ll be favored to get that monkey off their backs on Saturday.

The Niners didn’t lock up their playoff spot until the final day of the season, but our voters see them as a top-10 team no one should be sleeping on.

After a one-year absence, the Patriots are back in the playoffs with a rookie quarterback under center. But we know they have experience elsewhere on the roster and a coaching staff that’s been here a time or two.

The Raiders survived one of the more emotionally exhausting games of the year just to get in the playoffs, now they have a quick turnaround against a Bengals team that rested key players in Week 18.

The Cardinals were the NFL’s last undefeated team back in October, but they haven’t looked like that team for some time now. Still, anything can happen in the tournament, even for teams that limp in.

Nick Sirianni is the only rookie head coach who took his team to the playoffs this season. The reward is a trip to Tampa to face the defending champs. But whatever happens, this season has been a success.

The Chargers found a way to come up short, even if they didn’t look like the same old Chargers doing it. But the loss (and near tie!) against the Raiders will make for a longer offseason, in more ways than one.

The big beneficiaries of the Jaguars’ upset over the Colts will stroll into the playoffs one last time (we think) with Ben Roethlisberger at the helm. Then we’ll settle in for an interesting offseason.

Just a few weeks ago, the Colts were looked at by many as a top-five team. They are still the top non-playoff team in our poll, after an all-time choke job the last two weeks.

The Ravens are undeniably talented, but suffered too many injuries and lost too many close games. There’s plenty of reason to assume they’ll be right back in the mix next year.

The Dolphins’ wild run of seven straight wins came to an abrupt end, and then Brian Flores found out that turning the season around in dramatic fashion wasn’t enough to save his job. The Dolphins now appear to be rebooting (again).

The Saints deserve credit for fighting to win nine games in an injury-plagued season that saw them start four different quarterbacks. They are one of several teams that will highlight an interesting offseason of potential QB movement.

Few teams had as disappointing a season as the Browns, given how this team felt about itself 12 months ago. The team is now saying it wants Baker Mayfield back in 2022, but no one should be surprised if they try to make a splash.

The Broncos just haven’t been able to find a solution at quarterback since Peyton Manning retired. They’ll keep looking, and they have the rest of the roster to make a quick leap if they find one.

Was this year the end of an era in Seattle, or just a blip in Pete Carroll and Russell Wilson’s run there? It’s one of the biggest questions of the offseason.

This was a fitting final year of the Mike Zimmer era, as the Vikings were close but just not quite good enough. There’s plenty of talent on the roster, but we’ll see what kind of changes are made with a new GM and coach in place.

Arthur Smith’s squad hung around the fringes of the NFC’s playoff picture for much of the season, but was never really a serious contender. Their minus-146 point differential was second-worst in the conference.

Washington won the worst division in NFL history last season, so this is where a step back takes you. Having your starting quarterback go down in Week 1 is one way to derail a season, but that can’t be the only excuse here.

The Bears tried to thread the needle this season, competing and bringing along a rookie quarterback. Justin Fields will have someone new in his ear next year, tasked with developing him into the star Chicago is expecting.

Matt Rhule will enter the third season of his seven-year deal on the hot seat. Perhaps this was a bigger project than we realized at the time, but the results will have to show on the field at some point soon.

It’s cliché at this point to talk about how much credit Dan Campbell deserves for keeping his team invested through the early losses, and to admire the late-season wins. But everyone’s saying it because it’s true! We all saw it.

The Jets still have a lot of work to do after Year 1 with Robert Saleh and Zach Wilson. We’ll see how much patience the fan base will have if things don’t pick up next season.

The Texans were expected to be the worst team in the NFL, but they fought hard for David Culley and competed (in a bunch of games, at least) with Davis Mills.

The Urban Meyer era ended in complete disaster, but Sunday’s clown out win against the Colts was an unforgettable way to end the season. The Jags are once again on the clock to get another building block, likely on the opposite side of the ball from Trevor Lawrence.

It’s not just the losing, but the way they did it that helped sink the Giants to the very bottom of the rankings. But a pair of top-seven picks is a nice consolation prize after a season that went off the rails.