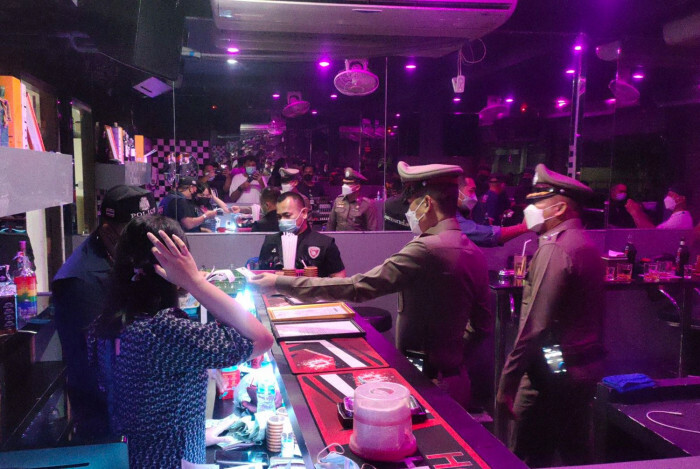 Twelve eateries in Pattaya were found violating Covid-19 restrictions during police raids late on Wednesday night, with many customers, both Thais and foreigners, caught drinking alcohol.

In Khon Kaen, 34 people - including the owner, staff and customers - were caught during a police raid on a restaurant that found alcohol was being consumed.

A combined team of Pattaya police and investigators from the provincial Chon Buri police office inspected service venues and eateries in Pattaya on Wednesday night.

Of the eateries found in violation, Hot Shots in Soi Pattaya 6 had closed its front door, but was still serving customers inside. Police ordered staff to let them in and found many customers, both Thais and foreigners, were still drinking inside. All were detained, but police did not provide the number.

At 9 Klom, staff had pulled down a tarpaulin covering the front of the shop and let customers drink alcohol inside. Alcoholic drinks were poured into plastic jugs to deceive police, the arresting team said.

A total of 12 shops in Pattaya were found to have breached Covid-19 restrictions. Owners, staff and customers were handed over to the Pattaya police station for legal action.

In the northeastern province of Khon Kaen, police arrested 34 people - including two managers and eight  staff - at a restaurant in Muang district for breaching Covid-19 restrictions during a raid in the early hours of Thursday.

Pattaraphon Chaimongkhollarp, 42 and Kitphat Duangsanan, 42, admitted they were in charge of Por Meena restaurant on Srichan Road. The restaurant was still serving alcohol to customers when police raided the premises around 1am. A total of 24 customers were found drinking inside.

During the raid on Por Meena restaurant, alcoholic drinks were served in plastic containers, said the police chief. The restaurant also served alcohol to customers aged below 20, he added.

The two managers, eight employees and 24 customers were handed over to officers at Muang police station for legal action.