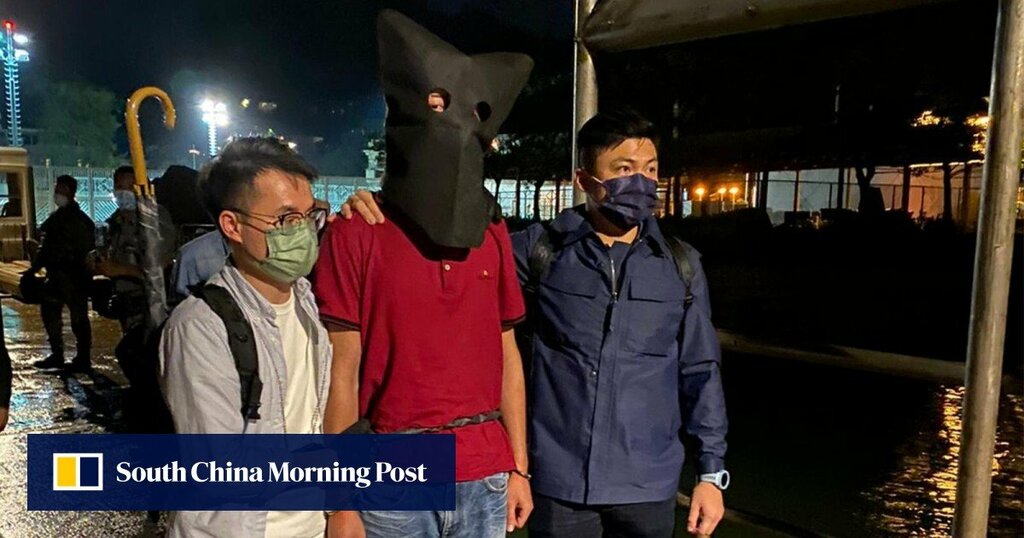 Police arrested a man on Wednesday night who they suspected fatally slashed the throat of a Hong Kong taxi driver following a citywide manhunt.

Officers apprehended the suspect, 31, not far from Yung Shue Wan Ferry Pier on Lamma Island, Chief Inspector Terrence Tse Tsz-kwan of the Hong Kong Island regional crime unit told an early morning press conference on Thursday. A search of the area uncovered a stab-proof vest and a foldable knife with a 9cm blade inside a rubbish bag, he said.

The suspect, identified only by his surname Choi, was taken by boat to marine police headquarters at Sai Wan Ho and was being detained for questioning at Wan Chai Police Station. No charges have been laid.

Choi is wanted over the killing of the 48-year-old taxi driver at the junction of Eastern Street and Queen’s Road West in Sai Wan just before 5am on Tuesday. According to Tse, the suspect left a hotel near the crime scene, hailed the cab and got inside but was seen exiting about a minute later as the victim stumbled out of the vehicle and collapsed on the ground.

He had suffered a 7cm-long, 2cm-deep cut along the right side of his neck, near the main artery, but not severing it. The driver was certified dead roughly an hour after he was rushed to Queen Mary Hospital.

Initial investigation found that the suspect fled to an alley off Eastern Street, where he dumped some bloodstained outerwear, surgical masks and towels at a public toilet.

Officers also discovered a bag full of surgical masks with bloodstains and a 16cm-long meat cleaver on the rooftop of a nearby building. The victim’s possessions were found on his person or inside the taxi, suggesting the attack was not a robbery.

Tse said the suspect took a ferry to Lamma that day and changed out of his clothes. The force on Tuesday and Wednesday released two photos of Choi, urging the public to report his whereabouts but warned he was “extremely dangerous and could have violent tendencies”.

Acting on intelligence, police arrived on Lamma, a tranquil community home to a small community of villagers and expats drawn by the dense jungle and beaches, and began zeroing in on his location on Wednesday. A local resident reported to police the suspect was seen outside a tuck shop near the pier and officers swarmed the area, seizing Choi at 8.36pm.

Tse said the force would investigate where the suspect was hiding before he was apprehended and whether any associates helped him evade capture. No record of Choi suffering from mental illness had been found and officers were still trying to determine a motive for the attack.

“We will not rule out other possibilities, including whether or not the arrested man had been instigated by someone. Were there any confederates? Or does he have mental health issues?” Tse said.

Anyone who witnessed the killing or was in the immediate vicinity while it happened should contact police, he added.