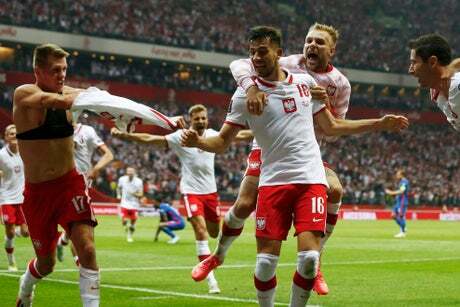 The Three Lions captain beat Poland goalkeeper Wojciech Szczesny from almost 35 yards with a fine spinning effort with 18 minutes to go in a hard-fought and feisty clash at the Stadion Narodowy on Wednesday night.

Kane’s 41st England goal - he has now scored in 15 consecutive qualifiers and moved ahead of Michael Owen in fifth place on the list of his country’s all-time top scorers - looked to make it six wins from six on the road to Qatar for the beaten Euro 2020 finalists and all but guarantee their spot at the next major tournament next winter.

England remain four points clear at the summit of Group I and firmly on course to reach the finals next year with only home matches against Albania and Hungary plus trips to minnows Andorra and San Marino to come with their two toughest away trips now in the rearview mirror, but questions may be asked of why Southgate curiously opted not to make any substitutions at all on the night.

He is the first England manager since Terry Venables in the Euro 96 semi-final not to make a single change in a match, despite Poland counterpart Paulo Sousa introducing five players in the second half and the hosts applying pressure late on.

Before the game, jeers for the visitors’ national anthem was drowned out by rapturous applause, but there were then loud boos and whistles when England’s players took the knee ahead of kick-off.

Southgate reverted back to the same XI that started last week’s thumping win over Hungary that was marred by racist abuse aimed at Raheem Sterling and Jude Bellingham by a section of the home crowd in Budapest, after having the luxury of being able to change his entire team for the 4-0 rout of Andorra at Wembley on Sunday.

The first half was a competitive and feisty affair, with duelling world-class marksmen Kane and Lewandowski both missing decent chances.

Kane’s header back across goal was cleared after he was perfectly set up by Sterling, while Lewandowski could not quite get enough purchase on the ball to lob Jordan Pickford after a fine lofted pass into the box from the tricky Karol Linetty.

Poland were intense and aggressive from the outset, with tensions boiling over after the half-time whistle as Harry Maguire and Kamil Glik clashed and caused a commotion involving nearly every player on the pitch, with both defenders booked after a long warning from German referee Daniel Siebert.

Just as they did in Budapest last Thursday, England stepped up the tempo immediately after the interval, with Sterling and Jack Grealish causing plenty of problems - the latter with a teasing cross that flashed menacingly across the six-yard box - and Kalvin Phillips testing the reflexes of ex-Arsenal goalkeeper Szczesny from distance.

Maguire’s header from a Luke Shaw free-kick smashed against the foot of the post and Sterling tried to turn home the rebound, but the offside flag was up against the Manchester City winger.

England were dominating proceedings as the impatient home fans whistled their every touch, with Poland briefly threatening when Puchacz weaved into the box too easily but was forced wide and fired into the side netting.

Kane finally found the breakthrough with an excellent effort from distance, cutting across the ball and punishing Szcesny for a late dive.

England looked to be defending well in the face of sustained pressure late on despite a Pickford blunder almost leading to an equaliser, but they cracked with only two minutes of stoppage time left as Lewandowski teed up AEK Athens’ Szymanski for his first senior international goal to spark jubilant scenes in the Polish capital.