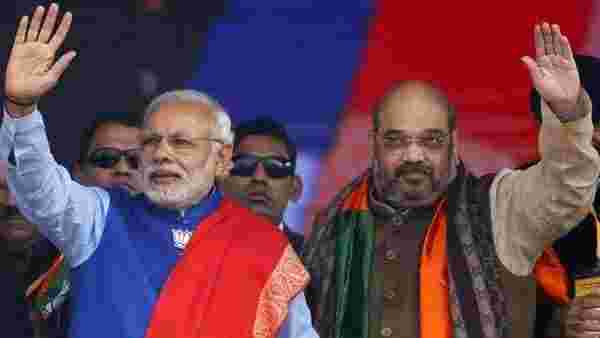 Union Home Minister Amit Shah praised Prime Minister Narendra Modi as a “democratic leader" on Sunday. During an interview, Shah said even his critics will agree that the Union Cabinet has never functioned in such a democratic manner as it is functioning in the Modi government.

In an interview to SANSAD TV, Amit Shah said Modi does not hesitate in taking political risks for decisions that are in national interest, and at times has taken bitter decisions for the welfare of the nation.

On a question that opposition and critics term Modi an autocratic leader who takes all decisions on his own, Shah described the prime minister as a “democratic leader". Opposition has called out Modi over the year, dubbing his decisions related to demonetisation, nationwide lockdown during the first phase of Covid-19, farmers' protest, abrogation of Section 370 in Jammu and Kashmir as dictatorial.

Shah said that he has not seen a "patient listener" like the prime minister, who gives importance to all worthy suggestions given by anyone irrespective of their designation or position in the hierarchy.

“...I have closely seen both Modi and his style of working. I have never seen a patient listener like him. Whatever may be the issue, he patiently listens to everyone and speaks least, and then takes a proper decision. He takes decisions patiently after considering suggestions given by all including a… small-time official or worker," the Home Minister said.

Emphasising that Modi does not impose his decisions, Shah said, “Those who have worked with him or at times there are critics also among those who worked with you, they all would agree that the Union Cabinet never functioned in such a democratic way as it is being run in a democratic manner with Modi ji being the Prime Minister."

Shah said that Modi insists on discipline and therefore, details of some meetings, which are required to be confidential as they are premature, are not made public.

The home minister stressed that decisions in every meeting are taken after collective consultation.

Shah stated that Modi has always maintained that he is in power to change the country for the better and not merely to run the government. Therefore, he does not hesitate in taking harsh and risky decisions which may be against the party's supporters but are in the interest of the nation and the people, he added.

Noting that one has to take harsh and tough decisions in national interest, Shah said, “When you crack down on black money, bring economic reforms, seal all loopholes of tax evasion, then some people suffer, those who voted for us for years may also suffer."

“It happens, but they also understand that Modi is not going to get anything out of this, eventually it will benefit the country. So, finally every one associates with Modiji," he said.

Shah listed out various achievements of Modi during his 20-year-long public life, especially of his leadership both as Gujarat Chief Minister and as Prime Minister at various critical junctures.

Taking on the opposition, Shah said that some opposition parties assume it is the birth right of their leadership to be in power. But Modi changed this by focusing on people-centric and nation first politics, he said.

Shah said he would request friends from these opposition parties, who criticise the government's policies, that if there is corruption in the present government expose it.

"Expose our failures to the people. But don't lower the political standard by resorting to personal attacks," Shah said.