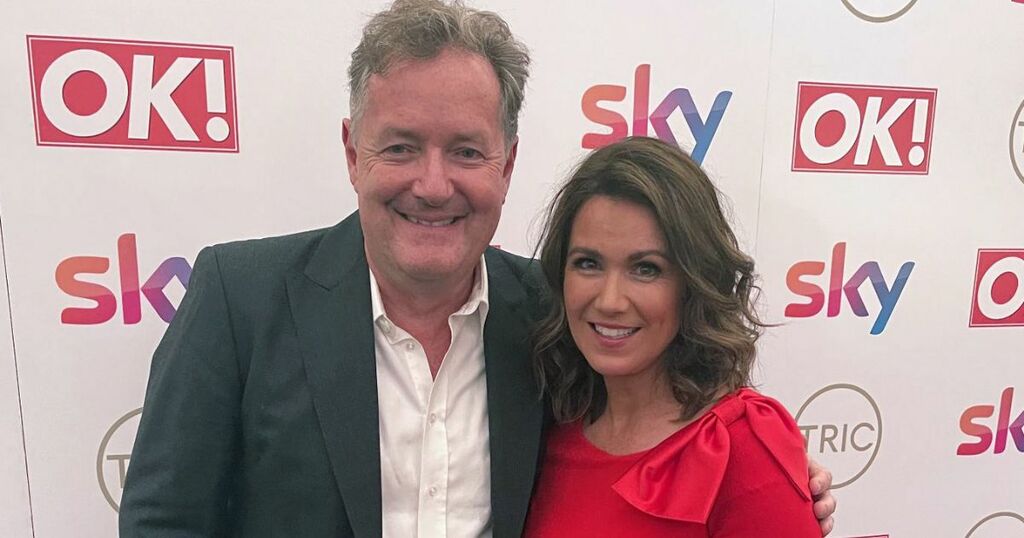 The one-time presenting duo looked delighted to bump into each other at an awards ceremony on Wednesday afternoon.

Piers, who sat next to Susanna on the ITV breakfast show sofa prior to his shock exit, took to social media to express his joy at catching up with his former colleague.

The 56-year-old shared a sweet snap of himself and the mum-of-three smiling for the cameras at the TRIC Awards 2021 with his 8 million followers on Twitter.

In the image, Piers can be seen wearing a suit, without a tie, while Susanna looks stunning in a figure-hugging red dress.

Many fans of Good Morning Britain were delighted to see the double act back together - with some even calling for an on-screen reunion.

"How lovely if only you were both sat behind a very big desk again I could start enjoying my mornings again !!!" one fan replied to the pictures, tagging Good Morning Britain in their tweet.

"Now just reunite on GMB…." another social media user requested, while a third added: "GMB needs you back together it's not the same without you!"

However, it seems that their reunion may be a one-off.

The 50-year-old presenter tweeted a selfie of herself and her former co-host - with a very different caption.

"Back together - one day only #TRICAwards" the broadcaster sternly wrote to her 830,400 followers.

Piers and Susanna were a popular and compatible presenting duo prior to the dad-of-four's sudden exit from the air earlier this year.

In March, Piers stormed off the set of the show after being condemned by his co-presenter Alex Beresford for his comments about Meghan Markle 's mental health.

The 56-year-old had repeatedly made shocking claims surrounding the Duchess of Sussex and her experience with suicidal thoughts.

After being being criticised by his co-star, Piers sensationally walked off the show and later quit. the ITV breakfast programme.

Earlier this summer, the controversial presenter admitted that he regrets storming off during the debate.

“Walking off the show was not very on-brand, I admit. I wish I hadn’t done it,” he told the Daily Mail in May.

“And even as I was walking off, I thought, why are you doing this irrational thing? I shouldn’t have done it but I was annoyed and worried that in my state, I might’ve said something I regretted. I needed a little time out.”

At the start of September, Piers was cleared by Ofcom, after the media watchdog received more than 57,121 complaints regarding his comments about the former Suits actress.

In a 97-page ruling, the regulator admitted that while the TV star's remarks were "potentially harmful and offensive", they were permitted.

A jubilant Piers declared the verdict a "resounding victory" and a blow to "cancel culture'.