PICTURES showing the Prime Minister drinking at a party during lockdown and raising a toast have been published.

The images, obtained by ITV News, have been released online and show Boris Johnson holding a glass in the air at one point in a room full of other people during what is believed to be a leaving party on November 13, 2020.

EXCL: @ITVNews has obtained pictures of Boris Johnson drinking at a No10 party during lockdown in November 2020. The photos cast fresh doubt on the PM's repeated claims he was unaware of rule-breaking in No10 during the pandemic. See all images here:https://t.co/sUJiWpxqmm pic.twitter.com/iXopuPIQu7

They also show bottles of red, white and sparkling wine on a table alongside a bottle of hand sanitiser and one of the traditional red ministerial briefcases.

One shows the Prime Minister with his arm aloft, apparently making a toast.

The other participants have been blurred out of the pictures by ITV.

Also on the table before Johnson and the other participants are empty glasses of wine, a takeaway food box, what appears to be a bottle of spirits, biscuits and crisps.

The event is reported as being held in honour of the departing communications director Lee Cain, and the pictures show eight people standing close together, not including the photographer.

Ian Blackford, the SNP's Westminster leader, said: "These pictures clearly show, as the police investigation concluded, that parties did indeed take place at Downing Street during lockdown, and that the Prime Minister was there. It is sickening.

"Boris Johnson told us firstly that no parties took place during lockdown, then he said he wasn't at them and that he was angry about them. He is a serial liar and cannot be allowed to get away with it.

"It is truly a disgrace that Tory MPs are keeping him in Downing Street – he demeans the office that he holds. It is time for them to do the decent thing, for once, and get rid of him. This charlatan should be an ex-Prime Minister by now."

“Can the prime minister tell the House whether there was a party in Downing Street on 13 November?” asks Labour’s Catherine West

“No, but I’m sure whatever happened the guidance... and the rules were followed at all times,” says the PM ⁰#PMQs https://t.co/sPXyCwRMtj pic.twitter.com/GDuUAPIRHH

The Prime Minister has previously denied there was a party in Downing Street on the date the pictures were taken.

Asked by Labour's Catherine West whether there was a party in his home on November 13, the Prime Minister responded: "No, but I'm sure that whatever happened, the guidance was followed and the rules were followed at all times."

It comes amid reports the upcoming Sue Gray report - due to be published imminently - will contain photographs exposing rule-breaking in the corridors of power during lockdown.

A No. 10 spokesperson said "The Cabinet Office and the Met Police have had access to all information relevant to their investigations, including photographs.

"The Met have concluded their investigation and Sue Gray will publish her report in the coming days, at which point the Prime Minister will address Parliament in full.”

The Metopolitan Police confirmed last week they had wrapped their investigation into Downing Street lawbreaking during the pandemic.

The event pictured is not one the Prime Minister was fined for though the Daily Mirror reports the party was instigated by Johnson, who poured out booze for others.

England had been plunged back into strict lockdown following a rise in Covid-19 cases just eight days before the photographs were taken.

He is also going to be the subject of a Privileges Committee investigation into whether he lied to Parliament about knowingly breaking the rules.

Photo evidence is thought to make it harder for the Prime Minister to argue he was not aware he was acting illegally. 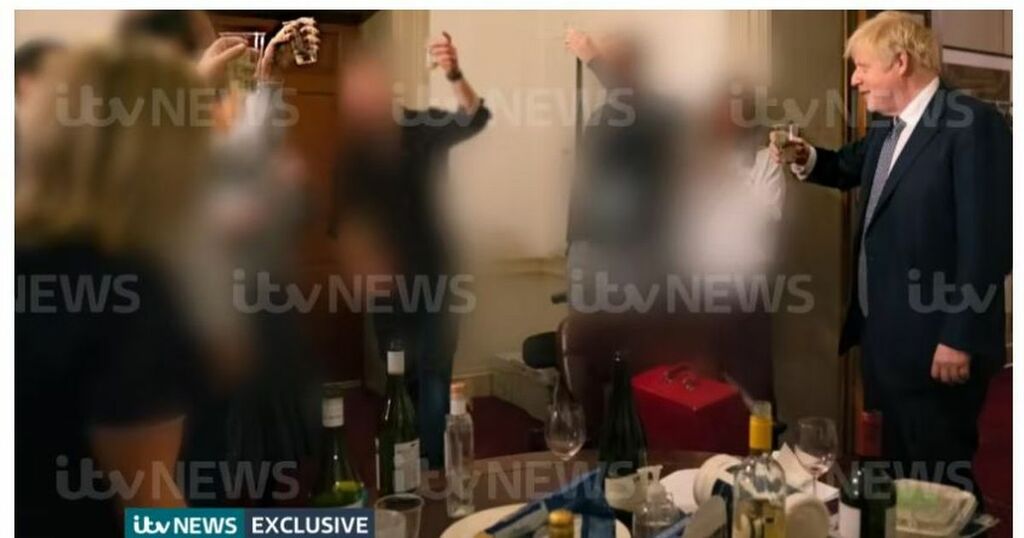 Ahead of the publication of the Sue Gray report, pictures of the Prime Minister allegedly breaking lockdown rules at a…