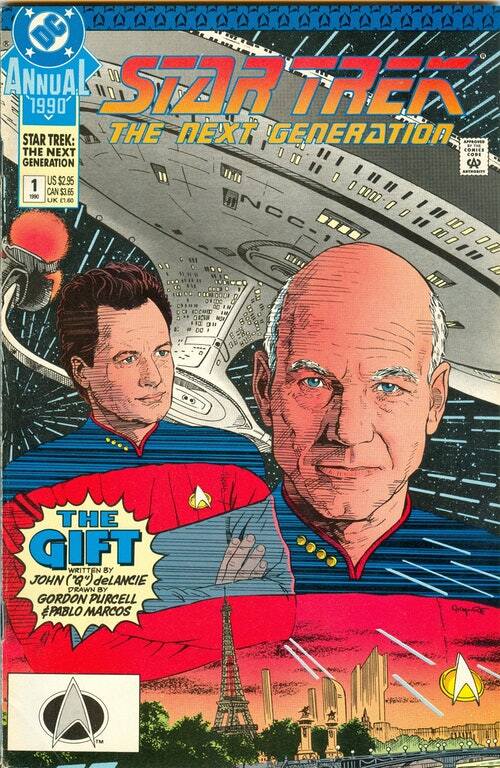 In the Season 2 trailer for Star Trek: Picard, the titular hero is suddenly on a mission to restore a radically changed timeline. For hardcore Trek fans, the idea Jean-Luc has to fix the future by saving the past isn’t exactly new, but one new twist in Picard Season 2 is simple: For the first time, it appears the vast majority of a new Star Trek season will take place in the present.

But there’s another wrinkle buried in the trailer: namely, the idea Picard’s family history is somehow connected to changes Q caused in the timeline. That detail, combined with the presence of Q, is strangely reminiscent of a long-forgotten Star Trek comic book story from 1990.

The newest trailer for Picard Season 2 firmly establishes that the crew of the La Sirena will find themselves in an altered “present,” one in which the United Federation of Planets doesn’t exist, and everyone seems to wear all-black all the time.

Rios (Santiago Cabrera) also has some fingerless gloves, so you know things have gone topsy-turvy. “Q went back in time and turned our world into a totalitarian nightmare,” says Picard.

For unclear reasons, this sends the crew back in time to the 21st century, to somehow undo whatever it is that Q (John de Lancie) has done.

However, the trailer hints that there’s another twist lurking inside the idea of Q simply changing time. The trailer opens with a voiceover from Laris (Orla Brady), Picard’s Romulan bodyguard, who says, “I always thought of you as a man who chose the stars. But after all this time, I’ve come to wonder, have you been seeking or running?”

As she says this, we quickly see a broken piece of glass from Chateau Picard, which appears to be a flashback to a young child in the same room. Later in the trailer, we also see what appears to be a kid in the same all-glass gazebo, with a woman who might be the kid's mom (or a teacher or a nanny). Whatever is going on in this scene, and in this gazebo, clearly matters.

The larger point is clear: There’s not just a single time travel twist in Picard Season 2. Instead, fans can expect at least two. The first is the obvious, overarching, and currently unclear reason the crew goes to the 21st century. But the second twist heavily implies that something happens in the past, with someone in Picard’s family (maybe Jean-Luc himself) that establishes an important turning point in history.

Well, all three of those elements were also present in the 1990 DC comics Star Trek story “The Gift.” This story — written by John de Lancie himself (Q!) — posits that Picard had a secret brother named Claude, who died when Jean-Luc and Claude were kids.

In the comic, Q taunts Jean-Luc with the knowledge he was the reason this brother died. And so, in a classic be-careful-what-you-wish-for moment, Q changes the past and allows Claude to live.

Preventing this death creates a twist in which an adult Claude Picard becomes a popular demagogue, transforming the Federation into a totalitarian nightmare. Jean-Luc is then faced with a choice: kill Claude with a phaser in a graveyard to prevent the terrible future from unfolding. This story is absurdly dark and basically claims that Jean-Luc’s secret brother was Space Hitler, and that it’s good he died when he was a kid.

Now, it doesn’t seem likely that Picard Season 2 would reboot Claude. The events of “The Gift” were quickly rendered non-canon by the 1990 TNG episode “Family,” in which we met Picard’s actual brother, Robert Picard (Jeremy Kemp), and their family had a wine vineyard. And yet. There are so many overlapping plot elements between this random comic book story and the new Picard trailer.

The truth is, we don’t know a whole lot about Picard’s childhood. We also don’t know a ton about his family history. In Generations, Picard mentions “the Picard that fought at Trafalgar,” as well as other members in his “family line.” Could there have been a Picard family member who was a terrible, evil politician?

If that’s the case, perhaps the premise of Picard Season 2 isn’t about Jean-Luc having to get rid of a secret evil brother, but instead about him going back in time to prevent his own deranged great-great-great-grandparent from starting up an evil Empire.

If this theory is right, by the way, everyone better get ready to talk about “grandfather paradoxes” for at least ten episodes.