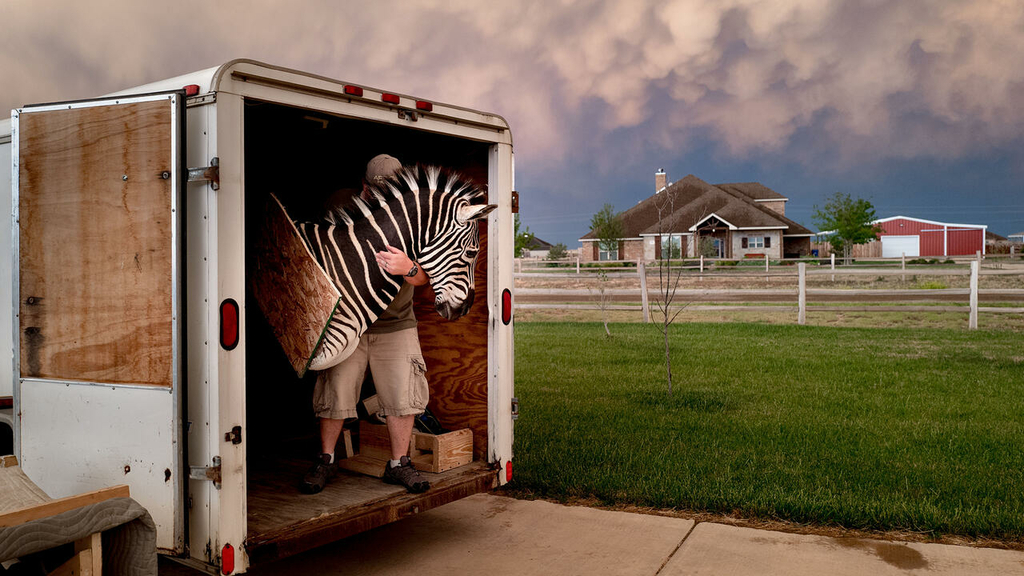 It's a story of love, death, possession and consumerism. Photographer Mélanie Wenger explores the complexity of hunting exotic animals in the United States in her exhibition "Sugar Moon", at the Visa Pour l'Image photojournalism festival in Perpignan, France.

Wenger had already spent years documenting trophy hunting and its role in wildlife conservation in Africa.

At a 2018 convention organised by a pro-hunting lobby in Texas, she met Erik Grimland, a professional hunter and a taxidermist who has been been at it since he was a child.

He owns a ranch in Turkey, northern Texas, where he breeds "exotic" animals, mostly from Africa and Asia.

"The first exotic animals like oryxes and axis deers were imported in the late 1960s to one or two ranches in the south of Texas," Wenger told RFI.

"They were very big ranches and they decided to breed them because they and were in danger of extinction in their original environment.

Texas’s exotic game animals aren’t domesticated and live in semi captivity. They are classified as cattle, and under Texas law can be hunted legally.

Grimland raises exotic game animals and sells them for hunting to customers who can shoot them without traveling abroad.

"The exotic animals game hunting has become a very big industry in the US. It’s bringing one billion dollars a year. It’s a whole economy," explains Wenger.

"Hunting culture is extremely developed in the US as well as the pro-gun culture in the south of the US ... Most of the time the hunters go to Walmart before they go the ranch and there purchase a hunting licence.

"They bring their own rifle or rent it. So it’s pretty accessible to anybody."

When the hunters such as Grimland can afford it, they go to Africa, in Namibia or South Africa to hunt antelopes, zebras, lions, giraffes, and bring back their hunting trophy.

The budget for Grimland’s first African safari, including the taxidermy, was approximately $30,000.

"You can see that there is a pro and an anti-hunting side… it has become a sort of communication war, both sides not really hearing the other one."

The hunters argue that legally killing animals could contribute to the conservation of both species and land. That argument is questioned by animal rights groups and certain ecologists.

As well as being the title of Wenger's photo report, Sugar Moon is a song by Bob Wills, a country music songwriter who was born in Turkey, Texas in the same village as Grimland.

"The song speaks about love and death and also brings up this specific atmosphere of North Texas," Wenger says.

"It’s very flat, very burnt and yellow and there’s a lot of wind."

► Visa Pour l'Image from 28 August to 26 September 2021 is being held in Perpignan, southern France.