Pfizer COVID vaccine available for over 60s in WA from next week, Mark McGowan announces 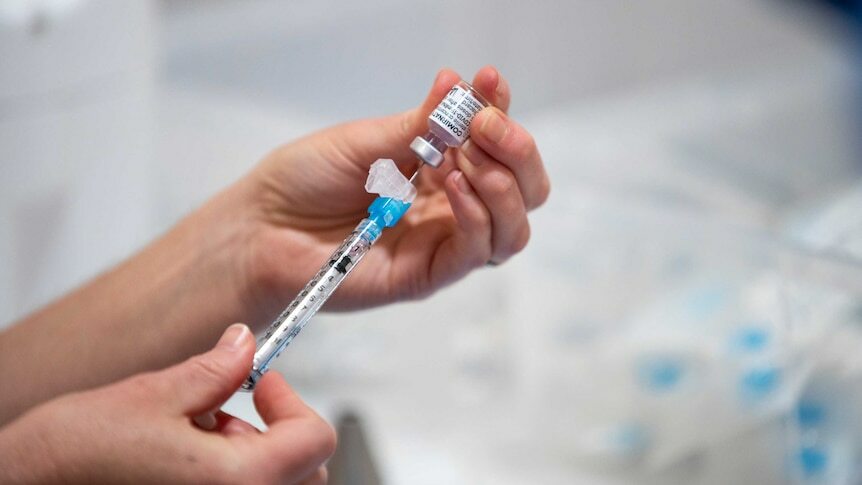 West Australians aged 60 and over will be eligible to receive the Pfizer COVID-19 vaccine from Monday next week, Premier Mark McGowan has announced.

The latest rollout in WA's vaccination strategy will apply to people who are not yet immunised.

"We want to get these numbers up and ensure they get vaccinated as a priority … because they are more vulnerable to death or illness from COVID-19."

The announcement means that from next week, all West Australians aged 12 and over will be eligible for the Pfizer vaccine.

Yesterday vaccinations opened to those aged 12-15, with a total of 314 people in that group vaccinated on the day.

More than 1.2 million people in WA have received at least one coronavirus vaccine dose.

The Pfizer shot will only be available to over 60s at state-run clinics.

"We already have high vaccination rates amongst that community, but you would be aware of a certain amount of hesitancy particularly the 60-69 year-olds not wanting to take AstraZeneca.

"Obviously, we know it is safe, but if this extra announcement today gives them extra opportunity and motivation to get vaccinated. That is a good thing."

Mr Cook said he expected there to be a reduction in the use of AstraZeneca.

"What happens to those supplies ultimately is really a matter for the Commonwealth," he said.

'We want to protect ourselves'

Louis Wong, 68, had been reluctant to get the AstraZeneca vaccine and said he was disappointed he did not have an option he was comfortable with until now.

"It is a good choice for the citizens. We want to protect ourselves.

"I have got a few friends that are not so confident to take the AZ so they are waiting for the Pfizer."

Council on the Ageing (COTA) WA chief executive officer Christine Allen said there had been a lot of vaccine hesitancy, particularly in culturally and linguistically diverse communities.

"We know that seniors have wanted to have the option of which vaccination they had," she said.

"This is great news and hopefully it will encourage those who have been hesitant to go ahead and get the vaccine."

Mr McGowan also gave more detail about how he imagined vaccine passports would be used in WA towards the end of this year.

"What we are looking at is certain rules about where you can go if you are vaccinated, and non-vaccinated people wouldn't be able to do the same things," he said.

"It may well be flying on an aircraft interstate, flying overseas, going to the football, going to a concert, those sorts of things."

He did not rule out enforcing vaccine passports to go to hospitality venues.

Mr McGowan said he did not think the passport system would require legislation.

"As to how long it lasts, that's a decision for the future. [But] I don't think it requires legislation.

"I think it can be a public health order issued by the Chief Health Officer. We will watch what happens in NSW and Victoria on this and look to put in place similar arrangements."

Shadow Health Minister Libby Mettam indicated she would support vaccine passports but said there should be an end date.

"Vaccination passports as a temporary measure for some venues is potentially an important tool to ensure that we can see restrictions in response to COVID behind us," she said.