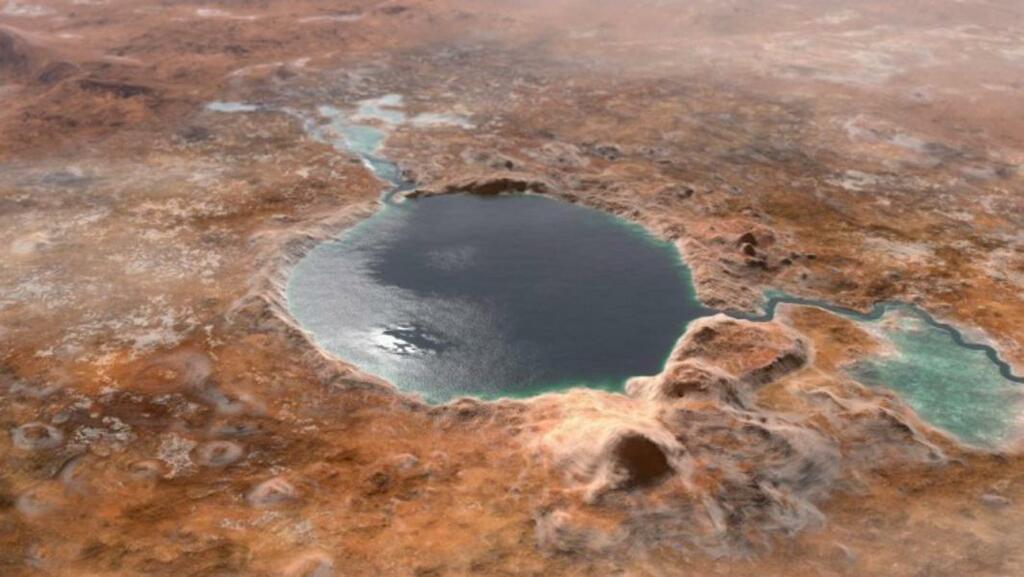 According to a news release by the Massachusetts Institute of Technology, the first scientific analysis of images taken by NASA's Perseverance rover has now confirmed that Mars' Jezero Crater was once a quiet lake, fed steadily by a small river some 3.7 billion years ago.

But the fine-grained clay and carbonate layers deposited in the fossil lake are capped by a diamict, a sedimentary rock consisting of a mix of large and small boulders. Scientists think the boulders were picked up tens of miles upstream and deposited into the former lakebed by episodic flash floods, suggesting a catastrophic climate change in Mars' distant past.

The new analysis, published today in the journal Science, is based on images of the outcropping rocks on the western rim of the crater. Satellites had previously shown that this outcrop, seen from above, resembled river deltas on Earth, where layers of sediment are deposited in the shape of a fan as the river feeds into a lake.

Perseverance's new images, taken from inside the crater, confirm that this outcrop was indeed a river delta. The rover's cameras, Mastcam-Z and the SuperCam Remote Micro-Imager, captured the images from a distance of 1.4 miles (~2.24 kilometers).

A butte informally named Kodiak is especially interesting. The river delta stratigraphy visible on its sides shows how flat layers formed on the lake's bottom are buried by a set of tilted layers, where mud and gravel, carried by the current, slid into the deeper parts of the lake, followed by the topset unit, almost horizontal layers deposited in shallow running water.

When the researchers took a closer look at the images, they noticed large boulders and cobbles embedded in the youngest, topmost layers of the delta. Some boulders measured as wide as 3 feet (1 meter) across, and were estimated to weigh up to several tons. These massive rocks, the team concluded, must have come from outside the crater, and was likely part of bedrock located on the crater rim or else 40 or more miles upstream.

Judging from their current location and dimensions, the team says the boulders were carried downstream and into the lakebed by a flash-flood that flowed up to 9 meters per second and moved up to 3,000 cubic-meters of water per second (like today the Rhine river in Europe).

The lake system and rivers that drained into Jezero crater were likely active around 3.8 to 3.6 billion years ago. The sedimentary succession indicates that for much of its existence, the ancient lake was feed by a gently flowing river. Then the climate became much more extreme, and mudflows triggered by sudden floods deposited large boulders onto the delta. Once the lake dried up, wind eroded the landscape, leaving the isolated hill behind with its vertical sides as we see today. The cause of this climate turnaround is yet unknown.

"The most surprising thing that's come out of these images is the potential opportunity to catch the time when this crater transitioned from an Earth-like habitable environment, to this desolate landscape wasteland we see now," explains Benjamin Weiss, professor of planetary sciences in MIT's Department of Earth, Atmospheric and Planetary Sciences and a member of the analysis team. "These boulder beds may be records of this transition, and we haven't seen this in other places on Mars."

Now that the researchers have confirmed the crater was once a lake environment, they believe its sediments could hold traces of ancient aqueous life.