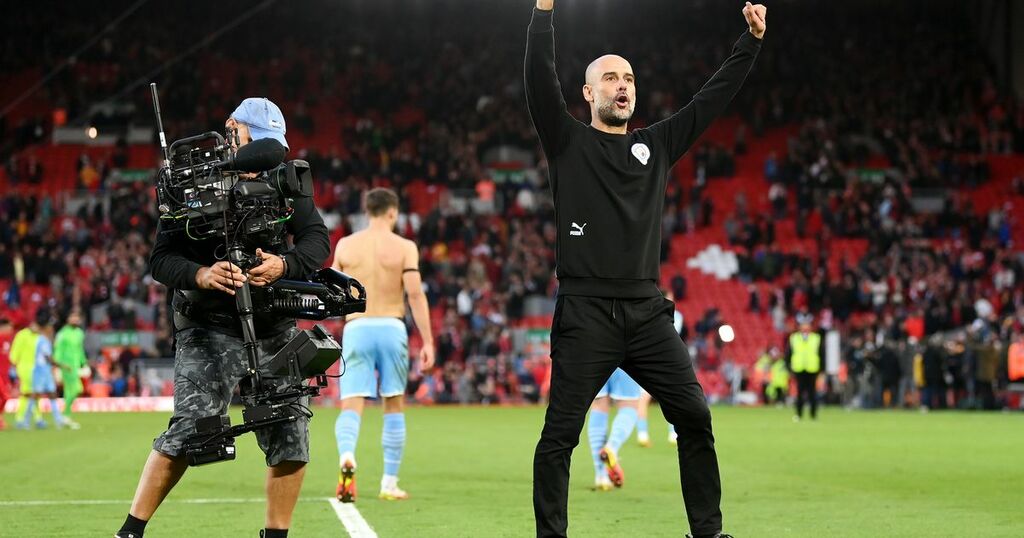 Manchester City lie within striking distance of the Premier League leaders, just two points behind a Chelsea team they beat on their own turf just a fortnight ago.

But it's been a mixed start so far. That Chelsea away win was tempered by a home draw with Southampton, the Champions League blitz of RB Leipzig was cooled by defeat in Paris to PSG.

With an international break giving pause for reflection, we asked Manchester City correspondent Stuart Brennan to give us his assessment of City's season so far.

And then you have your own opportunity to tell us how you think City have fared.

First of all, Stuart Brennan's assessment.

How has the season gone so far?

Until the last week before the international break, Manchester City were probably a solid six out of ten, but that progressed to seven after their excellent win at Chelsea - and two more very good performances at Paris St Germain and Liverpool propelled them up to an eight.

The problem has been the lack of a striker, something that did not stop them from winning the Premier League last season but which has cost them in several games already this season, with points dropped to Tottenham, Southampton and even Liverpool, where they would have won the game with better finishing.

City began last season slowly, and it seemed like this campaign might be the same after the opening-day defeat at Spurs, which was played without Phil Foden, K<yle Walker, Aymeric Laporte, John Stones, Rodri, Bernardo Silva, and Ferran Torres, and with Kevin De Bruyne and Aleks Zinchenko only fit enough to provide brief stints from the bench.

But they have picked up the pace as those players have returned to fitness and, apart from the below-par goalless draw against Southampton, they have been increasingly excellent, and the last week has been a reminder that they are probably still the best team, and squad, in the country.

Verdict on the new signings?

Jack Grealish has made a decent start to life at City, without any real sensation.

The stats reveal his contribution - going into the Liverpool game at the weekend, the £100million man had the joint most chances created in the league to his name, so he has quietly been going about his business.

He has also been willing to sacrifice his personal ambition for the team, which is very important at City, whether that means hugging the touchline to create space inside for other runners, or playing a central attacking role, as he did at Anfield - it was clearly not his best position, but he got on with it without fuss.

His problem now is that Phil Foden, back after injury, was outstanding against Liverpool in Grealish's favoured left-sided slot, a reminder that the youngster was first choice there for City and for England, ahead of Grealish, before he got crocked.

How has the manager performed so far?

Like last season, Pep Guardiola has managed to ride the fact that the club failed to land Harry Kane, or any other striker, during the transfer window, through innovation and careful rotation of that central attacking role - Ferran Torres, Gabriel Jesus, Phil Foden, Kevin De Bruyne, Bernatrdo Silva and Jack Grealish have all played it, to the detriment of their own impact on games.

But he has City playing in classic Guardiola style once more - they pressed Chelsea out of the game for 90 minutes at Stamford Bridge and did the same to Liverpool in the first half at Anfield, while maintaining a high quality in their approach work. That combination of sheer hard work, organisation and top quality is what has made City so successful in the last five years and - even without a striker - it shows no sign of coming apart.

Gabriel Jesus looked like a player who was heading out of the exit door in the summer. As the "other" striker to Sergio Aguero, he still struggled to get a game last season, even with Kun injured, which did not bide well.

The fact that he was also re-invented as a right winger, a role he played early on for Palmeiras, did not cut it for him, either, as he was in direct competition with Riyad Mahrez, Bernardo Silva and Ferran Torres, and arguably |Phil Foden and Raheem Sterling as well.

City would have gladly let him go to help finance a deal for Harry Kane, or even in part-exchange, in the summer.

But an outstanding display as a fast, accurate winger against Norwich, when he laid on three goals, gave notice that he is a force to be reckoned with.

He was rewarded with starting places in the big games at Chelsea and Liverpool, and do well in both, scoring the winner at Stamford Bridge and doing superbly well to tee up Foden for the first equaliser at Anfield.

His exceptional work rate and selflessness - not qualities you expect from a Brazil number nine - have always stood him in good stead, but he is again showing the quality which was evident when he first joined the club in 2017.

What are the team missing?

No prizes for getting this one! The emotional sight of Sergio Aguero departing from Manchester in the summer was a clear indicator that a new striker was needed and with Erling Haaland clearly unavailable, City were reasonably confident they could land Harry Kane, with the England skipper desperately trying to wriggle out of his Tottenham contract.

There was no Plan B, so City have gone into the season without any goalscoring striker, for the first time anyone can remember - last season they had Aguero, even if he was injured for most of it.

Former Manchester United women's team manager Casey Stoney got stick on social media for saying City had a problem scoring goals this season, after they had put five past Norwich and Arsenal and six past Leipzig and Wycombe, to record the highest-scoring start to a season in their 127-year history.

But she had a point, because in tight games like Southampton, PSG, Liverpool and Tottenham, not having a classic finisher, like Kane or Aguero, has cost them points.

Do you think they'll do better, worse or about the same as pre-season predictions?

It depends on whose predictions you listened to!

The more pessimistic City fans - and it is soaked in the bones of those who have supported the club for more than the last 13 years - thought the failure to buy a striker would prove a step too far.

Their main title rivals have all strengthened either through buying (Romelu Lukaku, Jadon Sancho, Cristiano Ronaldo, Raphael Varane) or getting key players back from injury (Van Dijk, Gomez) but even the addition of Grealish simply added another quality attacking player that they arguably did not need.

But City constantly confound their own fans by proving to be better than you suspected. Few gave them a chance at Chelsea, but they dominated, they were unlucky at PSG and probably should have taken three points off Liverpool, all in the space of a week.

The lack of a goalscorer could yet see them drop more points, and with others having improved, they face a real fight just to match last season;s achievement of a comfortable title win, League Cup and Champions League final spot.

Now it's your turn to tell us what you think ...