Residents on a housing estate say they are "left in limbo" after being told not to drink, cook with or give tap water to their pets.

Ancala Water Services has warned residents in St Athan, south Wales, it's not safe to consume the liquid but is yet to give further details about why.

The supplier has provided people with bottled water, which was delivered on wooden pallets on Thursday night and again on Friday, but one local has branded the situation "ridiculous".

The resident, who asked not to be named, told Wales Online : "We didn’t know anything about it until we got a letter in the door about 3 o’clock yesterday.

"We don’t know what’s wrong, we were just told it was contaminated. We can’t drink it or brush our teeth or anything.

Have you been affected by this issue? Let us know at webnews@mirror.co.uk

"They delivered bottled water yesterday. They said it was coming at 5 o’clock but it came at 8 o’clock. Of course everyone was diving for it then.

"They didn’t tell people to take it based on how many are in their house, so you had some people coming away with a few crates while others got nothing. We don’t know when it’s coming back. It’s absolutely shocking."

St Athan residents must only use tap water for washing, laundry and flushing toilets for the time being.

But Nathan Norris-Evans, 21, and his neighbours want answers.

"We can’t cook with it, drink it, feed our pets. It’s a right pain in the a**e. We got the letter on our doorstep, not even through the door. But we don’t know anything about what the issue is or how long it’s been contaminated for," Nathan, a pet owner, said.

"I’ve been away on holiday so I wasn’t drinking it until yesterday but my mum has been here the whole time. They put out bottled water last night but just left it there. We didn’t know until we looked out the window and saw it.

"We’ve got rabbits we can’t give water to. They’ve said if you boil it up it should be okay but they wouldn’t recommend it.

"That’s not really much to go on. We’ve been told it could be a few days [before it’s back]. We just want answers."

Susan Johnson, 75, said: "It was most unexpected. I was completely shocked. I’ve lived here for years and we’ve never had any problems with water before.

"Up at the hall I know they were giving out bottles of water. I was able to get someone to drop me over six big bottles. You can imagine me trying to carry a big crate at my age.

"So I’ve got enough to last a few days. I’ve done my washing, the washing up will be fine. You just have to get on with it, what else can you do?"

One new parent said: "We’ve got a six-month-old baby and we weren’t told about this until Thursday afternoon. We were making her bottles. The water was boiled, but we don’t know anything about what’s wrong except that the water is contaminated.

"They were out at 10 o’clock last night putting out bottled water pallets and it was a free for all. Nobody was checking whether you lived in the estate or anything.

"We’ve been left in limbo. To be honest it’s concerning. We got a letter through the door and that is all we’ve been told. People have been left ringing to find out what’s going on."

Residents have been told to expect another delivery of bottled water at 10am on May 13, but there is no formal indication of when they will be able to use their taps again. 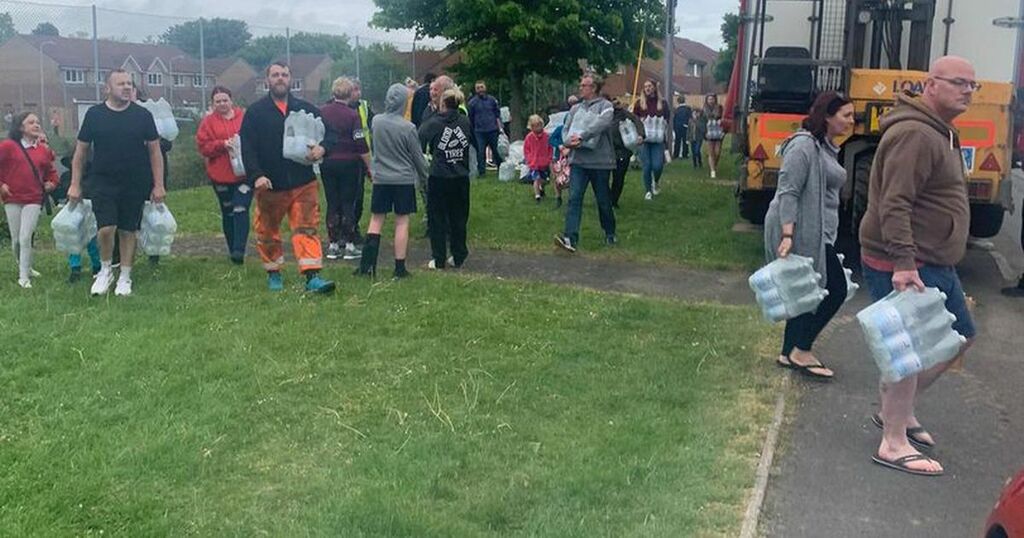 People warned NOT to drink, cook or brush teeth with tap water in urgent letter
Residents of St Athan, Vale of Glamorgan, in Wales have been told to not drink, cook with, or give tap…

Wales Online
Residents in St Athan told not to drink, cook with or let pets use tap water