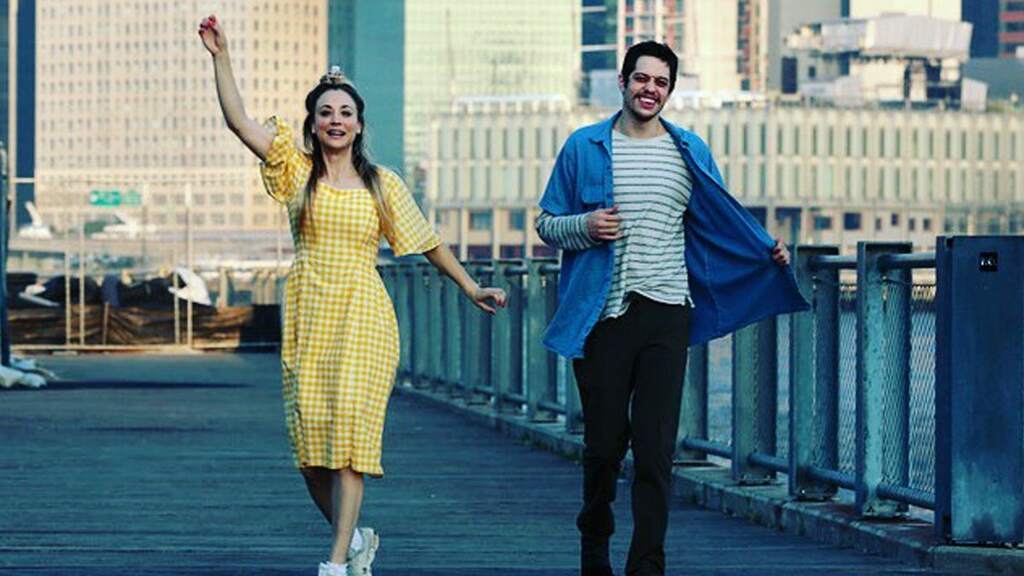 A hot minute since she revealed she was splitting with her husband, the rumour mill is in overdrive with theories that Kaley Cuoco might be seeing Pete Davidson. Well well well, what do we have here then?

Kaley revealed her and husband Karl Cook had filed for divorce earlier this month, which a source has since told People was “pretty shocking” and seemed sudden to their friends. Naturally, the rumours came in thick and fast about what’s spurred it on.

After the announcement of her divorce, Kaley returned to filming her next movie, a rom-com called Meet Cute, in which Pete Davidson plays her love interest. Knowing this, and looking at the kind of things she’s been posting online about the film, plenty of people are thinking there are some dots to be joined here.

These piccies have people going off like a frog in a sock about the pair, and whether there is or isn’t something going on off-script. Hell, even I’m looking at these pics with eyes like the side-eye emoji. The energy emanating from them, my gourd.

Not only just because of Kaley’s sitch at the moment, but also because Pete recently split up with his girlfriend – Bridgerton‘s Phoebe Dynevor – which also hasn’t been missed by fans.

pete davidson and kaley cuoco start working together and then both of their relationships fall apart…? interesting.

If it transpires that Kaley Cuoco left her husband for Pete Davidson, I think he should have to tell us whether being irresistible to women was his first, second or third wish from the genie and where he found the lamp.

The whispers have only been strengthened by an insider on the film, who told The Sun that the pair have grown close on set and the “chemistry is palpable”.

I must stress this is a source who has told a tabloid rag, so please grab your grain of salt for the following bit.

“Pete and Kayley have got on incredibly well since day one but as the weeks have passed, it’s become clear there is some attraction there,” the source said.

“Obviously they play a couple in the film and it’s all very romantic and sweet. But the chemistry between them is so palpable, it’s all people could talk about on set.

“When the cameras stopped rolling they’d be cracking jokes and were clearly enjoying one another’s company.”

Look, this could all be some well-spun PR for their new movie together. I mean it is a rom-com so it’s not surprising we’re seeing on-set shots of Kaley and Pete holding hands and looking all smitten. We all could be looking into this waaaay too hard, but it can’t be denied – they do look pretty bloody cosy together.

The post People Are Suss On Kaley Cuoco And Pete Davidson & The Rumour Mill Is In Fkn Overdrive appeared first on Pedestrian TV.