China’s Pacific plan is ‘clear’ but so is Australia’s intention to be regional partner of choice, Penny Wong says

Australia has responded to reports that China is pursuing a Pacific-wide security pact with almost a dozen nations, stating that while Beijing’s intentions were clear “so too are the intentions of the new Australian government” to be the partner of choice in the region.

Australia’s new foreign affairs minister, Penny Wong, will travel to Fiji on Thursday in an early sign of her determination to deepen the relationship with Pacific countries.

“China has made its intentions clear [but] so too are the intentions of the new Australian government,” Wong said in a statement.

“We want to help build a stronger Pacific family. We want to bring new energy and more resources to the Pacific. And we want to make a uniquely Australian contribution including through our Pacific labour programs and new permanent migration opportunities.”

The Australian foreign minister said she would be a frequent visitor to the Pacific.

Wong earlier on Wednesday declared the incoming Labor government had a lot of work to do to recover Australia’s status as the partner of choice in the Pacific after a “lost decade” of Coalition rule.

Wong’s travel to Fiji coincides with an eight-country trip to the region by China’s foreign minister amid growing competition for influence in the Pacific. Australia’s new diplomatic offensive follows Wong’s participation in a meeting of the quadrilateral security dialogue in Tokyo.

During the trip back to Australia on Wednesday, Wong told travelling reporters: “Look, after a lost decade we’ve got a lot of work to do to regain Australia’s position as the partner of choice in the Pacific, in a region that’s less secure and more contested. But that work starts now.”

Multiple sources have told the Guardian that China’s proposed regional security deal had not been received well by Pacific leaders and was unlikely to be signed by all nations.

A senior diplomat in the region said some leaders had “big concerns” but “there has been a vacuum left in this region from traditional partners – they have to work extra hard to win back the hearts of Pacific people”.

The diplomat said the deal was not guaranteed. “We will work through our regional architecture to ensure security and stability of our region is maintained under international law.”

The Albanese government has signalled that a more ambitious climate policy will be a key plank in its strategy to ensure Australia is seen as “a generous, respectful and reliable” partner to Pacific countries.

Wong said the early visit, during her first week in office, demonstrated “the importance we place on our relationship with Fiji and on our Pacific engagement”.

“I will travel to Fiji to strengthen our Vuvale [family] partnership and to discuss how we can best secure our region and help build a stronger Pacific family,” she said in a statement.

“Australia will listen to our Pacific partners as we work together to face our shared challenges and achieve our shared goals – including tackling climate change, pandemic recovery, economic development and regional security.”

Wong will meet with Fiji’s prime minister, Frank Bainimarama, who told Albanese in a tweet after the election: “Of your many promises to support the Pacific, none is more welcome than your plan to put the climate first.”

Wong’s schedule also includes a meeting with a group of female leaders ahead of next month’s Pacific Islands Forum Women Leaders meeting.

She will meet the secretary general of the Pacific Islands Forum, Henry Puna, and deliver a speech about “the new energy and commitments Australia is making to play our part in strengthening our Pacific family”.

While Fiji is the only country on the agenda for this first trip, it is understood Wong plans to travel widely in the Pacific in the lead-up to the Pacific Islands Forum in July.

During the election campaign, Wong characterised the signing of a security deal between China and Solomon Islands “on Scott Morrison’s watch” as the biggest Australian foreign policy failure in the Pacific since the second world war.

But China’s engagement in the region has seen an “uptick in tempo”, as it looks to cement relationships and sign a raft of economic, infrastructure and security deals.

China’s foreign minister is due to visit Solomon Islands, Kiribati, Samoa, Tonga, Vanuatu, Papua New Guinea, Timor Leste and Fiji between 26 May and 4 June, on a tour of the region that has been labelled “extraordinary and unprecedented” by Pacific experts.

Journalists seeking to cover the Solomon Islands leg of the tour for international outlets say they have been blocked from attending press events, while those journalists who have been allowed access are extremely limited in their ability to ask questions.

Labor’s election policy included an effort to “restore Australia’s place as first partner of choice for our Pacific family”. The package included a $525m increase in aid to the region over four years.

In an attempt to reach out to regional leaders, Wong recorded a video message shortly after being sworn in to office on Monday saying she looked forward to an early visit to the Pacific. In the video, Wong said the new Australian government would “listen because we care what the Pacific has to say”. She said the government had heard the message “that nothing is more central to the security and wellbeing of the Pacific than climate change”.

Labor has pledged to increase Australia’s 2030 emission reduction target to 43% compared with 2005 levels, and will seek to jointly host a UN climate conference with Pacific countries. But regional leaders have previously indicated they would like to see Australia go further, including with curbs on coal and gas projects and fossil fuel exports.

The Pacific Elders Voice group said in a statement last month that growing military tension in the Pacific region “created by both China and the United States and its allies, including Australia, does little to address the real threat to the region caused by climate change”.

Australia in 2018 signed up to the Boe declaration, reaffirming climate change as “the single greatest threat to the livelihoods, security and wellbeing of the peoples of the Pacific” and committing to action to implement the Paris agreement.

But Bainimarama described Morrison’s approach during the PIF leaders’ retreat in Tuvalu in 2019 as “very insulting and condescending”. Climate policy was a flashpoint at that meeting.

Wong said she looked forward to sharing ideas “on how we seek to bring together Australia’s defence, strategic, diplomatic and economic capabilities to support our region’s priorities”. 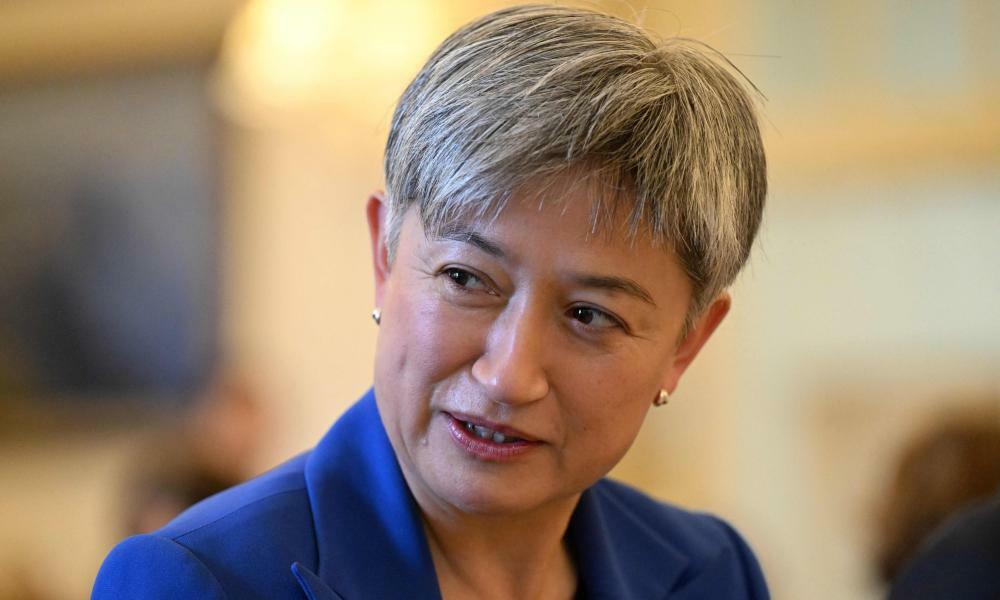 The Guardian - AU
One subscription that gives you access to news from hundreds of sites
China says it has 'no intention' of building military base in Solomon Islands, Penny Wong visits Fiji as part of Pacific reset