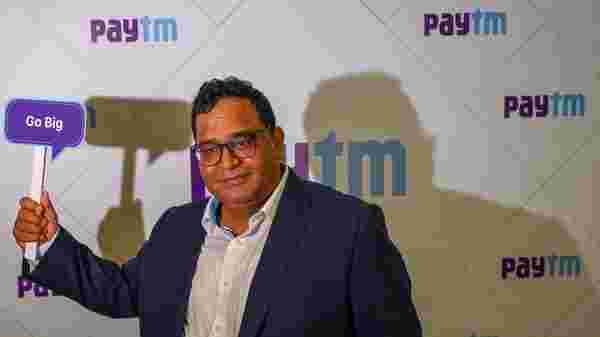 The founder and chief executive officer of One 97 Communications Ltd. compared his company to Tesla Inc. -- and by extension drew parallels between himself and Elon Musk -- after the Indian payments startup suffered a brutal first-day plunge following its initial public offering, Bloomberg reported.

Vijay Shekhar Sharma held a four-hour town hall to rally employees who had watched the company’s stock plummet on listing day, according to people who had attended.

After plunging around 27% after listing on Thursday, Paytm shares today further crashed near 13%.

On Monday, shares of the digital payments startup opened with a downside gap of ₹51.80 apiece, and went on to lose around 13% from its listing date close of ₹1,560.80 per shares on NSE.

After the listing day crash, Paytm released business update for the month of October. Gross merchandise value (GMV) rose 131% to $11.2 billion for the month, the company said. Loan disbursal, which analysts see as key to Paytm turning profitable, increased more than 400%.

43-year-old Sharma in the town hall encouraged the employees to look past the initial stumble and to focus on the long-term opportunities for bringing digital payments to the country’s fast-growing internet population. One 97 Communications is the parent company for the Paytm service.

Sharma, who has tweeted about his admiration for Musk and his purchase of a Tesla vehicle, reminded employees that the electric vehicle maker’s stock used to be the among the most-shorted in the world. But the company overcame years of struggle to become one of the most recognized brands globally, he said, as well as the most valuable automaker in the world.

In July 2020, when Tesla overtook Toyota Motor Corp. to become the world’s most valuable automaker, Sharma praised the founder.

"After so many naysayers and people attempting to pull @elonmusk down, he has proven what he is made of!" Sharma said in that tweet, signing off with the Hindi aphorism: “One day, my time too will come."

Tesla shares actually rose 41% the first day after its IPO in 2010. They later fell to less than $4 each and have since surged to give the company a market value of more than $1 trillion.

Paytm raised a record IPO sum, but its disastrous trading debut sparked criticism the company and its investment bankers had pushed too hard in the offering. Vijay Shekhar Sharma had persistently made clear that he wanted Paytm to surpass the long-standing IPO record set by Coal India Ltd. in 2010.

Critics have questioned Paytm’s prospects in recent months. While sales at its core payments and financial-services arm rose 11% in the year ended in March, overall revenue dropped 10% amid intensifying competition, the company reported in July.