Paul Bongiorno: Albanese poised for victory as Morrison struggles to save himself

Scott Morrison may be hoping and praying for a second miracle win, but late last week he conceded Australians were looking for a change in the way their government operates.

In one fell swoop there was an admission that the “devil you know” argument was no longer cutting it because his record was no longer the shield he was counting on it to be.

So we had a dramatic pivot.

“As we go into the next period on the other side of the pandemic, I know things that are going to have to change with the way I do things” Morrison said after admitting he had been “a bulldozer”.

The Prime Minister said that was because, as his wife Jenny says, it’s typical of “the Morrison men” when they have to solve problems.

He now assures us that he has learned the lessons of the past three years and is ready to change gears.

Just think about that.

Six weeks ago on Paul Murray’s after-dark show on Sky News, to the great amusement and applause of the partisan crowd in the pub, Morrison boasted “what you see is what you get”.

Morrison ridiculed Anthony Albanese’s makeover, his loss of weight and his new glasses.

He said he was happy in his skin and added, if you don’t know who you are as PM, how can other people?

Now Scott Morrison is promising what you see is not what you are going to get. All of a sudden there is a new unknown in the equation.

Albanese is not buying any of it and it is difficult to see how anyone could.

The Labor leader says the Coalition has been in government for almost a decade and Morrison PM for four years “and what he is saying is if you vote for him, he’ll change”.

Based on the quotes from Deputy PM Barnaby Joyce and veteran Liberal senator Concetta Fierravanti-Wells being used in Clive Palmer’s ads, you can’t trust a thing the Prime Minister says anyhow.

The bulldozer analogy is in itself delusional.

Morrison is under fire not for doing unpopular but crisis-solving things, but rather for being late to act and ineffective when he does.

As Sean Kelly observed in The Sydney Morning Herald, “on climate, on vaccines, on bushfires and floods, it was not brutal speed that hurt him but stubborn sloth”.

He didn’t show up and he “doesn’t hold a hose”.

Morrison blames Labor for its successful character assassination of him.

But the Hawaii holiday, lying to the French president, the failure in Solomon Islands, aged-care neglect, the Robodebt scandal, the ignoring women’s issues recommended by the Respect@Work report and arguing against a real wage rise for the lowest paid are all Morrison’s work.

Is it little wonder that the average of the published opinion polls for Labor’s lead, including the latest Newspoll at the weekend, has been stuck on 8 per cent?

If the PM hopes that a hotly contested, reckless housing package, billed as a stroke of genius by his cheer squad in the media, can bridge that gap in four days then surely he is dreaming.

Morrison is counting on the regions and outer suburbs to save him and has been campaigning in Labor seats like Dunkley and McEwan in Victoria, but he must know something that the extensive YouGov poll in The Australian didn’t find last week.

According to a Liberal source, the party estimates Morrison is a 3 per cent drag on its vote.

The ghost of 2019 has everyone too afraid to tell it as it is and certainly the Labor Party is keeping its excitement in check despite so many of the basics being stronger for a change of government this time.

It is true that Anthony Albanese has not ignited the imagination of the nation but he is not seen as a scary or worse option than the devil we know – the only explanation for Labor’s persistent winning lead in all the polls.

For that reason I for one will be shocked if we do not see a majority Labor government after Saturday.

Albanese says Australians are suffering from conflict fatigue, he says Morrison can’t and won’t change and “that’s why people need to change the government”.

The signs are millions agree with him.

Paul Bongiorno AM is a veteran of the Canberra Press Gallery, with 40 years’ experience covering Australian politics. 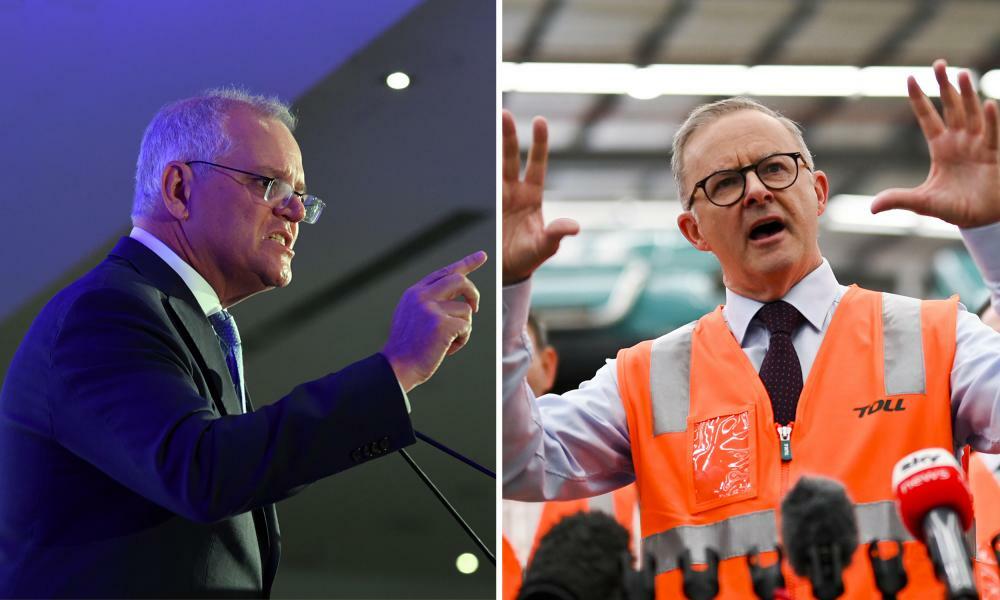 Scott Morrison tells A Current Affair ‘jobkeeper saved the country’ – as it happened
Prime minister tells Tracy Grimshaw ‘I could have been more sensitive at times’; nation records 66 Covid deaths. This blog…