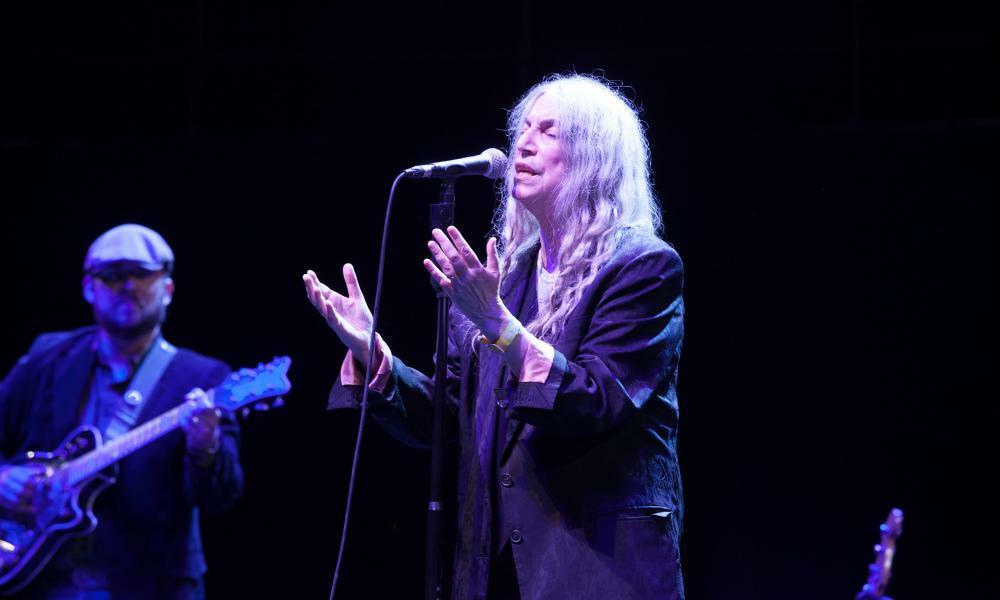 One worn black boot on the monitor, her long, white, artist’s hands carving up the air, Patti Smith is a performer who asks for no quarter. Her rakish authority has only been cemented by the passage of time since she started out, her uncompromising poetry accompanied by the lash of proto-punk early 70s electric guitar.

Tonight, Smith’s sonorous voice lends itself as easily to a howl on her best-known songs as it does to a tender croon for her cover of Stevie Wonder’s Blame It on the Sun. “Free money!” she shouts, both hungry and sneering, channelling the yearning of her mother whose hopes for better hinged on a lottery ticket. Ain’t It Strange, a reggae-leaning track from Smith’s 1976 album Radio Ethiopia, is intense, foreshadowing Nick Cave with its “hand of God” refrain. “Transcend! Transcend!” she seethes.

Around Smith, a full-strength band rev up to take-off velocity. She often travels with a more pared-down outfit, or as a solo act for poetry readings. But for this first of two gigs at the Albert Hall, her day-one associate Lenny Kaye is on guitar. According to a chapter extracted in Mojo magazine from his forthcoming book, Smith sought out Kaye, then a record store guy compiling a yet-to-be famous garage rock box set, Nuggets, at the behest of her friend, the playwright Sam Shepard. Fellow seasoned travellers Jay Dee Daugherty and Tony Shanahan are on drums and keys/bass respectively. Smith’s offspring, Jackson (guitar) and Jesse (keyboards), are players whose roles defy nepotism.

You never quite know which Patti Smith is going to turn up – the poet who collaborated with Soundwalk Collective for a trilogy of spoken-word-with-sound albums across 2019 and 2020 or the author of a series of acclaimed dream-state travelogues – 2019’s Year of the Monkey is her most recent. This, however, is declaiming, seer-mode, rock’n’roll Patti – generous with the Rolling Stones covers (“this one’s for Charlie!”), egging on Kaye’s wiry flurries, prancing and rearing like the horses in the fever dream of Johnny, the protagonist of her 1975 song Land.

You get a sense of the road travelled from Smith’s hardscrabble New Jersey beginnings to this imperial cathedral from her riveting rendition of Piss Factory, her acclaimed poem about being bullied for doing her industrial piecework too quickly – she quit and sought her artistic fortune in New York City.

After her agent had tried for some time, Smith finally got the go-ahead to play the Albert Hall in 2020, she confides. And then came “an extraordinary time”, when we all made “memories we did not have to have”.

Thankfulness comes in two forms tonight. Smith’s 2000 song Grateful soothes the listener: “it will all come out fine”. Mid-set, though, we get the towering achievement from her third decade in the game. The 1996 song Beneath the Southern Cross was written after the loss of her husband, Fred “Sonic” Smith of MC5.

The two chiming acoustic guitars set up a simple, recurrent figure, droning and implacable, as Smith’s incantatory words hover in the air. At the track’s peak is a fresh call to life. She commands the audience to raise their arms and “feel your blood”, which has not been “stagnant” but “pulsating” in us throughout 2020. “We are fucking alive,” she bellows at a crowd long since on their feet, baying their agreement and surging towards the foot of the stage, “and we are free!”

During Covid, Smith, also a visual artist and photographer, began documenting her everyday surroundings on Instagram. She also joined the paid-for newsletter provider Substack; her output is called The Melting. She recently told the Los Angeles Times that during lockdown, stir-crazy and struggling to write when not travelling, her local cafe allowed her to move one of its tables and chairs to her apartment.

These rescheduled gigs aren’t pegged to any particular record or publication, but Smith did recently release a seven-track live EP on Spotify as part of its Live at Electric Lady Studios series. Inspired by Jimi Hendrix, who recorded there, Smith laid down her first demos at NYC’s Electric Lady; Kaye reports in his book that Smith’s flatmate, the artist Robert Mapplethorpe, put up the money. Tonight, she plays one of those live tracks, Bob Dylan’s One Too Many Mornings, recounting how she used to moon over “the guy that writ it” as a teen.

Naturally, the goosebumps come back out again for Land – less a song than an EP in itself that follows Johnny into a fugue state in the aftermath of an assault. Smith has brought Johnny bang up to date. He is “every gender, every race, every persuasion… all things”.

He surveys the world, polluted, full of “debris”, and invokes nature, pledging to sacrifice himself for “every species”. Tonight the song ends with Smith singing singing “Jesus died for somebody’s sins, but not mine”, but it sounds like Johnny is ready to take the hit for all of us.