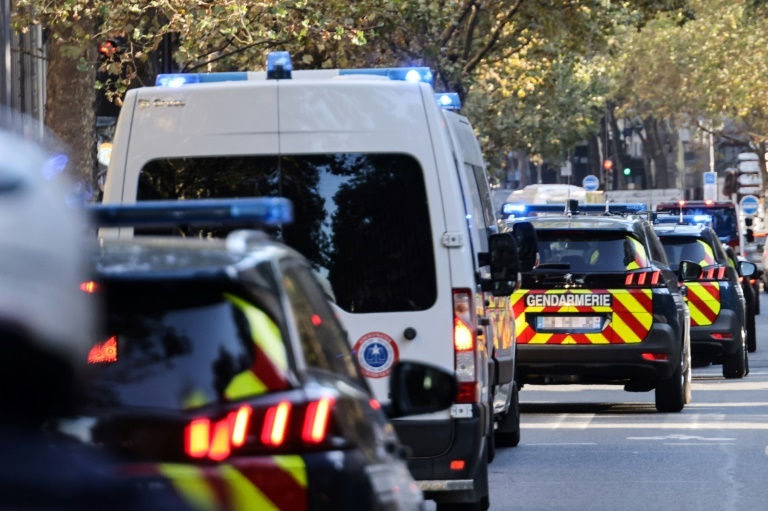 Paris (AFP) - The last surviving assailant of the November 2015 attacks on Paris appeared in court on Wednesday at the start of a historic trial over the night of horror that sent shockwaves through France.

The proceedings are expected to last nine months in a purpose-built facility in the city centre and will constitute the biggest trial in the country's modern history.

The suicide bombing and gun assault by three teams of jihadists on bars, restaurants and the Bataclan music venue -- planned in Syria and later claimed by the Islamic State group -- left 130 people dead and around 350 physically injured.

A total of 20 suspects have been charged, including surviving attacker Salah Abdeslam who fled Paris for Brussels in the chaotic aftermath of the bloodshed after discarding his suicide belt.

After refusing to cooperate with French investigators, the 31-year-old stated his Islamic faith as he was asked to identify himself on Wednesday, saying "there is no god but Allah".

Wearing a black t-shirt and sporting a long black beard and swept-back hair, the Franco-Moroccan national was also asked to confirm his profession and the identity of his parents as part of standard first-day trial formalities.

"I gave up all professions to become a fighter for the Islamic State," replied the former pot-smoking petty criminal, adding that "the names of my father and mother have nothing to do with this".

A total of 14 defendants are being tried in person and six others will be judged in their absence.

The trial will last until May 2022 with 145 days of scheduled hearings involving about 330 lawyers, 300 victims and testimony in November from Francois Hollande, who was French president at the time of the attacks.

"He must speak to victims," Hollande urged Abdeslam on France info radio."If he does not say anything, his cowardice will be even greater than what we assume it to be today."

The start of the trial has been long-awaited by some witnesses and victims' families who are hoping for clarity and closure, while for others it represents the reopening of painful wounds.

The attack on the Bataclan, when 90 people mostly in their 20s and 30s were massacred as they watched a rock concert, represented the most traumatic of a string of separate attacks claimed by Islamic State over the course of several years.

"I have to be here for his memory," Cristina Garrido, whose 29-year-old son Juan Alberto died in the Bataclan, told AFP on Wednesday.

She said she hoped Abdeslam would be given a full-life prison term, but "I know too that the sentence the court hands down will not reduce my pain.I will suffer and I'll miss Juan Alberto to the end of my days."

Arthur Denouveaux, a survivor of the Bataclan attack and president of Life for Paris, a victims' association, said that the trial meant "we are entering the unknown".

"We're eager for it to start but we're wondering how it's going to go over the next nine months," he told AFP.

The files for the trial run to a million pages bound in 542 volumes, detailing an investigation that has revealed links between the jihadists and their handlers from Syria to Brussels and Paris.

Details of how the squad of killers managed to enter France undetected, using the flow of migrants from Islamic State-controlled regions of Syria as cover, is likely to one of the areas of interest during proceedings.

Some victims' families are also wondering if there were any missed opportunities by security forces to prevent the bloodshed.

As well as Abdeslam, the other 13 accused present in court -- who face charges ranging from providing logistical support to planning the attacks as well as weapons offences -- were also asked to give their names, addresses and professions on Wednesday.

They include Osama Krayem, a Swede whom Belgian investigators identified as one of the killers of a Jordanian pilot burnt alive in a cage by IS in early 2015 in Syria.He is also under investigation in Sweden for war crimes.

The alleged coordinator, Belgian citizen Abdelhamid Abaaoud, was killed by French police northeast of Paris five days after the attacks.

The other nine attackers were either shot dead or blew themselves up.

Of the six tried in absentia, five are presumed dead, mainly in air strikes in Syria.

The horror was unleashed late on Friday, November 13, when the first attackers detonated suicide belts outside the Stade de France stadium where Hollande was watching France play a football match against Germany.

A group of gunmen, including Abdeslam's brother Brahim, later opened fire from a car on half a dozen restaurants.

The massacre culminated at the Bataclan.