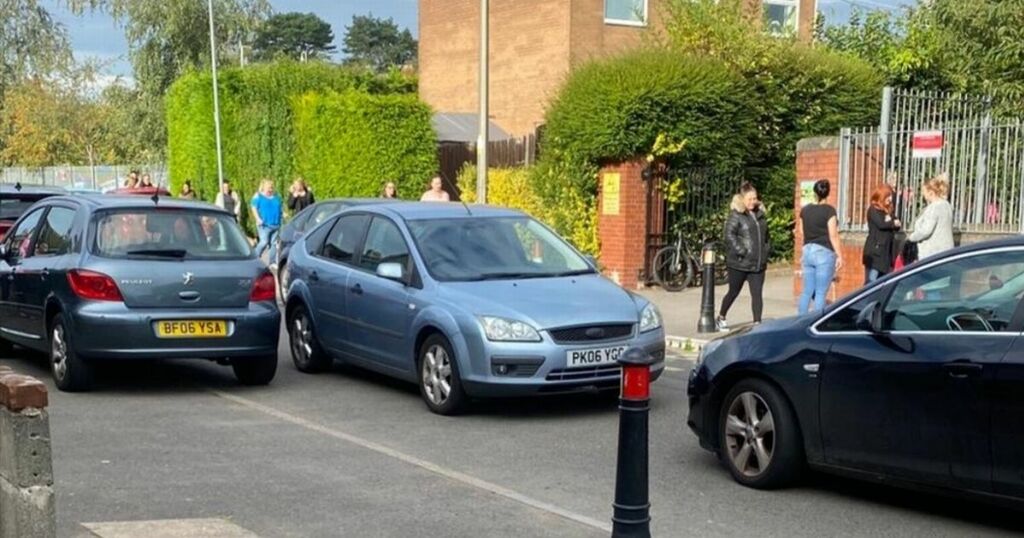 Parents and residents have described "carnage" caused by "dangerous" parking on a street outside a primary school in Cardiff.

The traffic and parking outside Hywel Dda Primary School on Cambria Road in Ely have become an issue for parents and residents, who say that they are too scared to allow their children to walk down the road alone.

"The traffic is coming from everywhere - both ends. The congestion is absolutely awful," said Ely resident Katherine Evans.

Read all of our Cardiff stories here

Katherine, 46, has two children at the school and says that she has seen people parking over people's driveways and on the pavement of Cambria Road.

"There's a few disabled people living along there as well, so obviously they haven’t got access to the drives because they’re parking up the drives, and if you ask them to move they just give you a mouthful of abuse," she said.

She continued: "Our main concern is the safety of the children.”

Katherine says that her children, aged eight and nine, are independent and road-savvy, but that she has reservations about letting them walk down the road alone.

“I wouldn’t let them walk down that road without them being quite close to me,” she said.

Katherine added that she has seen people with prams having to walk in the road as people have parked on the pavement. She added that some residents with illnesses have been unable to access their driveways when needed, sometimes causing them to miss appointments.

Tina Phillips, 33, has lived on Cambria Road for three years. She said "congestion in the street is an absolute joke" adding "it's carnage".

Councillor Andrea Gibson, an independent councillor for Ely, has been working with parents and residents to attempt to solve the issue.

"In January this year we put a petition in asking for the 'safe school streets' scheme to be put in place, so there would be cameras in the street and at the beginning and end of the day the road is basically closed off apart from residents or anyone with a disabled badge. It’s worked in other schools in Cardiff," she said.

Cllr Gibson said that she received a reply from the Cabinet Member saying that it would start in June of this year, however, she says that it was then put off until the September.

"Then we heard nothing at all. When I made enquiries I was told that officers had taken a look at the area and thought it wouldn’t be a very good idea to close the street because of the impact the traffic would have on the surrounding streets," Cllr Gibson continued.

“I’ve kept nagging and going back and saying ‘Please can you look at it again.’ I’m sure there is some way it can be done, because the situation is dire in that street. It’s so dangerous for the children. I keep, really, getting the same answer - that the officers have taken a look at it and that they would come up with some ideas and consult with us. They haven’t actually consulted with the residents as far as I’m aware."

Cllr Gibson said that she has seen the parking situation for herself and described it as “awful.” She says that she has received photographs and videos of the situation from residents.

“It’s been like that for many, many years, so it’s not a new thing. It’s been like that since before I was a councillor. I don’t know what sort of solution, apart from closing the street off, that the officers are going to come up with."

She added: “The way that the officers have looked at the issue, I think, they’re coming from [the perspective of] the surrounding streets. But what I said was the surrounding streets, while there may be an issue with parking - and one is a cul-de-sac I think so there might be issues there - the traffic won’t be as concentrated if that street is closed off and parents will have to park in a broader area so the traffic is bound to be safer.

Eve Baker, 41, has lived on Cambria Road since she was three years old. With a daughter attending Hywel Dda Primary School, she says the situation with parking on the street can be "quite scary."

“I live down the bottom end, so traffic doesn’t really bother me down this end, but it’s just that when I’m walking my daughter up to school, the way that they park is just absolutely shocking. If they see a little gap, people just reverse and their whole car will be on the pavement," she said.

Another Cambria Road resident who says they have lived on the road their whole life said they have seen fights and arguments outside the school, as well as people leaving cars in the middle of the road.

“They’re not caring where they park and children are having to walk into the road to be able to cross the road because they can’t see past the cars," they said.

“I feel a lot for the people who live around that area, because a lot are elderly and there are a few who have children with disabilities, so they can’t get off their drives because parents are parking across there.”

The resident said they feel nervous for their daughter and other children walking near the school and angry on behalf of the residents in the area.

They added that people have driven onto the pavements, despite bollards being in place, and said people are even causing damage to their own cars to do so.

Another Cambria Road resident, who has lived on the street for 20 years, said that, while they don’t see much of a problem with parking at the bottom end of the road, they park their car over their drive to ensure that they can get out.

“It’s having to do things that you wouldn’t really expect to have to do - move your car so you don’t get blocked in,” the resident said.

They added: “I know people who live in the street behind and they drive their car [to the school] - where’s the sense in that? You should be promoting walking to school. They live around the corner and park outside the school gate every day,” they said.

“The children’s safety should be paramount. You’ve got people parking on zig-zags outside the school, people double parking. There’s parked cars all the way up the street, from one end to the other, and then people parking next to those, leaving literally enough room for one car to squeeze through. So, if cars come either way, it comes to a bit of a standstill.”

The resident said that the situation is “horrendous” when picking up their child from school.

“I wouldn’t want my child riding a bike to and from school - I really wouldn’t,” the resident added.

A spokesperson from Cardiff Council said: “The council is currently delivering a programme to engage with schools to support them, and provide improvements, so they are able to develop active travel plans to encourage children to walk, scoot, or cycle to school.

“Fifteen 'school streets' schemes are already in place in Cardiff, where the road outside the school is closed to stop parents dropping their children off at the school gates during morning and afternoon pick-up times.

“Parking problems and issues with traffic outside Ysgol Hywel Dda were first brought to our attention last summer (2020) when schools re-opened after the first Covid-19 lockdown.

“At this time, officers identified Cambria Road as a potential option for a ‘school streets’ scheme, but due to where the school is located, careful consideration must be given, so the problem isn’t just moved onto neighbouring streets.

“This is very much the case with Ysgol Hywel Dda, as there are several streets connecting to Cambria Road, so we can’t simply move the problem elsewhere.

“Officers have developed potential options to implement a school street scheme for Ysgol Hywel Dda which will be shared with ward councillors shortly, before carrying out a full public consultation in the next few weeks with the school community and residents living nearby the school

“This month, Ysgol Hywel Dda will also be taking part in the walk to school challenge, along with 44 other schools in the city, which is a partnership between Cardiff Council and Living Streets Cymru.”

To get the latest news from CardiffOnline in your inbox, click here.