Pandemic love story: The whims of Kevin, our neighbors' cat 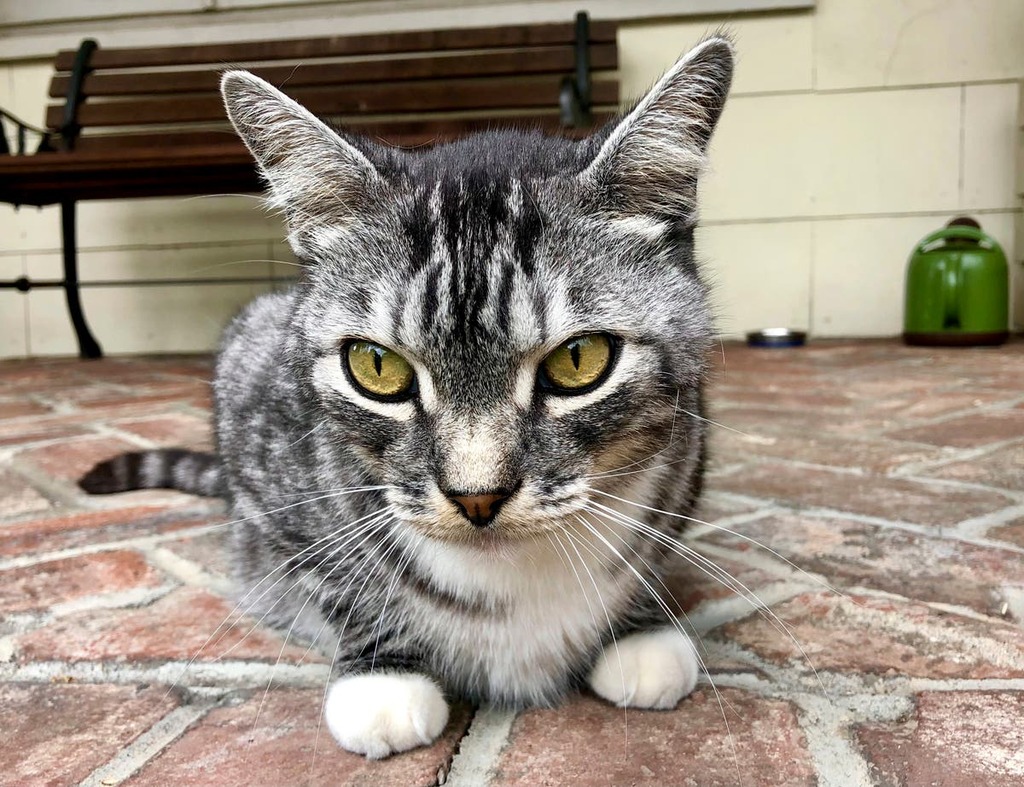 His name is Kevin

Kevin, with gray, black and white tiger stripes, his furry underbelly white, his eyes bright yellow. “What’s the name of your cat?” we asked our neighbors. “Kevin.” “Kevin?” Yes.

A random and perfect name for a cat.

For the almost decade that we’ve lived at our rental house here, my husband Dave and I didn’t know or see Kevin. For years, he existed in the crevices of our next door neighbors’ house, a fuzzy ball of affection waiting to be discovered. An indoor-outdoor tabby, he apparently visited other people in the neighborhood, but not us.

Last year, as my staff senior writer job at a college hard-pivoted from working in an office to working remotely from home, due to the pandemic, and my creative life as a musician ground to a homebound halt, Kevin came by a few times when I sat at a tiny outdoor table on the side of our place. He rubbed against my leg. After that — whoosh — he disappeared.

Then, this year, in mid-March, we saw Kevin on our porch.

He came over to me, staring up with those big, yellow, serious eyes. He flopped onto his back, and he let me scratch his head. I documented the moment on social media: “Made a new friend today. Kevin, our neighbors’ cat. Comforting to pet him, and he loves the attention.”

Day by day, Kevin started coming around regularly. His routine was always the same: He would suddenly show up, stare at us with a silent urgent meow, and then walk back and forth rubbing his face on our wooden porch bench. He would allow us to bend down and pet him with long strokes. It always seemed like a privilege to pet him: this deeply affectionate neighbors’ cat who was as shiny and new to us as we were to him.

In mid-April, Dave went to a pet store and bought Kevin a squeaky toy — a small mouse with gray fake fur and a wispy feather tail. Kevin would pounce on it with glee. Squeak, squeak, squeak! By that time, I was fully vaccinated against COVID-19, and Dave a month later. Kevin’s owners were vaccinated too.

Sometimes at night we would hear a thump, peek through our living room blinds, and there was Kevin, sitting on the outside window ledge, staring back at us with large, black, dilated pupils, his face almost pressed against the glass. We’ve never fed Kevin or let him inside. We put out a bowl of water for him daily.

It went like this until one momentous afternoon in early April, when Kevin sat on my lap. He jumped on as I was sitting on our porch bench, wearing a black dress with white swirls, and he proceeded to shed all over me. It was a big step in our human-cat relationship.

He didn’t sit on my lap again until a few weeks later, when I sat on the porch floor with my legs sticking out, wearing my neighborhood walking outfit (blue leggings and a gray T-shirt honoring the late great soul singer Sharon Jones). Kevin stretched himself across my lap, while I petted him for 20 minutes. I wanted to cry I was so happy.

During this pandemic, when so many of us feel isolated and uncertain, random new connections -- like Kevin strolling into our lives, on his terms -- feel more profound, and comforting.

But let me back up a moment.

Being affectionate with neighbors’ pets, and animals in general, isn’t new for me and Dave. Dave grew up with three dachshunds and two cats. I grew up with a white, scrappy, indoor-outdoor cat named Kitty whom we got after my mom -- who was allergic to animals -- died of cancer when my brother and I were kids.

Bella was put down last year after a long, belly-rub-filled life. Dave and I petted her that morning. Buddy moved away earlier this year with his owners, our friends. This June, I watched Tess, sick with cancer, be put down by a vet as my stepmom and dad cried, holding her.

That day in April that Kevin sat on my lap was soon followed by devastating news. He was mauled that night by two coyotes, and raced up a tree to escape. Kevin was whisked by his owners to the vet. Miraculously, he survived.

We didn’t see him for three weeks. I told myself, “If we never see Kevin again, that’s ok. I’m glad he’s alive.”

Then, while we chatted with his owners on a bright day in May, Kevin inched through their front door and onto their porch, saw me, and ran over to be petted. From that day on, he started visiting us again, and his affection was all-consuming.

As spring turned into summer, he dropped by every morning and afternoon, and I took breaks from work to cuddle him outside. We would open the door, and there he was meowing “Hello.” I started calling him “Lil Meow Meow.”

With Dave, Kevin would do what we found out is called “head bunting” — a sign of cat affection. Except instead of bumping his head lovingly against Dave’s head, he would jump onto Dave’s lap and bury his face in Dave’s beard, which is gray and white, like Kevin. With me, he would jump on my lap and rest his face against my chest, wrapping his paws around me. We always told his owners how much we cared for Kevin — knowing, of course, that he’s not our cat. Many times, Kevin wouldn’t leave our porch, so we walked him home at night.

Now, as the dregs of summer heat engulf our porch during the day, Dave and I have noticed a change, again, with Kevin. He comes by for lap cuddles, but not for as long, and he darts off to another neighbors’ place during the day to sleep under a car. We continue to put out a bowl of water for him.

Still working from home, I find myself going out onto the porch at different times expecting to see him, but he’s not there. When he does visit, Dave and I are so happy for his presence. In other words, he’s a cat, with the whims of a cat. He does what he wants, goes where he wants, and his affection is a joy and a privilege.