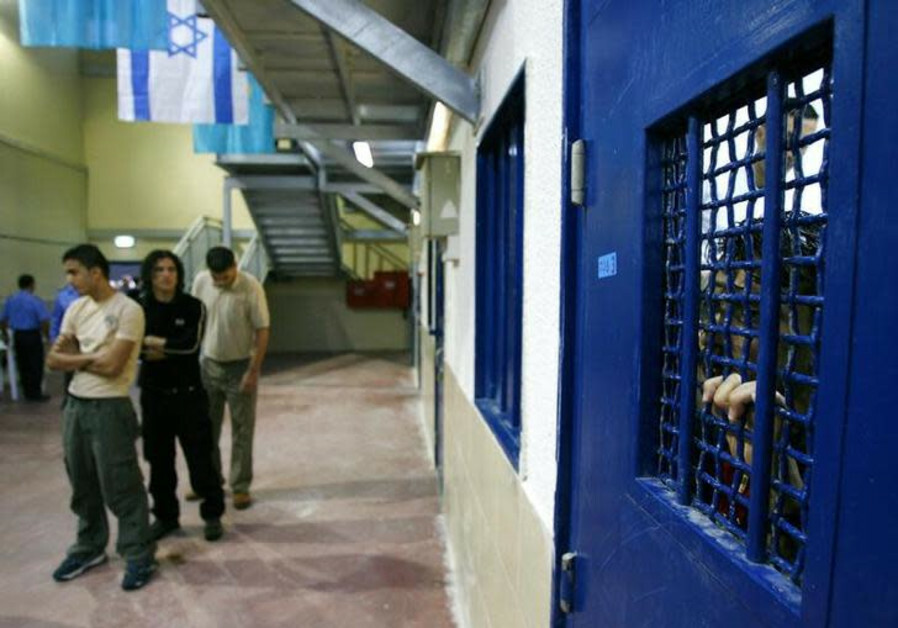 A number of Palestinian prisoners were conducting hunger strikes in Israeli prisons, with at least two prisoners in serious condition, as tensions rose in the prisons on Sunday, according to Palestinian reports.

The hunger striking prisoners included Zakaria Zubeidi, one of the prisoners who escaped from the Gilboa Prison and were recaptured. Israel Prison Services are monitoring Zubeidi's behavior.

Qawasmeh's health condition was serious as of Sunday morning, with family members telling Palestinian media that he was in severe pain and frequently losing consciousness as he marked 81 days of his hunger strike. Aaraj was also in serious condition as he marked 64 days of his strike, suffering from severe pain in his kidneys and general weakness.

Hamas leader Ismail Haniyeh called Qawasmeh on Saturday, telling him that the issue of Palestinian prisoners is still the priority of the Hamas movement and Palestinian factions, according to Palestinian reports.

Kaplan Medical Center announced on Monday it will not fire two Arab-Israeli nurses who posed for a photo with Qawasmeh. A video shared on social media earlier on Monday showed the nurses posing for the photo.

The nurses were summoned for a disciplinary inquiry by Kaplan management after the video emerged. They were made aware of the severity of the incident and have expressed remorse for their actions.

The Hamas movement announced on Saturday that it was closely following up on the hunger-striking prisoners and had contacted a number of parties, including Egyptian officials, about the issue.

"We have informed the brothers in Egypt that the continuation of the prisoners' strike and the intransigence of the occupation may lead the whole region to unimaginable consequences," said Hussam Badran, a member of Hamas's political bureau.

The International Committee of the Red Cross (ICRC) stated recently that it is "seriously concerned" with the deteriorating health of Fasfous and Qawasmeh, warning of "potentially irreversible consequences" of such a long hunger strike. The ICRC encouraged the relevant sides to find a solution to avoid a loss of life.

Prisoners in Israeli prisons also launched escalatory steps on Sunday in protest against measures implemented after the escape of six prisoners from Gilboa Prison, including returning meals and refusing to cooperate with orders by prison wardens. The prisoners warned that they would further escalate protest steps in the coming days.

In recent meetings between Hamas leaders and Egyptian officials, the Hamas officials pushed for progress in a prisoner swap agreement with Israel, stressing that it would not budge on its demands in such a deal, according to Arabic reports.

Hamas official Mohammad Nazzal told the Hezbollah-affiliated Al-Mayadeen news recently that Hamas intends to reach a deal that achieves the release of the largest number of Palestinian prisoners, including Marwan Barghouti and Ahmad Sa'adat and had provided Egyptian officials with a detailed road map based on the movement's demands.

The Palestinian Safa News Agency reported last week that the Hamas delegation to Egypt had warned that the situation could "explode" like it did in May during Operation Guardian of the Walls due to what it called "continuous Israeli violations and crimes" in Jerusalem and against prisoners, as well as the continuation of settlement building.

Administrative detention is a special status in Israel where a detainee gets to argue for their release in a judicial proceeding, but the standards of the proceeding do not offer the same protections as regular criminal trials.

Due to some evidence against administrative detainees being based on classified intelligence, their defense lawyers often complain that they cannot properly defend their clients since only the court gets to view the full evidentiary file.

Administrative detention was first enacted into law in Defense Regulations by the British Mandate in 1945 to combat Arab and Jewish riots and rebellions in the area. The regulations included curfews, censorship measures, restriction of movement measures and deportation measures.