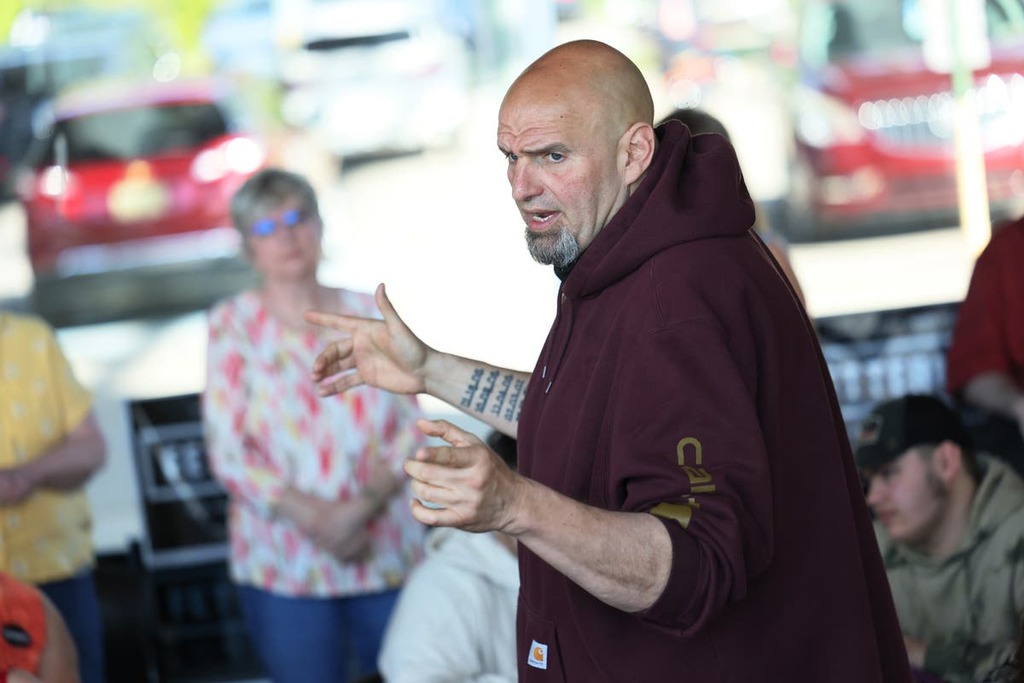 John Fetterman, lieutenant governor of Pennsylvania and Democratic Senate candidate, hospitalised with stroke
‘The good news is I’m feeling much better, and the doctors tell me I didn’t suffer any cognitive damage. I’m…

“The doctors have assured me that I’ll be able to get back on the trail,” he said.

Politico
One subscription that gives you access to news from hundreds of sites
10 races to watch Tuesday, led by Senate contests in Pennsylvania and North Carolina

Five states hold primaries Tuesday. The top race is in Pennsylvania, where the GOP Senate primary will be another test…

Australian voters have elected their government. Now the Labor Party has to make them believe they were right
Elections are a test - the ultimate test, really – of those who serve as parliamentarians and those who aspire…

The Conversation
Read news from The Economist, FT, Bloomberg and more, with one subscription
Learn More
Morrison's 'great electoral bungle' leaves the Liberals decimated and heading in the wrong direction

Newcastle Herald
As Albanese heads to the Quad, what are the security challenges facing Australia's new government?

InnovationAus
From analysis to good news, read the world’s best news in one place
Big conservative push in Hunter electorate gains some ground but fails to fire

WYOMISSING, Pa. — A roller-coaster Pennsylvania campaign season careened toward a breathless finish Saturday as candidates raced to firehouses, diners, public parks, and an indoor rally, making a final push in some of the country’s most critical races.

The scramble before Tuesday’s primary election was especially intense, and potentially decisive, in the Republican Senate race, where three candidates are running neck-and-neck over shifting terrain. In a hugely expensive and nationally watched race, celebrity surgeon Mehmet Oz is clinging to what public polling has suggested is the narrowest of leads, trying to fend off Army veteran and former hedge fund CEO David McCormick and Kathy Barnette, a hard-right contender running on a shoestring budget.

After a race that long focused on the free-spending Oz and McCormick, Barnette has upended the entire contest in the last week with a late surge.

The GOP governor’s race got a more mild jolt early Saturday when former President Donald Trump endorsed State Sen. Doug Mastriano. Mastriano, though, has looked like the likely winner for months, so the last-minute support is more likely to pad the successful endorsement record Trump likes to tout, rather than have any major impact.

Trump’s other pick in Pennsylvania, Oz, was fighting to hang on.

He and McCormick, whose campaigns and political allies have spent more than $50 million, much of it blanketing Pennsylvania with ads, are at risk of being overtaken by Barnette, who rallied in Bucks County with Mastriano.

“The real question for a lot of voters is ‘Should they roll the dice?’” Oz said in a morning interview. “No one knew anything really about her until last week. But is it worth throwing your vote behind someone that you know so little about?”

Barnette responded later by lumping in her conservative critics, including Fox News star Sean Hannity (who supports Oz), with the “swamp” of liberals and her top rivals in the GOP primary.

“Their problem with me is I didn’t ask for permission,” she said in Bucks County. “I just walked through the front door.”

Barnette accused Hannity of “sowing disinformation,” and the crowd booed his name.

“These jokers are going to go down,” she said. While some Republicans have worried that she hasn’t been deeply vetted, after rising late in the race, she later added: “I have been running for 13 months. But these people are acting like I just crawled out from under a rock.”

Most media, though, were physically barred from the event, despite the campaigns publicly advertising it and taking RSVPs.

McCormick, summing up Pennsylvania politics, said: “It was always going to be close.”

The Democratic Senate primary, less intense throughout its contest, was missing its front-runner as Lt. Gov. John Fetterman canceled events Friday and Saturday because of illness, according to his campaign. U.S. Rep. Conor Lamb, hoping to prove polls wrong, attended a dinner Saturday with the civil rights group the National Action Network, and State Rep. Malcolm Kenyatta, of Philadelphia, rallied with labor union members in a West Philadelphia park.

Attorney General Josh Shapiro is the only Democrat in the governor’s race, leaving one primary quiet.

Oz, widely known as “Dr. Oz,” began the day with a morning stop at a firehouse in Upper Darby. He spoke to about 30 listeners and, in one moment that seemed yanked from his TV show, took a seat among the crowd and pulled out a $20 bill to explain a point about monetary devaluation.

Several national media outlets were with Oz, tracking the primary in a race whose general election outcome could decide control of the Senate.

Asked why he couldn’t pull away, despite his personal fame, his campaign’s significant spending, and Trump’s backing, Oz said: “35 million reasons.”

It was a reference to the spending by McCormick and the super PACs supporting him.

Several who came to see him said they weren’t discouraged by the ads attacking Oz over past statements he’s made on issues like abortion, guns, and fracking.

“I do like his message, I think it’s a positive message,” said Bill Scott, 54, of Drexel Hill, who said he chose Oz after also considering Barnette.

Dave Schaffer, 45, also of Drexel Hill, said the attacks initially gave him pause, but he has come to believe Oz’s statements proclaiming his conservatism. “He’s not hiding anything,” Schaffer said.

The ads were one of the first things Maria O’Brien brought up in Wyomissing, near Reading, when McCormick stopped at her table at the Wyomissing Restaurant & Bakery.

“We want something uplifting, hopeful, powerful,” O’Brien, a onetime Democrat turned Republican, said in an interview after a lengthy conversation with McCormick.

O’Brien, 60, bemoaned the divisive campaign and said she was leaning toward Barnette, impressed by her performance at a recent debate. But she was still considering McCormick.

“It was nice to hear him and not the people who ran his ads,” O’Brien said. “He had a much more positive message in person.”

His closing message was threefold: Who shares your values and will fight for them? Who can win the general election in November? And who has the experience to immediately address the big issues?

“I think it’s much more important that I be talking about why I think I’m the best choice, as opposed to why they’re not the best choices,” he said in an interview.

In the Democratic race, Lamb met with 10 people at a reception on a top floor of the AKA hotel in University City, answering questions and making the pitch that he’s the best-suited candidate to win in the general election.

“What I can offer you as a Democratic nominee is someone who’s able to step out the day after the primary and ... put together the entire coalition of people that we need,” Lamb said.

”And that is a group of hard-core, passionate Democrats who want to turn out, and it is swing voters.”

State Sen. Sharif Street, vice chair of the party, said he hasn’t ruled out an upset, despite Lamb’s most recent poll numbers, particularly if Lamb does well in Philadelphia, where he has spent a lot of time campaigning.

“I don’t think it’s dispositive that it’s over,” Street said.

Lamb then mingled with members of the National Action Network at a dinner for the civil rights organization in East Falls.

Another underdog, Kenyatta, hoped his labor allies could help rally him despite an underfunded campaign.

He addressed about 50 people at a get-out-the-vote event in West Philadelphia hosted by SEIU 32BJ, an influential union that represents building workers and other trades and that endorsed him.

Kenyatta, who has consistently polled behind Fetterman and Lamb, urged Democrats to “outwork” their opponents as they set out to knock on doors on a rainy Saturday.

“There are folks today who don’t believe that in the year of our Lord, 2022, that women should be able to control what happens with their own bodies,” Kenyatta said. “Are we just gonna accept that, or are we gonna outwork them?”

“Outwork them!” the crowd shouted back.

John Fetterman, lieutenant governor of Pennsylvania and Democratic Senate candidate, hospitalised with stroke
‘The good news is I’m feeling much better, and the doctors tell me I didn’t suffer any cognitive damage. I’m…

“The doctors have assured me that I’ll be able to get back on the trail,” he said.

Politico
One subscription that gives you access to news from hundreds of sites
10 races to watch Tuesday, led by Senate contests in Pennsylvania and North Carolina

Five states hold primaries Tuesday. The top race is in Pennsylvania, where the GOP Senate primary will be another test…