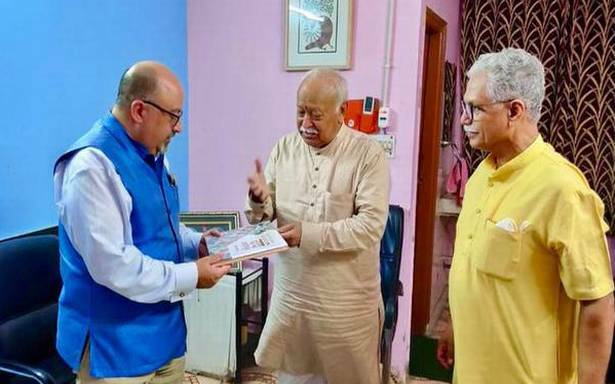 U.S. acting ambassador Atul Keshap met with RSS chief Mohan Bhagwat on Wednesday, in a meeting considered significant as it comes days ahead of Prime Minister Narendra Modi’s visit this month to America, where he is expected to hold his first bilateral meeting with President Joseph Biden and attend the Quad summit.

“Good discussion with Shri Mohan Bhagwat about how India’s tradition of diversity, democracy, inclusivity and pluralism can ensure the vitality and strength of a truly great nation,” Mr. Keshap tweeted.

Mr. Keshap was on a round of farewell calls, and had also met Congress leader Priyanka Gandhi Vadra on Tuesday. He is expected to return to the U.S. shortly, after completing just over two months as Charge D’Affaires.

“The U.S.-India relationship has never been better. Working together, our two great democracies will continue to advance human happiness around the world for years to come,” Mr. Keshap said in a statement announcing his departure.

The Deputy Chief of Mission will officiate until Mr. Biden’s Ambassadorial nominee, Los Angeles Mayor Eric Garcetti, receives confirmation in the U.S. Senate. According to reports, the process is likely to take some months as the Senate is in recess, and has only cleared one Ambassador posting so far, with about 65 ambassadorial and national security nominations still pending.

U.S. Embassy officials declined to comment on whether the ambassador’s words to Mr. Bhagwat were meant to carry any special import. During a visit to Delhi last month, U.S. Secretary of State Antony Blinken had also mentioned the importance of “democracy, pluralism, human rights and fundamental freedoms” that he had discussed with External Affairs Minister S. Jaishankar, who had then replied that the discussion on these values “applies as much to the U.S. democracy as it does to Indian democracy.”