Outflanked on renewables by the NSW Coalition, time is right for Fitzgibbon to go 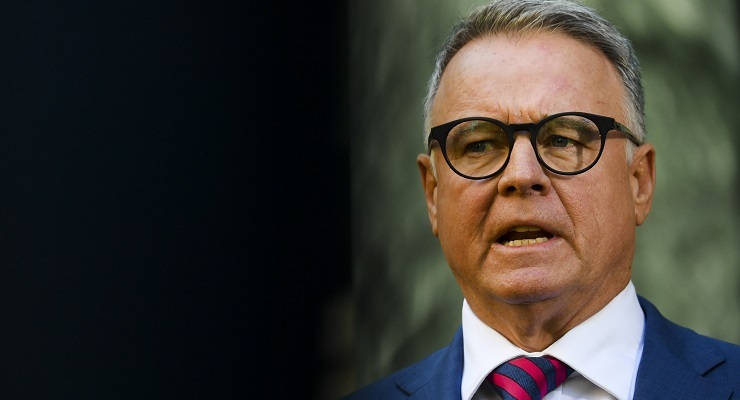 Labor’s Joel Fitzgibbon leaves Parliament after a quarter of a century without, alas, much to show for it.

Gifted a safe seat by his father, for whom he’d worked as an electorate officer — though he did spend his early 20s in the real world rather than in politics — Fitzgibbon was elected to Cessnock Council in 1987 at 25 and took over as member for Hunter in 1996.

The Hunter was a bit different in the 1980s. Coal job numbers were still in the tens of thousands. Wine tourism was barely a thing — many Hunter wineries were still family owned and hadn’t yet been snapped up by corporations.

Hunter coal kept the lights on in New South Wales. Fitzgibbon quickly entered shadow ministerial ranks in the mining and energy portfolio but had to wait 11 years to reach the ministerial wing, carried in by Kevin Rudd’s 2007 win which saw him become defence minister.

In that role he was noteworthy for three things: being an early sceptic of the F-35 scheme; being the subject of an alleged intelligence operation in relation to his friendship with Chinese-Australian businesswoman Helen Liu; being the only Rudd minister to lose his spot when he resigned in relation to his brother Mark — the head of health insurer NIB — using Fitzgibbon’s office in the ministerial wing for lobbying.

By contemporary standards, Fitzgibbon’s offence looks positively innocuous, but Rudd had better standards of conduct than governments before or after him. It didn’t cruel their relationship — Fitzgibbon became one of Rudd’s chief lieutenants in the former PM’s incessant campaign of destabilisation against the Gillard-Swan government that opened the way to the Coalition’s rapid return to power in 2013.

After a near-death experience at the hands of One Nation in 2019, Fitzgibbon reemerged as a tribune of coal mining companies — these days mostly multinationals — urging Labor against climate action.

That created the unusual sight of Fitzgibbon being left behind not so much by inner-city greenies on fossil fuels, but by the NSW Coalition government, in which Environment Minister Matt Kean and the NSW Nationals ramped up regional investment in renewables, with the Hunter Valley targeted as a renewable energy zone rather than as a life support unit for the dying coal industry.

It thus seems the right time for Fitzgibbon to leave politics, possibly to explore other opportunities on offer in the fossil fuel sector.