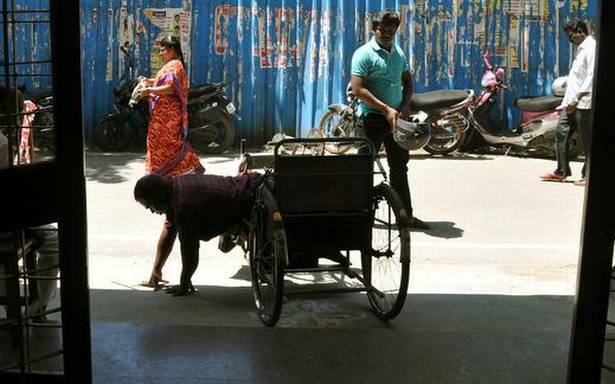 The Director for the Welfare of the Differently Abled has informed the Madras High Court that of the 49,550 public buildings in Tamil Nadu, only 26,769 had ramps and hand-rails at the main entrance. Further, only 21,063 had accessible vehicle parking space and just 13,035 buildings had been provided with accessible staircase.

Chief Justice Sanjib Banerjee and Justice P.D. Audikesavalu were informed that data collected from government departments as well as the State-run universities revealed that 24,060 public buildings alone had drinking water facilities accessible to the disabled and only 22,339 had the disabled-friendly toilets. Though 40,476 buildings had doors that could be accessed freely by the disabled, only 1,209 had elevators with Braille raised numbers on the control panel. A small number of 1,470 buildings had tactile floors and 2,362 buildings had been provided with signage, read a status report filed before the first Division Bench.

The report was filed in response to a public interest litigation petition filed by visually challenged lawyer M. Karpagam of Chennai through her counsel R. Prabhakaran. It stated that the Police Department had claimed that all its 839 buildings had ramps, hand-rails, parking space, accessible staircase and drinking water facilities.

Director Johny Tom Varghese said some departments and institutions like Anna University were to provide the data and steps were afoot to collect responses from all public offices. At present, the Public Works Department (PWD) maintains the maximum number of 45,782 government buildings, the court was informed. Of those PWD buildings, only 23,856 had ramps and hand-rails; 18,024 had accessible parking space; 10,376 had accessible staircase; 36,031 had accessible doors; 21,064 had drinking water facilities; 333 had Braille raised number on elevator control panels; 20,130 had the disabled-friendly toilets; 934 had tactile floors; and 1,522 had signage.

The Director said he had issued a notice suo motu to the PWD on August 19 and received a reply on August 31 highlighting the practical difficulties faced by it in retrofitting buildings constructed before 2017. The PWD had said provision of accessible ramps and toilets with sliding doors would disrupt the stability of the old buildings. “In some buildings, the 1:12 ratio for construction of ramps cannot be satisfied, leading to the construction of steep and narrow ramps, which are difficult for the disabled to use,” the report read. It, however, stated that 85.3% buildings constructed after 2017 had accessible toilets, 89.5% had ramps and 88% had accessible doors.

In a nutshell, Mr. Varghese said, 54% of the public buildings could be accessed by the disabled and about 45% of the buildings constructed before 2017 had been retrofitted with the disabled-friendly toilets. In buildings where retrofitting was not possible, officials had been requested to attend to the needs of the disabled at the entry point. It was also brought to the notice of the court that the Rights of Persons with Disabilities Act, 2016, came into force only on April 19, 2017. The law requires all old public buildings to be made the disabled-friendly within five years of its coming into force, and accordingly, the deadline for retrofitting the buildings was June 15, 2022.