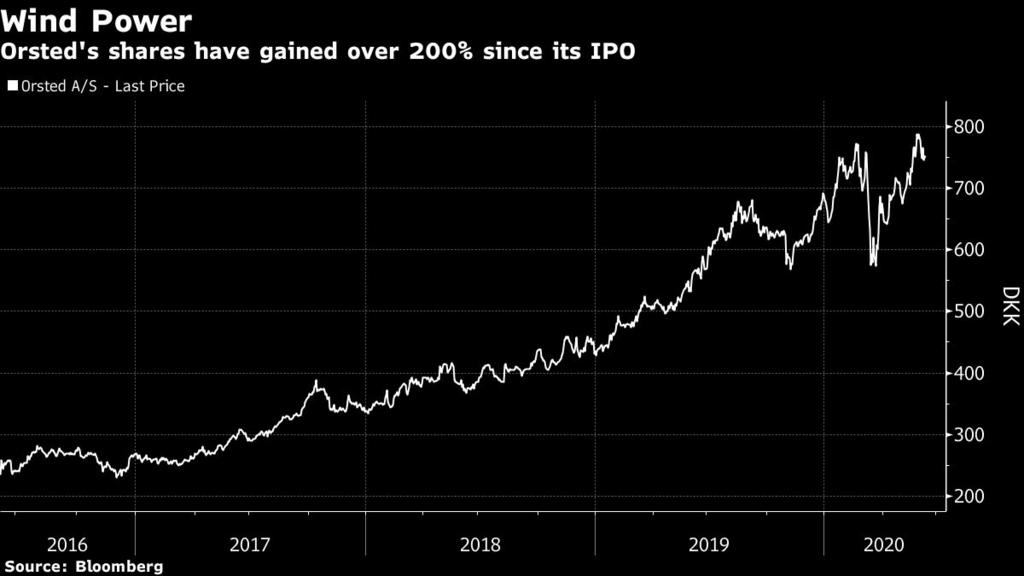 The chief executive officer of Orsted A/S will step down by the end January, after transforming the former fossil-fuel company into the world’s biggest developer of offshore wind farms.

Henrik Poulsen, who became Orsted’s chief in 2012, oversaw a name change, strategy overhaul and an initial public offering that’s seen shares in the company surge by 220% since 2016. That’s just short of Amazon.com Inc. and Apple Inc.’s growth over the same period.

Poulsen will join the Danish company’s board and continue in his job until Jan. 31, 2021 at the latest, while Orsted seeks his replacement. The company’s board will evaluate internal and external candidates to be the next boss.

“Together, we’ve transformed a Danish utility predominantly based on fossil fuels into a global leader in green energy,” Poulsen said in a statement.

When Poulsen took over DONG Energy in 2012, the company was in disarray, losing money on its gas business and coming off an investigation into the behavior of its previous chief executive.

DONG Energy re-branded as Orsted in 2017, named after the Danish scientist Hans Christian Orsted who discovered electromagnetism in the 19th century.

Orsted’s specialty has been building and operating wind farms at sea. The green power plants have scaled up in the last decade from an expensive niche to one of the cheapest and most efficient forms of renewable power in the world.

Now countries across Europe and Asia as well as a number of American states are looking to offshore wind power to decarbonize electricity production.

At the end of the first quarter, Orsted’s projects accounted for about 22% of all the offshore wind farms in the world, according to a Bloomberg analysis of company filings and data from BloombergNEF.

“Orsted has been pivotal in scaling-up and taking the sector from demo onshore wind turbines in a puddle to standalone sector,” said Tom Harries, a wind analyst at BNEF.