HARTFORD, Conn. — The University of Hartford has quietly sold one of the most extraordinary collections of American political memorabilia ever assembled — a collection one of the city’s insurance titans spent a lifetime assembling and later donated to the school in the hope that it would be preserved and displayed to the public in perpetuity.

The school sold what was known as the J. Doyle Dewitt Americana & Political Collection to Heritage Auctions. Over March 19 and 20, the auctioneer collected $1.8 million for parts of it, mostly from private collectors, during the first of what is expected to be at least two auctions in Dallas.

Neither the school nor Heritage would disclose what the auction house paid for the 70,000 piece collection that included items such as the cuff links George Washington wore at his inaugural. Intact, it was second only to that of the Smithsonian Institution in historical significance. The authoritative Antiques and the Arts Weekly reported that sales at the March auction were $1 million above expectations.

The auction appears to dash whatever hope remained among collectors and academics that Dewitt’s collection could remain in Connecticut, complete and as a center of political scholarship and tourism.

Dewitt, a former chairman and CEO of The Travelers Insurance Cos. and director of a half dozen of the county’s leading banks, built his 70,000-piece collection by spending decades scouring backwater America for artifacts of the national political culture.

He is said by those who knew him to have become fascinated by Americana and an inveterate collector early in life. He was a World War I vet when The Travelers hired him in Des Moines in 1925 as a claims investigator. He was in Hartford two years later. By 1943, he ran the Travelers’ claims operation. He was a vice president in 1950, president in 1952 and chairman and CEO in 1964.

Dewitt competed for acquisitions against against the Smithsonian, then building the national collection, and friends said that as he rose through the ranks at The Travelers, he enlisted his far-flung sales and claims teams in the hunt.

His collection included textiles, prints, pottery, glassware, mugs, medals, buttons, banners, ribbons, posters and cartoons. Dewitt found a pair of trousers worn by one of the sailors who rowed Gen. George Washington across the East River when the British chased the colonials off Long Island during the Revolutionary War. There was a whale oil torch carried by the Wide Awakes, a paramilitary, political marching club that began in Hartford, then a leading U.S. city, before spreading across America and helping to put Abraham Lincoln in the White House.

The Dallas auction may have set at least one record, according to Curtis Lindner, Heritage Auctions director of Americana. A buyer paid $118,750 for a silk ribbon bearing Matthew Brady’s photographic images of Stephen A. Douglas and Herschel Vespasian Johnson, the Democratic candidates for president and vice president in the 1860 election.

During presidential election years, Dewitt opened his collection to the public in a building The Travelers owned on Prospect Street, where it was visited by thousands of children on school field trips. When it wasn’t on display, Dewitt warehoused part of the collection and kept the rest at his home.

He was a founding member of the University of Hartford Board of Regents, and eventually donated the collection to the school over a dozen years, beginning in 1959. Friends and fellow collectors said he wanted his collection to remain intact and available to the public and scholars.

The University of Hartford’s decision to auction-off the collection, effectively breaking it up and putting it in the hands of private collectors, has disappointed some history buffs and others who claim the school is not honoring at least the spirit of Dewitt’s gift and depriving the region of an important asset. Academics fear it will be lost to scholarship.

“I was born and raised in Hartford, and first viewed the collection when I was in first grade,” said Joe Anderson, who has since relocated to Singapore and read about the sale from the far side of the world. “The exhibition catalog’s coverage of the U.S. presidential campaigns sparked a life-long interest in history.”

“The collection was donated to the University of Hartford not as a financial asset, but on the understanding that U of H would provide institutional stewardship for this important community asset,” he said. “The sale is shameful, and a total violation of their stewardship responsibilities.”

Harry R. Rubenstein, chairman of the Smithsonian’s division of political history at the National Museum of American History, once called Dewitt’s collection “one of the major national political history collections in the country, in both its scope and quality of material.”

Of particular note, Rubenstein said, were the collections 19th century holdings, which make it “a valued resource for scholars and the public interested in American political life and culture.”

The school issued a statement acknowledging the sale to Heritage. Although Heritage said buyers at auction were “mostly private collectors,” the school said the sale would take the collection out of the warehouse where it had been stored for more than a decade and return it to the public.

“In March of 2021, after completing a market assessment and with Board review and approval, the University of Hartford sold the Dewitt Collection to Heritage Auctions,” the school said. “Heritage is the third largest auction house in the world and is considered a leading expert in political memorabilia. The Collection had been in storage for more than 15 years and we are very pleased that these historic artifacts are being returned to the public domain to be cared for, shared and celebrated.”

For years, the school had been at a loss over what to do with the collection.

In the early 1980s, then university President Stephen J. Trachtenberg, complained to then U.S. Sen. Lowell P. Weicker Jr. that the school had no place in which to display the collection to schoolchildren and researchers. A former aide said Weicker was so impressed by what Dewitt had accumulated that he had it classified as a “natural resource” and pushed a $5 million appropriation through Congress to help pay for a campus building in which it could be displayed.

The school put the collection on display in 1989; among the regular visitors was Heritage’s Linder, who ran the March auction. But in 2003, the university packed it up and put it in storage in order to make the display space temporarily available for a traveling National Archives exhibition of historic American documents.

It was never unpacked. Dewitt’s collection had been locked in a warehouse north of Hartford ever since and the school has converted the former display space for other uses.

The university has said for years that it lacks the resources to care for and display tens of thousands of delicate artifacts. Since Dewitt’s donation came with no restriction, the school said the collection is an asset and it had a fiduciary responsibility to manage assets in the best interest of the institution.

After placing it in storage, the school tried but failed to sell it to a local institution that would keep it intact and on display. Some would not or could not pay. Others didn’t want the whole collection.

When it became clear five years ago that the school was serious about selling the collection, there was local opposition. Among those challenging the school was Hartford attorney and collector Hubert J. Santos, who had an extensive collection of his own.

Santos argued, unsuccessfully, that the school was blocked from selling by restrictions created when the federal government helped finance a campus building to display it.

Santos and others next turned to then-state Attorney General George Jepsen who reviewed numerous sets of documents related to the donation of the collection and concluded there were no conditions preventing a sale.

Opponents of the sale thought they had the answer in 2016 in Greenwich businessman Mark R. Shenkman, who had given generously to UConn and whose personal Americana collection includes original copies of the Declaration of Independence.

Shenkman offered to pay a price determined by the school’s appraiser, keep the collection intact at least through his lifetime and make it available to researchers and the public, perhaps in a new building at UConn, according to two people involved in the discussions.

When the school did not act over several months on Shenkman’s offer, he acted on an opportunity to invest in another collection, the two people said.

The University of Hartford has declined to discuss the matter.

Heritage later won the collection in a competition with other auction houses.

“I went up with one of my co-workers for a week and we evaluated it,” Lindner said. “And we ended up acquiring it from the institution. And then we went back up and it was loaded onto a big semi. We actually almost couldn’t get it all in there. But we just made it. We had like a foot left.” 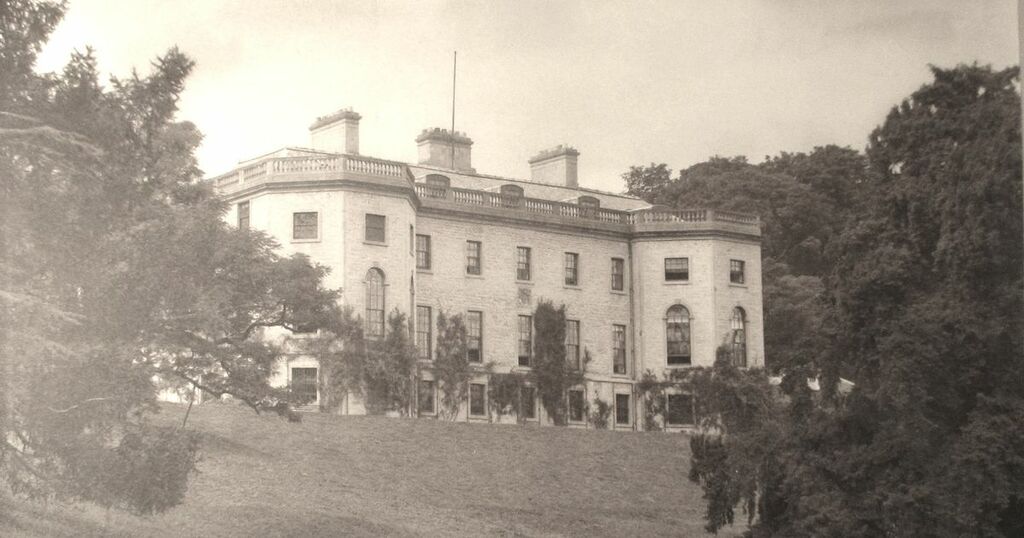 'Lost' photos of historic Scots mansion are highlight of book launch in village
The 'lost' pictures had been found during author's research into Scots political figure R B Cunnninghame Graham.

Daily Record
One subscription that gives you access to news from hundreds of sites
A Holocaust survivor’s collection of over 1,000 miniature books speaks volumes of her resilience

What impulse unites a collector of ceramic cats with someone who gathers broken records or sweet wrappers?