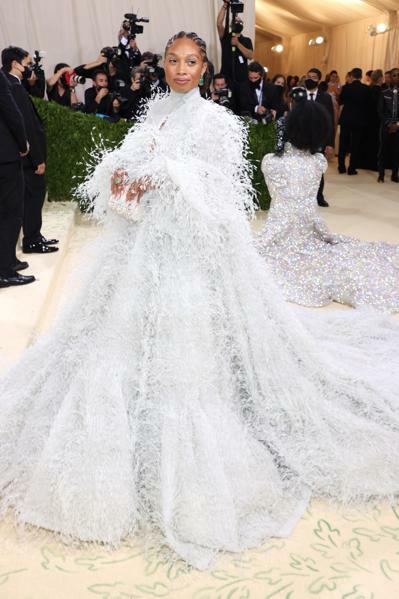 Allyson Felix is no stranger to running a red carpet, but last night, she took on a new kind of runway like never before. After a year off due to Covid-19, the long-awaited Met Gala was back in action where the Olympian made her debut as a first-time attendee.

On early Monday evening while getting ready at the 1 Hotel Central Park, Felix was calm and composed, which was no surprise for someone who’s handled some of the largest stages in the world. It was her first time being back in New York City since the 2021 Tokyo Olympic Games where she took home her 11th Olympic medal and was named the most decorated track-and-field Olympian in its history.

For this year’s event, Felix partnered up with the iconic Italian fashion house Fendi to create a look worthy of a gold medal. Working closely with Kim Jones, the brand’s Artistic Director, and her stylist Jason Bolden, the trio landed on a look from the Fall/Winter 2021 collection - a white gown adorned with 240,000 ostrich feathers and crystal beads. To complement the look, her hair was done in cornrows and tied in a low bun, accentuating the embellished neckline of the gown and exposing a pair of shimmering emerald earrings by Mateo. Her eyes were highlighted by a bold white eyeliner that added the perfect touch to her angelic look, “I feel like I've been transformed. It's something of dreams,” said Felix.

This year’s gala theme was was "In America: A Lexicon of Fashion,” which felt more than fitting for an attendee that has so historically represented America as a champion around the globe, “It’s about celebrating the history and heritage. Being an American athlete and representing the country on multiple occasions, I feel that sense of pride every time that I get to wear the red, white, and blue on the track. So a night that celebrates that in fashion, that I can also relate to, is an honor,” said Felix.

Further on theme, Felix attended the evening alongside fellow gold medal athlete Simone Biles, who also made her Met Gala debut. The history-making duo are both Athleta brand partners and were hosted by its parent company, Gap Inc. They were also joined by Gap Inc.’s CEO Sonia Syngal. In celebration of both Biles’s and Felix’s passion for empowering women and girls, Athleta has donated $50,000 to The Power of She Fund to support individuals and communities of women and girls to reach their limitless potential.

This year’s Olympic Games were Felix’s last, rounding out a record-breaking career that’s included seven gold, three silver, and one bronze medal. At 35-years-old, she’s broken barriers for female athletes around the world as the oldest woman to ever win a gold medal at this year’s games and as a fierce advocate for maternal rights in the sports industry. But her journey to the Olympic stage wasn’t easy. In 2018, Felix gave birth two months early to her daughter Camryn due to pre-eclampsia, a blood pressure condition that arises during pregnancy that can be fatal if the mother goes to full term. As a result, Felix underwent an emergency C-section that caused her child to spend almost a month in the NICU. The athlete’s pregnancy was a turning point in her career, not just as a mother, but as an advocate for women’s rights in the athletic industry. During her pregnancy, Felix was in the process of undergoing contract renegotiations with her then sponsor, Nike. According to Felix, Nike had planned to cut the terms of her endorsement by as much as 70% during her maternity leave and encouraged her to get back to training immediately. In response, Felix left the brand and penned an op-ed for The New York Times where she called out the athletic industry for its treatment of female athletes and lack of support for mothers. In an industry-altering moment, Nike, as well as other brands in the industry, established new maternity policies that protected pregnant athletes on contract, forever changing the future and potential of women in sports.

Today, Felix is on the heels of a new chapter in her career and adding a new title to her resume: designer. After leaving her contract with Nike, the runner launched her own brand of shoes called Saysh. The brand launched with two products; a lifestyle sneaker called the Saysh One, and the Saysh Spike One, a first-of-its-kind racing spike designed from the sole up by a winner herself. Felix won an Olympic medal wearing the Saysh Spike One, a historic moment as the first time an athlete ran in their own brand, “To step on the track in a shoe I made, I felt like I was representing so much more than just myself. All those women who have supported me who have just encouraged me and poured out with their own stories that have been similar to mine - I just felt like I was representing for all of them,” said Felix when reflecting on this year’s games. "It showed a lot of people that you don't always have to go the traditional route. It’s always scary and there are risks involved, but sometimes you have to bet on yourself.”

Co-founded by her brother and business partner Wes Felix, Saysh aims to be a platform for women and a place to share their truth. “Saysh” comes from the French word “Seiche,” which translates to move back and forth. The Saysh One was actually inspired by a wrap dress, which is also reminiscent of Allyson’s place of work, similar to the lines that denote a running track. The design appropriately bridges the worlds of the professional and the casual - a sneaker to accompany women whenever and wherever. “I’ve always admired fashion. I've always loved to dress up and just feel good in different things. So when it came to creating a sneaker, the silhouette was really important to me,” said the designer about her hero product. “There’s a lot of women’ shoes that are be comfortable but might not look great. So to bring something for women specifically - a beautiful silhouette was something I didn't want to sacrifice.”

As a mother and designer, Felix is just getting started. When looking towards the future, she’s humbled at the change she’s already made but is eager to do more for women in sports, “One thing that's really on my heart coming off the Olympics is I've been thinking a lot about childcare and mom athletes. Especially if you’re competing and overseas, we need more practical things. It’s the small things, like where can you breastfeed? Where can you pump? There’s so much that hasn’t been addressed. I’m looking forward to bringing more practical change to the industry.”

The Saysh One is now available for pre-order at Saysh.com