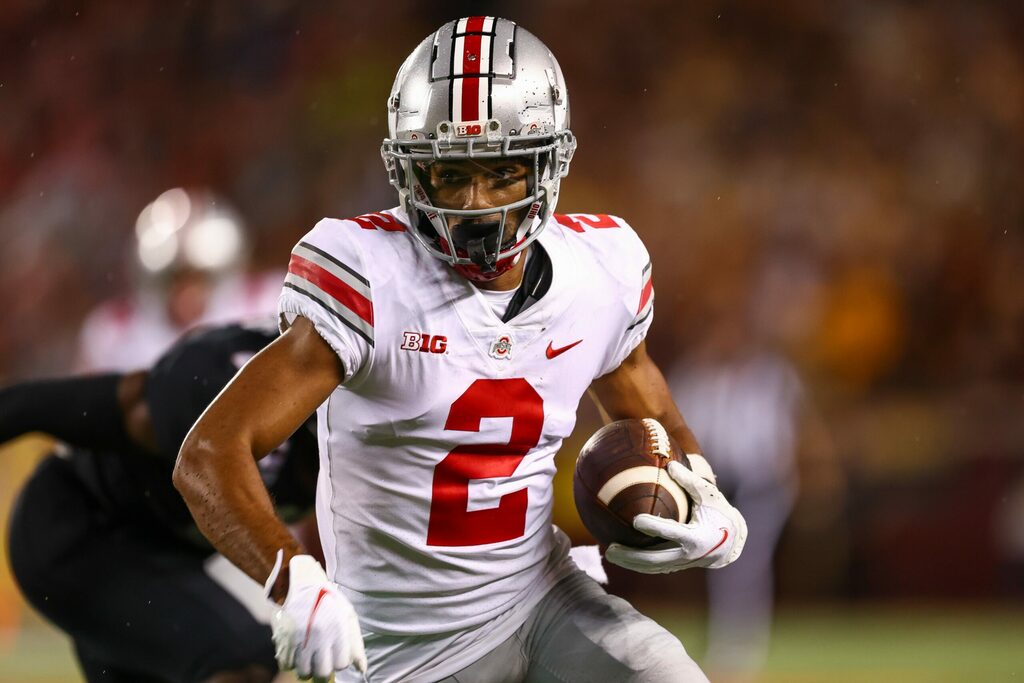 The Ohio State football team gave us a clunker of a performance this past Saturday against Oregon. Even though the Ducks were never blowing the Buckeyes out, OSU never really seemed to get its footing to pose much of a threat. It was disappointing, to say the least.

However, all is not lost Buckeye fans. Ohio State can still accomplish all of its goals for the season, although the margin for error is much smaller now. And to say something has to change with the defensive game plan is an understatement.

The Buckeyes welcome Tulsa to town this weekend. Not a marquee matchup by any means, but maybe just what the doctor ordered to work out some kinks and get Ohio State back on track.

NEXT … Records and broadcast information

Next … The game plan

The game plan to get back in the win column for this Buckeye team begins on the defensive side of the ball. We’ve been making excuses for Kerry Coombs since he was hired as the defensive coordinator in 2020.

The woes were evident last season, but it was a COVID-19 shortened season and a strange year all around. It looked like things were somewhat fixed with a thorough dismantling of Clemson in the Sugar Bowl, only to get embarrassed by Alabama in the national title game.

In Week 1 against Minnesota, we could excuse the play because the Buckeyes were in a hostile Big Ten environment, and Mohamed Ibrahim is one of the nation’s most talented backs running behind a huge and experienced offensive line.

No more excuses. And Coombs said as much after the debacle against Oregon on Saturday, taking full responsibility. Something has to change. There is way too much talent on that defense to constantly be out of position and giving up big plays.

The defensive line, which has long been seen as the strength of the Buckeye defense has to stop the run. If a team can run for six or seven yards a carry, as the Ducks did on Saturday, an offense can do anything it wants. No pressure in the backfield and the secondary is hung out to dry.

Offensively, C.J. Stroud has to settle. There have been too many overthrown passes and missed receivers. If Stroud wants to be the guy at OSU, he has to to play with a little more composure. One has to wonder as well, the way Stroud keeps rubbing his shoulder if he isn’t playing with some pain. Either way, despite the huge numbers, if he can’t get some things straightened out with the overthrows, the whispers are going to get louder for one of the next guys to get a look.

Next … The key players for Ohio State

Thayer Munford – Offensive Tackle: It starts in the trenches. Munford and the entire offensive line need to come out and show why they were considered one of the best units in the country when they play Tulsa on Saturday. Munford is the leader and captain and needs to rally the troops. The running game needs holes that will then open the passing game for Stroud.

Cody Simon – Linebacker: It’s been a while since Ohio State has had outstanding linebacker play. Simon is starting to show signs of becoming an impact player and it might be time for him to be on the field the majority of the game. Inexplicably, Kerry Coombs had Simon on the sidelines during some key plays against Oregon. If the Buckeye defense can’t keep Tulsa in check, it’s going to spell bad news for this team going forward.

Cody Simon closes the half for the Buckeyes with a sack! 🙌 pic.twitter.com/DZojstnux1

Next … How it’ll all go down

It can’t be a good feeling coming off a loss at home. As much as the fans feel it, I believe the players carry the brunt of the embarrassment. Unfortunately for the Tulsa football team, it happens to be in the line of fire.

The Golden Hurricanes have lost both games this season, but they haven’t been blown out. While Tulsa will not be confused with a Power Five opponent, the Buckeyes will need to regroup and focus on doing the little things well.

Ohio State rebounds against Tulsa in a big way. And it needs to look good doing so. Style points matter from here on out if the Buckeyes want to reach their goals. OSU rolls to get a bad taste out of its mouth.

All Betting Lines are courtesy of Tipico Sportsbook.