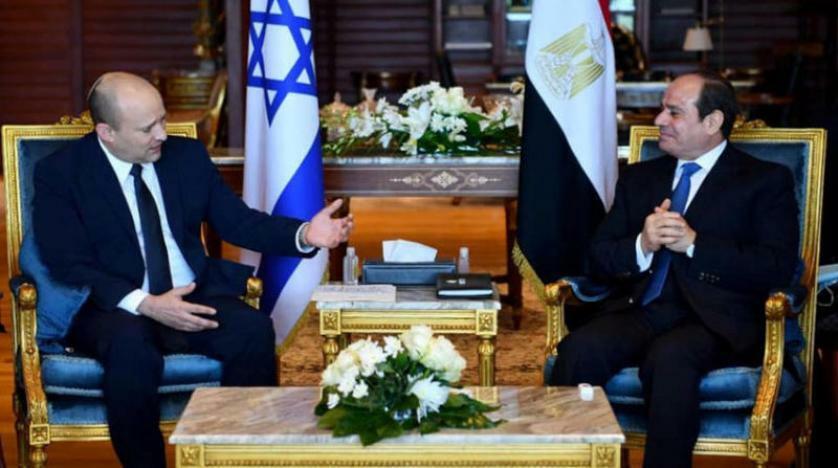 Israeli officials in the ruling coalition have issued statements that dispelled hopes of breaking the deadlock in Israeli-Palestinian relations, dismissing the outcomes of the meeting between Egyptian President Abdel Fattah al-Sisi and Israeli Prime Minister Naftali Bennett in Sharm El-Sheikh on Monday.

Interior Minister Ayelet Shaked, Bennett’s colleague in the Yamina party, made statements that contradicted with the outcome of the meeting, saying the PM had no intention of meeting with Palestinian Authority President Mahmoud Abbas, neither now nor in the future.

During a conference organized by Reichmen University (the Interdisciplinary Center of Herzliya), on the occasion of the 28th anniversary of the signing of the Oslo Accords, Shaked accused Abbas of “transferring funds to terrorists, and therefore, he is not a partner in any peace process.”

When asked whether she supported maintaining the path of the previous government headed by Benjamin Netanyahu, by strengthening Hamas and weakening the Palestinian Authority, Shaked replied: “No, I am not in favor of negotiations with Hamas. I think that Hamas was not deterred in the last war, and it is necessary to have another confrontation to deter it.”

She stressed that the confrontation “will be at the appropriate time chosen by Israel.”

Other Israeli officials, including those close to Bennett, stated that they would not agree to “the release of Palestinian prisoners convicted of carrying out operations in which Israelis were killed.”

These statements came in response to Bennett’s meeting with Sisi that the Israeli premier described as “very important and very good.” Sources close to the PM deemed the meeting a “positive turning point in Israeli-Palestinian relations.”

The negative statements are an extension of objections that were expressed over the vision presented on Sunday by Foreign Minister and Alternate Prime Minister, Yair Lapid with the aim to ease the Palestinian-Israeli conflict, and take practical and field measures to strengthen the Palestinian Authority in the occupied West Bank, in exchange for “maintaining security and calm.”