Odd bowers appear out of the blue

By Tim the Yowie Man 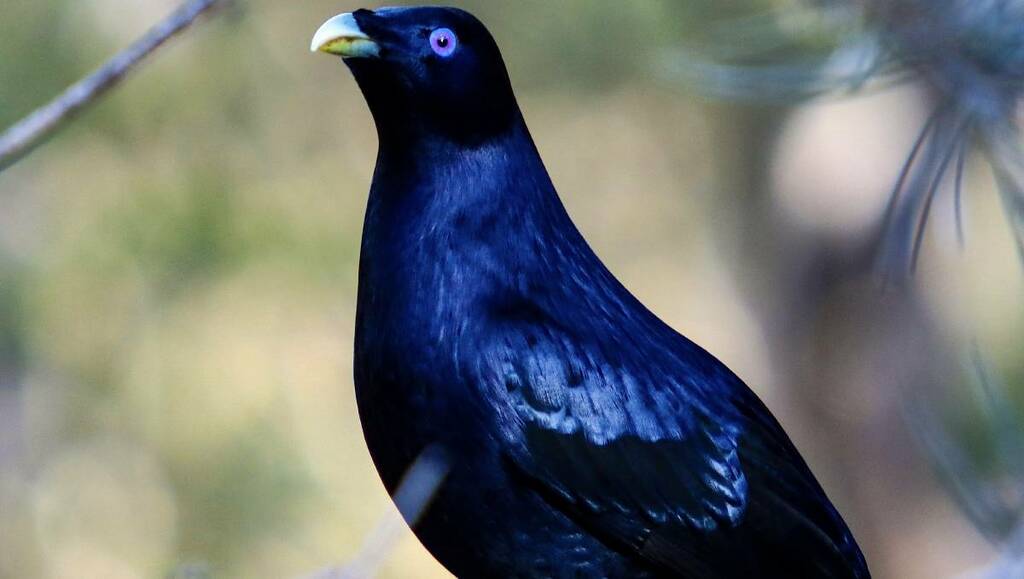 This column's recent exposé on the double bower Sue-Ellen Hodge found in her Calwell garden (Rare Sighting, August 14) flushed out a handful of other readers who have spotted similar avian oddities.

While Chris Lucas of Macgregor and John Smithers of Kaleen reported seeing satin bowerbird ''duplexes'', the most impressive photographic evidence was submitted by Nell Hunter, this column's northern NSW correspondent.

"This double bower is located in our large garden near Dorrigo where we have recorded about 86 varieties of birds," reveals Nell. What a ripper.

Dr James Nicholls, currently of the Australian National Insect Collection, CSIRO, and who studied satin bowerbirds for his PhD, confirms the duplex bowers are quite rare.

In fact, in his many years of research into the much-loved birds, Nicholls observed atypical bowers at only a handful of locations including "one at Tidbinbilla, one near Batemans Bay, and a couple in the Bunya Mountains in south-east Queensland". The Bunya bower was a bit different to the standard doubles in that it featured "five walls at all sorts of orientations to each other".

Why some male bowerbirds make these atypical bowers remains a mystery to ornithologists, however Nicholls confirms that contrary to some claims "they aren't indicative of a so-called 'two-timing' male".

"After all, the males build and decorate their bowers to attract as many females as possible, they take no part in the rearing of the chicks and a successful bower-holding male can mate with multiple females every season, meaning any male bowerbird could be considered 'two-timing' by anthropomorphic standards," he explains.

One observation that Nicholls did make with atypical bowers is that "the sticks in these tend to be thicker and longer, and the walls slightly shorter and more triangular in shape" leading him to speculate that "these bowers are the exploits of young and enthusiastic, but somewhat inexperienced male bowerbirds who don't quite have the right building plan in their heads".

By the way, according to Nicholls ''young'' and ''inexperienced'' in the context of satin bowerbird males who make bowers "means a male that has got his blue plumage (so is at least seven years old) but still is not as old and skilled as other males in the population".

Rolling in the aisles

Despite the last screening taking place more than 50 years ago, several readers have fond memories of watching films at Kinlyside Hall, now home to Hops & Vine cellar door in Hall Village (If this hall's walls could talk, August 28 ).

Among these, Kingsley Southwell of Wallaroo can shed more light on the novel way the hall was heated by fires in 32-gallon drums which the projectionist, Colin Southwell, (yes, a relation), would light earlier in the day.

"I remember helping to carry the drums inside before the show," reports Kingsley. "They had two holes near the top that we could put a crowbar through to carry it.

"Once inside, we'd sit them on bricks and inside a cut-off 44-gallon drum that would catch any embers that fell through the holes we'd punched in the drums to help the fire to burn," he explains.

Kingsley reports "it all worked very well I don't remember there being any dramas". Mmm, not sure it would be in the job description of today's cinema ushers.

Still on Canberra's first flicks, Laurie O'Mara, now of Ainslie but who grew up in Hall, confirms that it was local lad Lee Brown who had a reputation for rolling Jaffas down the aisle of the historic hall. Well, I'm not sure how far they rolled for as Shaun O'Connor of Hops & Vine discovered when recently undertaking renovations, "some of the piers holding the building up had sunk over time, rendering the floor quite uneven, with a big dip".

Laurie's clearest memory of growing up in Hall in the 1950s was attending the village school "which consisted of one room with classes from kinder to 6th grade, about 20 students in total". According to Laurie (and confirmed by your columnist with several of his classmates), the school's only teacher, Dick O'Sullivan, "would partake in a few drinks every lunchtime and would fall asleep till around 3pm when we all went home".

With home schooling in place across our region, I suspect there might be a few of the current crop of Canberra kids experiencing their own ''teachers'' nodding off mid-afternoon. Surely I'm not the only one who needs a nap after a morning of trying to explain algebra to a 14-year-old?

David Wardle can rest easy (Buckled bridge, August 7). This column has been reliably informed by an engineer that the apparent bulge he photographed in the Jim Butters Bridge that spans the Molonglo River is merely "an optical illusion created by localised widening of the bridge at that point to accommodate a seat". Phew!

Has anyone else noticed an optical illusion on their daily walks during lockdown?

Ron Jacobs of Calwell was shellshocked when, pre-lockdown, he spotted this giant stone tortoise near the Mount Hope Road in the Victorian High Country. And no, Ron didn't also spot a hare, or rabbit, for that matter.

This column continues to receive a torrent of reports from readers who claim to have successfully dowsed water using coat hangers plucked from wardrobes or other pieces of metal as dowsing rods.

Much of the correspondence in support of dowsing, which is dismissed by mainstream scientists, is consistent with an email from John Webber of Kambah who reports, "I've used it all my life, and never had a failure once. I don't care what the sceptics say, I know it works and that's all that matters."

Meanwhile, Tony Healy of Florey reveals about 25 years ago while working for the ACT Survey Office, he "met the foreman of a team of workers looking for a (temporarily) lost water main near Isaacs".

According to Tony, "the foreman pulled out his divining rods and promptly located the spot. He told us he found water pipes using the same technique all the time," says Tony.

Intrigued, Tony "had a go" with the foreman's divining rods which were "worn smooth from use. "Of course, by then I knew where the pipe was, but still, as I walked over it the movement of the rods seemed quite pronounced," he reveals.

Despite all those who assert the technique works, no one has yet claimed the Australian Skeptics' long-standing $100,000 cash reward for anyone who can scientifically prove their dowsing prowess.

One of the few to put a dampener on the technique is Adrian L, who, "in desperation to find water" on his property on the Monaro during the last drought, lost a fortune because he "listened to a water diviner". "150m down and not a drop of water. Just a huge bill," he laments.

And the final word on dowsing goes to Gary Poile of Collector who following recent rains declares, "Look, you could divine water with a broomstick out here at the moment". Indeed, little wonder nearby Lake George continues to rise.

Cryptic Clue: Is that hedge lime or green?

Last week: Congratulations to Linda Mackay of Kambah who was first to correctly identify last week's photo as the old Mt Ainslie quarry. Linda just beat Liz McMillan of Campbell to this week's bragging rights. Since the photo was taken, the rock circle has been removed. As this column has pointed out ad-nauseum over recent years, displacement of rocks and tree branches to create temporary artwork or cubbies in our nature reserves is not permitted - it can have serious impacts on many critters, especially those who live under rocks. This illegal practice spikes during school holidays and lockdowns when record numbers of kids (and big kids) flock to our parks.

Several readers also asked about the exotic graffiti, above, painted on the wall of the quarry. Renowned international language scholar McComas Taylor of ANU reveals, "It's Tibetan and says Om mani padme hung which is the mantra of Avalokiteshvara, the bodhisattva and 'patron saint' of Tibet, and of whom His Holiness the Dalai Lama is an incarnation". Oh, and yes, graffiti is also illegal.

How to enter: Email your guess along with your name and suburb to tym@iinet.net.au. The first email sent after 10am, Saturday, September 11, 2021, wins bragging rights. Double passes to Dendy, the Home of Quality Cinema will be offered again as prizes once cinemas re-open.

WINNER, BY A LONG SHOT

Just when you thought you'd never have to see another tape measure alongside a leaf adorn these pages comes this 70cm whopper from a Southern Bluegum tree. Philip Gatenby of Canberra Bushwalking Club found the leaf on a pre-lockdown walk in Burrinjuck Nature Reserve which is at the northern edge of the bluegum's range. It beats the previous record by an incredible 15cm.