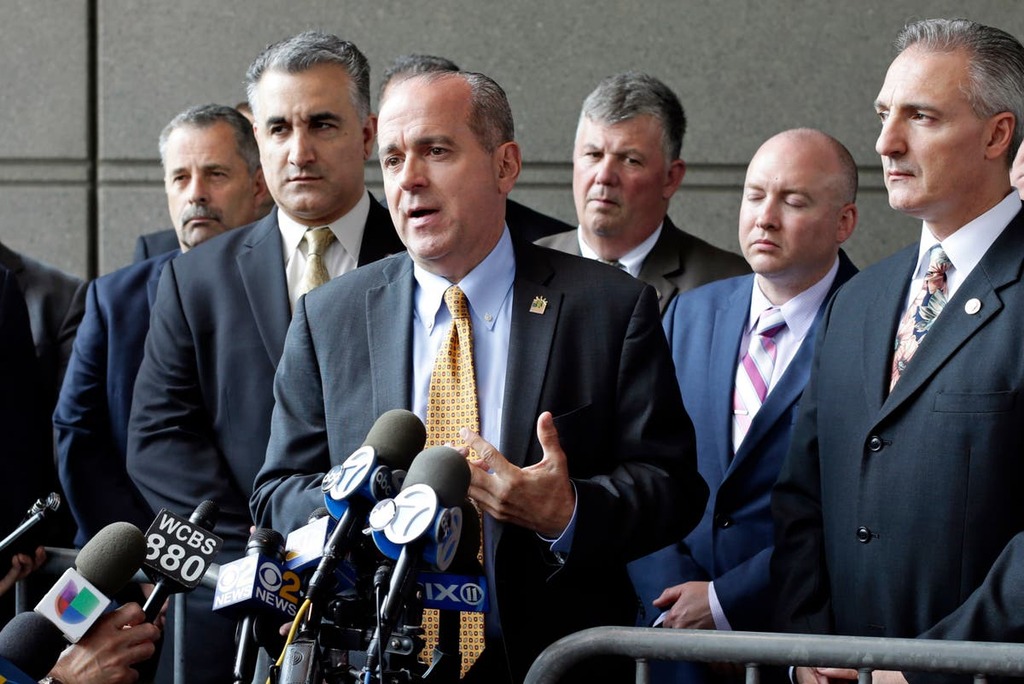 New York City’s police department placed the embattled former head of its sergeants union on modified assignment Wednesday, stripping him of his gun and shield, a day after federal agents raided the union’s office and his home.

Ed Mullins resigned Tuesday night as the president of the Sergeants Benevolent Association at the urging of its executive board, hours after FBI agents were seen carrying boxes out of the union’s Manhattan headquarters. Agents also searched Mullins’ home in Port Washington, Long Island.

Police Commissioner Dermot Shea said Wednesday that the NYPD’s internal affairs bureau, which has been probing Mullins’ fiery tweets and other activity, was working with the FBI on the investigation that led to Tuesday’s searches.

“As a result of that work, you saw some of the investigative powers being exercised yesterday,” Shea said, declining to comment further because the investigation is ongoing.

An FBI spokesperson on Tuesday confirmed the raids were part of an active probe, but could not provide details.

Mullins, a police sergeant who had been detached to the union full-time, was said to be mulling retirement from the police department rather than report to work for a modified assignment.

Mullins started as an officer in 1982 and was elected the union’s president in 2002. The union represents about 13,000 active and retired NYPD sergeants and controls a $264 million retirement fund.

NYPD personnel placed on modified assignment, often referred to as desk duty, are assigned to administrative, non-enforcement functions and must turn in their gun, shield and department identification card, according to the NYPD’s patrol guide. They are paid the same as they would be on any other police assignment.

Messages seeking comment were left with a spokesperson for the Sergeants Benevolent Association and Mullins’ union vice president, Vincent Vallelong. Under the union’s bylaws, Vallelong is Mullins’ successor as president.

The union’s board, in a note to members, said the FBI investigation appeared to target Mullins and that it had no reason to believe any other union member was involved.

Mullins is in the middle of department disciplinary proceedings for tweeting NYPD paperwork last year regarding the arrest of Mayor Bill de Blasio’s daughter during protests over the Minneapolis police killing of George Floyd.

Mullins’ department trial began last month but was postponed after one of his lawyers suffered a medical emergency. It is set to resume Oct. 27.