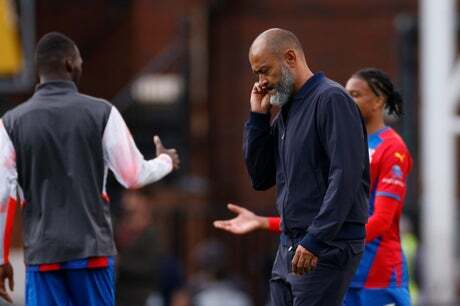 Nuno Espirito Santo described Tottenham’s lack of creativity as a “big concern” after their dismal 3-0 defeat at Crystal Palace on Saturday.

Ten-man Spurs went down to a penalty from Wilfried Zaha and a fine double from Palace debutant Odsonne Edouard after Japhet Tanganga was sent off on the hour for two bookable offences.

Spurs lost Eric Dier to injury after 12 minutes and his centre-half partner Tanganga received his marching orders for a fiery exchange with Zaha, quickly followed by a rash lunge on Jordan Ayew.

But it was Spurs’ lack of spark going forward that was most concerning, with the visitors finishing with just one shot on target and Harry Kane failing to have a single touch in the Palace box.

Asked about his side’s lack of creativity, Nuno said: “It is a big concern, we had enough quality and talent to play better.

“We didn’t do it, credit to Palace they were aggressive and they didn’t allow too much time on the ball. We lost duels, many, many situations that I think we should do much better. In terms of offensive, much improvement is required.

“It was a very, very difficult afternoon. We had a lot of obstacles during the game to overcome. It was not easy for the boys today.

“A lot of situations we have to look at and be fair to say that we didn’t perform as well as we should.”

Nuno was about to introduce winger Bryan Gil when Tanganga was sent off and instead replaced midfielder Harry Winks with Ben Davies, who conceded the penalty when Conor Gallagher’s cross struck his arm.

But even at 1-0 down, the Spurs head coach chose not to use his final substitute, leaving Gil and club-record signing Tanguy Ndombele on the bench.

“Our idea previously was [to bring on Gil] just at the right moment, then the precise moment we’re to make the sub, we’re made one man less and we had to find the balance of the team again, to go for a defender, so the decision was made based on that,” Nuno explained.

Nuno was without South American trio Giovani Lo Celso, Cristian Romero and Davinson Sanchez, who are training in Croatia to avoid quarantine, while Heung-min Son and Steven Bergwijn missed out after picking up knocks on international duty.

But the manager refused to use the absentees as an excuse and says Spurs have a good enough squad to play better.

“This is what the squad is for. No kind of excuses,” Nuno said.

“I believe that we have a good squad and enough quality and talent to overcome all the situations.

“What happened today and what happened during the week, it’s going to repeat all throughout the season so we’re going to have to be ready.

“The players have to be ready to step in and perform, and perform better and it’s my job to find the higher levels of performance that I believe our squad has.”

Asked when Son could return from a calf strain sustained on South Korea duty Nuno said: “I don’t know. He doesn’t look well.

“Stevie, let’s wait and see this week, but hopefully they will improve and be available for the next game, let’s see.”