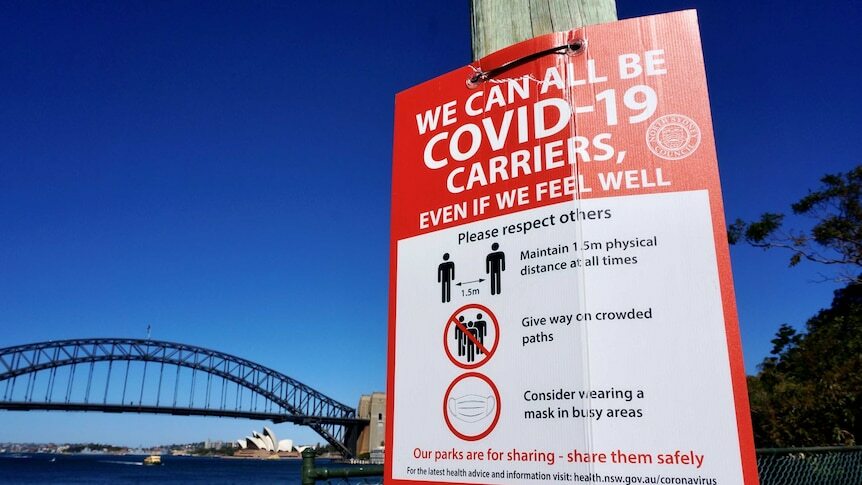 Premier Gladys Berejiklian warns there will be different rules for vaccinated and unvaccinated people once NSW opens up as the state records 1,257 new COVID-19 cases and seven deaths.

Ms Berejiklian said the government was still working on the plan for what would happen once NSW reached 80 per cent of residents being fully vaccinated.

But she said that going to shops and restaurants or travelling by air may only be available for those who could prove they were double jabbed.

"I don't want people to think they can sit back, let everybody else do the hard work and then turn up when it's 80 per cent and get everything else that vaccinated people are," she said.

"A private business might choose only to welcome patrons who are vaccinated.

"An airline might say you can only fly with us if you're vaccinated."

Speaking on Sydney radio station 2GB earlier, Deputy Premier John Barilaro suggested that any discrimination between the two groups would be short-lived.

Mr Barilaro said many businesses "don't like the idea" of opening up at 70 per cent for vaccinated customers only which is expected to happen on October 18.

He said that the same freedoms would be enjoyed by all once the state hit 80 per cent vaccinations.

"We are turning unvaccinated customers [away] for a period of probably three weeks," he said

The Premier fronted the media this morning despite announcing on Friday that her daily briefings would end from Monday.

She said her appearance did not signal a "change of heart".

"I want to stress that nothing has changed from my comments from last week.

"I'm on the job 24/7. In addition to managing the pandemic, we manage the state moving forward and I'm always available.

Ms Berejiklian appealed to people "not to let their guard down" despite the easing of some restrictions on Monday.

"It's way too early for any of us to get complacent and we are concerned that an unexpected event, a super spreader event can suddenly have a major setback," she said.

Ms Berejiklian said there had been a "slight slowdown" in vaccination rates.

The latest vaccination figures showed that 46.2 per cent of adults had received two doses and 78.5 per cent had their first dose.

A woman in her 60s died at Campbelltown Hospital while the other fatalities were aged in their 80s and 90s.

Ms Berejiklian said there had been a stabilisation of case numbers in some of the local government areas (LGAs) of concern but there was concern about an increase in cases in the inner city areas of Glebe and Redfern.

She said cases had also stabilised in some regional areas but case numbers were rising on the Central Coast and in Wollongong.

There were 12 new cases in western NSW: five in Bathurst, four in Dubbo, two in Bourke and one in Walgett.

In the far west of the state, there were seven new cases, four in Broken Hill and three in Wilcannia.

The Yass Valley Council area in the NSW Southern Tablelands will go back into lockdown for two weeks, from midnight tonight.

A positive case of COVID-19 has been confirmed in the community, following a recent positive sewage detection.

Stay-at-home orders apply to all people in the Yass Valley Council area, and includes anyone who visited the region on or after Thursday, September 9.

The Yass Valley Council area had only been released from lockdown three days ago.

The Premier said October was anticipated to be the month when hospitals would come under the greatest strain.

But she said plans were in place to make sure the health system would be able to cope with the expected increase in admissions.

She said there was capacity for a more than 200 per cent increase in intensive care beds, from 500 beds to 1,550 beds.

There are 1,189 COVID-19 cases admitted to hospital, with 222 people in intensive care, 94 of whom require ventilation.

The Premier was asked about the timing of the lockdown and when she first got health advice about a party in West Hoxton being a super spreader event.

"Our public health officials are the best in the land and the fact that we managed to keep the virus as suppressed as we did especially around the 200 case mark.

"I look back now and think we did remarkably well to suppress the virus with a largely unvaccinated population."