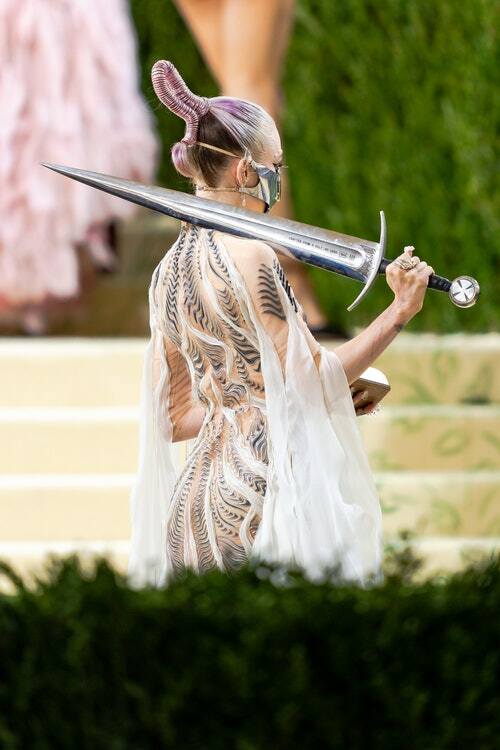 If you caught Vogue’s Met Gala coverage last night (or, alternatively, if you’ve been keeping an eye on social media), you may have seen one very unique accessory: a full-sized sword. Grimes, recording artist and mother to Elon Musk’s latest child, wielded the arresting accessory on the red carpet as easily as if it were a handbag. She says the look, complete with a custom gown from Iris van Herpen, was inspired by the universe of Dune.

“It’s not a prop sword, I tried to pick it up and this is not really a one-handed situation,” she told Vogue. “It’s from these people who are getting people’s guns who don’t want to have their automatic rifles anymore are melting them down and making them perfect replicas of medieval swords, which I think is just so cool.”

Grimes’ sword is one of the first made by MSCHF for the gag company’s latest drop. Her succinct summary of the “Guns2Swords” program is accurate. MSCHF, the prankster co-op known for sticking its neck out despite legal risks, is taking old guns and re-forging them into bad-ass swords.

Guns2Swords is MSCHF’s 54th drop and definitely one of its most extensive. This isn’t just a digital product to raise awareness. MSCHF is really taking apart guns, melting down the metal, and re-forging them into swords.

“Sex sells! We propose that guns are a symbol that can be replaced by a different symbol without loss of satisfaction and at reduced threat to others,” the program site reads. “Guns2Swords substitutes the symbol for the real and neuters reality while salving the psyche.”

And these new symbols aren’t just for current gun owners. If you don’t have a gun but still want one of MSCHF’s badass sword replicas, you can purchase one through the Guns2Swords site for $5,000.

Much less dangerous than a gun —

This program — while definitely still lining up with MSCHF’s general ideological principles — is perhaps the collective’s most socially conscious move yet. Gun buyback programs are meant to reduce gun violence by taking weapons out of circulation, but the little research we have on these initiatives shows they’re not very effective.

Will MSCHF’s program actually make a noticeable dent in the overwhelming gun problem ravaging the United States? Absolutely not. But the swords do look cool as hell, and they’re not actually very dangerous at all, especially if you, like Grimes, can’t lift one over your head without a struggle. If it raises some awareness of gun violence in the process — or even takes a few guns off the streets — Guns2Swords will have fulfilled its purpose just fine.