'What more could this man have done'? Djokovic, Andrews begin centre court showdown 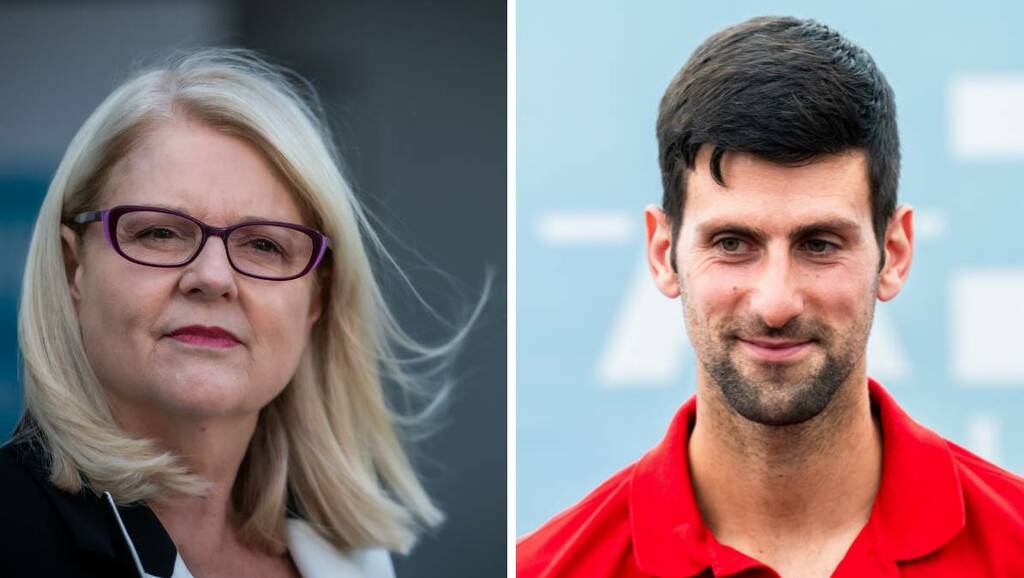 The judge presiding over Novak Djokovic's cancelled visa case has questioned what more the Serbian tennis star could have done to prove he had permission to enter Australia.

Lawyers for Home Affairs Minister Karen Andrews have now begun mounting their case against the world No.1, after technical glitches marred the start of the Federal Circuit Court hearing on Monday morning.

Djokovic will not be deported until at least 8pm after an injunction allowing him to remain in Australia was extended just after 4pm.

The tennis star has been allowed to leave immigration detention to watch the hearing at another location, but will have to return once it concludes.

The blockbuster hearing is proceeding as planned on Monday after the Morrison government failed in its bid on the weekend to have the case delayed for two days.

The 34-year-old is fighting to avoid deportation so he can line up at next week's Australian Open.

Djokovic faces the prospect of having his visa recancelled and being forced back into detention even if he wins his high-stakes legal fight, according to the federal government's lawyers.

The 20-time grand slam champion has spent the past four nights in immigration detention in Melbourne after his visa was cancelled upon arrival in Australia.

Djokovic's lawyers are arguing their client had permission to land in Australia and compete in next week's Australian Open unvaccinated, citing his approved visa, a medical exemption from Tennis Australia and the Victorian government and a travel declaration which "indicated" he met requirements for quarantine-free travel.

Judge Anthony Kelly said it was a "relatively significant fact" Djokovic had obtained a medical exemption after an assessment from independent medical experts.

That exemption process was run by Tennis Australia and the Victorian government. It did not assure him of entry into Australia.

However, Djokovic's lawyers noted proof of the exemption was uploaded to their client's travel declaration - a system run by Home Affairs - which was approved before he landed in Australia.

Acknowledging the official who cancelled Djokovic's visa had access to the declaration, Judge Kelly asked: "What more could this man [Djokovic] have done?"

Court documents showed the unvaccinated tennis star was granted a medical exemption to compete in the tournament on the grounds he had recently recovered from a case of COVID-19.

Djokovic "recorded" a positive result on December 16 last year, according to court filings. Pictures have emerged of a maskless Djokovic attending a children's tennis event the following day, raising questions about his infection.

Contention over whether an infection within the previous six months was grounds for a medical exemption for overseas travellers is at the heart of the saga.

Djokovic's lawyers will also argue officials "radically and fundamentally" misapplied guidance from Australia's expert vaccine panel - known as ATAGI - in ruling a recent infection with COVID-19 was not grounds for a medical exemption.

Lawyers for Ms Andrews have rejected Djokovic's arguments in a 13-page submission to the court, published online late on Sunday.

Their submission pushed back against the tennis star's claim he had "done everything he had been asked to do" in order to secure entry the country, pointing out there was no "such thing as an assurance of entry by a non-citizen into Australia".

It also made clear the travel declaration document which Djokovic had relied on provided no assurances his medical exemption would be accepted.

The government has also insisted a recent infection was not grounds for a medical exemption from vaccination under ATAGI guidelines.

"The 'radical' and 'fundamental' error for which the applicant contends is thus not made out," the submissions reads.

Ms Andrews' lawyers will push for Djokovic's appeal to be dismissed with costs, and argue it would be "inappropriate" to immediately release him.

The government has made it clear Djokovic is free to leave Australia at any time. Two other Australian Open participants who arrived under similar circumstances have already left the country.

The submissions notes if the court does rule in Djokovic's favour, the government could consider "another cancellation decision".

It noted a decision which freed Djokovic would not prevent him from being redetained.