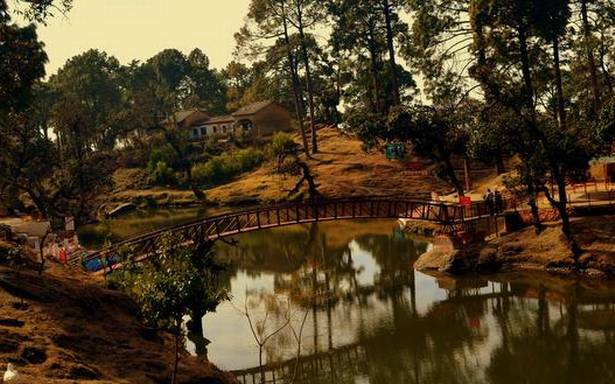 “Pull up your mask properly, and stand away until allowed to enter,” commands a stern voice from behind a manned entrance. After hours of driving across the less popular roads of Uttarakhand, including long, secluded expanses of endless forests, I let my guard slip a bit and allowed my oxygen-starved system to draw in lungfuls of mountain air. The military checkpost at the entrance to Lansdowne, though, snaps me right out of it. Like most cantonment towns in India, martial law rules the roost, making it a bittersweet mix: a regimented but timeless place that could not have been preserved otherwise.

Cantonment towns are the perfect antidote to hill station destinations. Having barely ever aided tourism, they are a boon in disguise for conservation. Lansdowne is no different, and much like the rest, was formed for military purposes. It was founded and named after Lord Lansdowne, the then Viceroy of India, in 1887, and the first battalion of the Garhwal Rifles was moved there the same year from Almora. Lansdowne was the only major town established after Almora in the 1870s, a fact I find hard to process considering that today, it’s one of the quietest hill stations I’ve ever been to.

On the list of popular names from Shimla in the west to Mussoorie and Nainital, and all the way east to Darjeeling, Lansdowne barely makes a guest appearance. It’s more comparable to other cantonment towns like Ranikhet and Dalhousie, but somehow, despite its checklist complete with the war memorial, parade ground, and a regimental museum named after Victoria Cross awardee Darwan Singh Negi, Lansdowne seems like the introvert that sits quietly at the corner bench. In a long walk spanning its multiple ridges, I try to dissect this ambiguity.

Leaving behind the cluster of budget hotels that mark the entrance to the town and sprout again amidst general stores in the small main market, I spiral up the empty stretches of Lansdowne. The tarmac-lined paths bordered by dense oak and rhododendron thickets lie quiet, their bark gleaming with the florescence of monsoon moss and the understory rich with grey lichen dotted with colourful, wild mushrooms.

My bare face breaks through the film of mist like Lansdowne shatters the myth of packed hill stations, and I pick one of the many forks in the lower mall that leads to St. Mary’s church. Standing on the ridge since 1896, it fell into disuse when India became independent, but has been beautifully restored by the Garhwal Rifles since. Cordoned off by chains and boundaries, the church is closed in the afternoons, and a handful of guests from the café nearby try and take the best selfies they can. They are disappointed that they can’t go inside, but this is the price cantonment towns extract in return for their gift of preservation. Further up the ridge, I walk past Tip-N-Top point, more popular than the town’s more scenic spots. A bit ahead is a temple that most visit, one I quietly skirt; there is a string of temples in and around Lansdowne, but I’ve found mine already.

My shrine is the unmarked spot where I stand and watch the rain-drenched expanse of green valleys below, the monsoon sun shining like a pale coin through the screen of grey clouds that float in front of it. This is where I turn around, and begin my way down. I will be doing a little loop, walking past Bhulla Tal, a small lake seized by boating enthusiasts, and making a pit stop at a nearby eating joint for a late lunch. These are all the hotspots that I come across, and it’s not really the rains or the pandemic that has dammed the tourist traffic here. It’s simply the air of quietude that cantonment life and its rules lend themselves to — from tourists who have limited options to stay and explore, to locals who need a series of permits for the simplest of house repairs, everyone must pay a price. But when it comes to the mountains, we were debt-ridden anyway.

Born and brought up in the Himalayas, the author writes on culture, ecology, sustainability, and all things mountain.