Not if, but when: unless Papua New Guinea prepares now, the next big earthquake could wreak havoc in Lae

Earthquakes can be especially devastating for developing countries, where competing priorities can stymie resource allocation towards earthquake resilience.

Even in tectonically active areas, where tectonic plates meet and scrape against one another, large earthquakes may not occur often enough to seem like a priority compared to more immediate concerns. That is, until one devastates a populated area, as we’re now seeing with the tragedy in Afghanistan.

Nowhere is this more true than in Papua New Guinea. PNG is situated in one of the most tectonically active areas in the world – one that experiences more than 100 earthquakes of magnitude five or greater each year.

PNG’s stability and economic development are of great interest to Australia. Yet earthquake scientists know recent development gains could be threatened by earthquakes.

We helped create an updated national seismic hazard map for PNG based on modern earthquake data and knowledge of active faults.

The map was developed in a partnership between Geoscience Australia and the PNG government’s Port Moresby Geophysical Observatory. First published in 2019, it’s now providing the backbone for our ongoing work into earthquake risk assessment and management in PNG.

The high level of earthquake activity in PNG was already recognised in national earthquake hazard maps developed in 1982. But the poor-quality data used in these early hazard maps resulted in broad areas of moderately elevated hazard – and did not reflect the very high hazard levels near active faults.

Worryingly, PNG’s current building codes are still based on these outdated maps. Buildings and infrastructure near active faults may be vulnerable to large, local earthquakes – particularly since PNG has adopted “Western” construction materials such as masonry, which can be less resilient than traditional wooden structures.

With a population of more than 100,000, many lives and livelihoods would be threatened by a large earthquake. Lae is also a major economic hub for the country. It has the largest port and is the starting point of the transport artery running through mainland PNG.

Concerns raised by the latest hazard map about Lae’s potential vulnerabilities has led us to initiate the Lae Earthquake Risk Project, involving the University of Technology in Lae and the University of Papua New Guinea in Port Moresby.

Our research goal is to better understand and model what the potential impacts of a Ramu-Markham earthquake may be, and how Lae can boost its resilience in the event of a major earthquake.

How could a Ramu-Markham earthquake happen?

Large earthquakes happen when two tectonic plates move against each other.

In the case of the Ramu-Markham fault system, two plates are converging, or moving towards each other. This movement results in friction along the fault, which builds up stress. An earthquake happens when the built-up stress surpasses the frictional strength along the fault.

While we often think of a geologic fault as a “line”, a major fault system like the Ramu-Markham consists of many segments. Any one of these segments (or a combination) may be active.

Segments are often overlapping, and each has a distinct level of activity. We can record this activity using precise GPS measurements of ground movements, also called “strain”.

Our work started by identifying exactly which segments of the Ramu-Markham fault system are active and accumulating strain energy that might be released in an earthquake. We found the ground movement in this fault system can be explained by activity on a single segment called the Gain fault.

This fault segment is more than 100km long and most of Lae lies within 15km of it. A large earthquake at this distance could cause widespread damage.

Although GPS measurements of ground movement are consistent with activity being confined to the Gain fault only, this may not be the only way to explain the data.

The Bumbu fault is another segment of the Ramu-Markham fault system, further south, that cuts through Lae’s CBD. If it’s active, it is of potentially greater concern than the Gain fault.

Studies from the 1990s on the geology of Lae’s urban centre suggest a “major tectonic event” happened about 250 years ago, possibly on the Bumbu fault, which changed the course of the Bumbu River flowing through Lae today.

Although this event was prior to European contact, it’s supported by local oral histories and other analyses of elevation data taken from around Lae. Questions remain over whether it was a single major event, or a series of smaller events over an extended period.

In either case, being able to verify activity on the Bumbu fault would raise Lae’s earthquake risk to a new level.

The Lae Earthquake Risk Project is ongoing. In addition to more GPS measurements of ground motion, it will involve setting up earthquake-monitoring stations in Lae, and advanced satellite-based radar analysis. The latter should provide a much more detailed picture of which fault segments are active.

Once we know which active segments can produce earthquakes, we can begin to estimate the intensity of shaking these earthquakes may cause in Lae – and what effects they may have on the city’s built environment.

This will hopefully provide specific guidance for constructing new buildings in Lae, and strengthening existing ones. These are the most important steps that can be taken to reduce the impact of future earthquakes.

Read more: Australia is no stranger to earthquakes, yet our planning polices have not adapted

Phil Cummins works for Geoscience Australia. The National Earthquake Hazard Assessment of PNG and Lae Earthquake Risk projects are funded by the Department of Foreign Affairs and Trade (DFAT).

Hadi Ghasemi works for Geoscience Australia. The National Earthquake Hazard Assessment of PNG and Lae Earthquake Risk Assessment projects are funded by the Department of Foreign Affairs and Trade (DFAT). 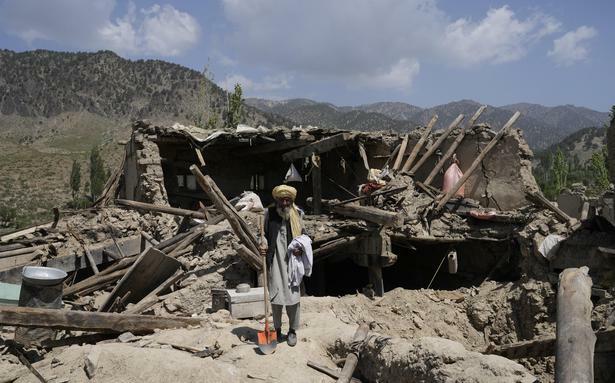 Explained | How are earthquakes measured?
What is at the heart of earthquakes? Can they be predicted? Is it possible to set up early warning systems?

Numerous problems have been identified on Australian-built patrol boats gifted to Pacific Island nations, prompting the Defence Department to issue…