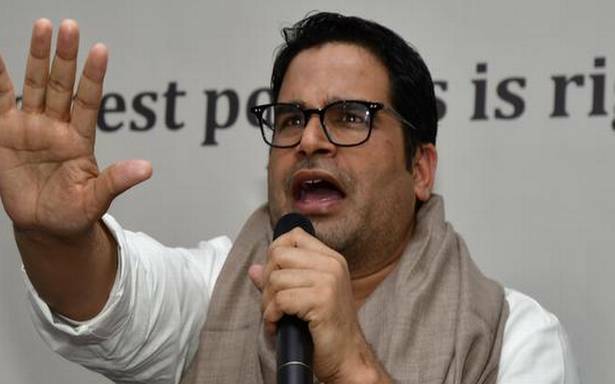 In a tweet, the TMC directly attacked former Congress chief Rahul Gandhi for his defeat in Amethi, without naming him.

“Rich words coming from a first-time CM. Punching above your weight doesn’t bring honour to you, Mr. @bhupeshbaghel. What a shoddy attempt to please the high command! By the way, is @INCIndia going to try to erase the historical defeat at Amethi through yet another Twitter Trend?” the TCM said Twitter.

This was in response to Mr. Baghel’s tweet that said, “People looking for a ‘national’ alternative based on poaching INC [Indian National Congress] functionaries who can’t win even their own seats is in for a big disappointment. Unfortunately, to become a national alternative deep-rooted and concerted efforts are needed and there are no quick-fix solutions.”

The Twitter war was first triggered by Mr. Kishor, who said that those who were hoping for quick revival of the GOP on the basis of the Lakhimpur Kheri incident would be disappointed.

Hitting back, chief Congreas spokesperson Randeep Surjewala said, “It’s a grave sin if anyone views Lakhimpur Kheri in terms of political gain or loss. I wouldn’t like comment [on] a consultant’s remarks.”

Mr. Baghel’s tweet and Mr. Surjewala’s comments were a direct response to Mr. Kishor’s tweet earlier in the day.

“People looking for a quick, spontaneous revival of GOP led opposition based on #LakhimpurKheri incident are setting themselves up for a big disappointment. Unfortunately there are no quick fix solutions to the deep-rooted problems and structural weakness of GOP,” Mr. Kishor had tweeted on Friday.

His tweet is significant as it comes in the midst of speculation that the election strategist could be joining the Congress as part of the “GOP’s revival plan”.

Though he didn’t name any leader in his tweet, the obvious reference is to the buzz that Congress general secretary Priyanka Gandhi Vadra’s arrest in Sitapur, bordering Lakhimpur Kheri district, created in the media as well as social media platforms.

Among Opposition leaders, Ms. Vadra was the first to reach Lucknow and try to go to the violence-hit region of Tikonia in Lakhimpur Kheri, but was stopped by the Uttar Pradesh administration.

Eight people, including four farmers, were killed in the October 3 violence after a vehicle — which Minister of State for Home Affairs Ajay Mishra Teni’s son Ashish Mishra was allegedly travelling — ploughed into a group of protesting farmers.

In the early morning of October 4, Ms. Vadra reached the area bordering Sitapur but was not allowed to move further and detained for over two days at a government guest house.

However, the episode also revealed the divide within Opposition ranks, as Congress general secretary (organisation) K.C. Venugopal, in a letter to Uttar Pradesh Chief Minister Yogi Adityanath, questioned why the government didn’t stop a a five-member TMC delegation’s visit to the area on October 5.

But beyond the immediate context, Mr. Kishor’s tweet indicates a falling out between him and the Congress. Sources told The Hindu that the Congress was divided over his parallel induction as a general secretary and as a member of the Congress Working Committee.

While some senior leaders favoured his entry on his terms, several others, including the group of 23 (G-23) letter-writers or reformists, had serious reservations.

Several loyalists of the Gandhi family were also suspicious of Mr. Kishor after he played a key role in former Goa Chief Minister and senior leader Luizinho Faleiro’s defection to the TMC ahead of next year’s Assembly polls.

After Mr. Kishor met the Gandhis in July to discuss a revival plan and his possible entry, the party had undertaken an elaborate exercise to seek feedback from senior leaders, including the CWC, and had left the final decision to party chief Sonia Gandhi. However, since then, both sides had maintained a studied silence on the subject.