No other employer would tolerate Craig Kelly. Why do the taxpayers? 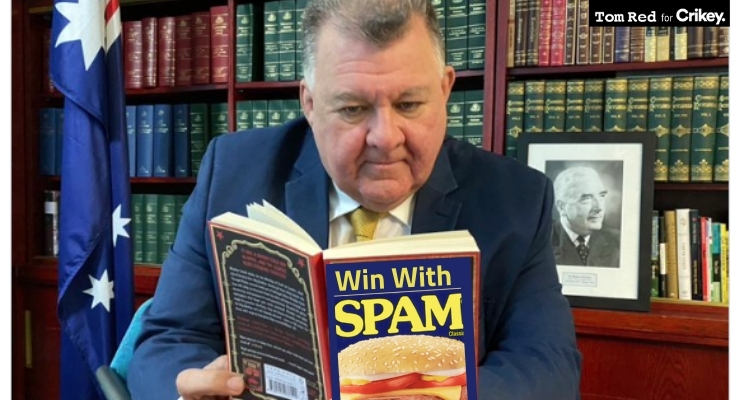 In the past week I’ve been contacted by the tax office warning of an impending arrest, three solar installers offering the deal of a lifetime, and an energy company wanting to know why I don’t want to change suppliers.

Then there was the scam demanding bill payment for a non-existent order on Amazon, a research company interested in finding my “pulse” on various issues, and two blokes who want to meet, with their future more than mine in mind.

But perhaps the most annoying — and dangerous — is the spam from MP Craig Kelly for the United Australia Party, warning of adverse reactions to the COVID-19 vaccine. No explanation, just a 73-page downloadable report with the clear message that COVID vaccines might be dangerous, hinting that the rollout is a threat to voters’ health and safety.

Millions of voters received the text, which linked to a website with the Therapeutic Goods Administration (TGA) logo, and which readers believed featured TGA credible information. That organisation is seeking legal advice as the data was out of context.

It is not only reprehensible that an MP would mislead the public. It should be a crime for politicians or parties to exploit the community’s anxiety over vaccines, particularly during a pandemic which is killing Australians daily.

The maverick MP’s move only feeds that sizeable chunk of anti-vaxxers spending their time online warning that the shot inserts a 5G chip into our skin, or other similarly preposterous conspiracy theories.

Now, Kelly is not the only political dill promoting freakish COVID claims. George Christensen takes the cake for his Facebook post expressing his happiness at snagging unproven COVID treatment ivermectin before the TGA got to ban it.

“It was prescribed to me, in safe doses, by a qualified doctor, despite the media and the so-called experts claiming it’s not safe and only meant for horses,’’ the Queensland MP told his followers.

Perhaps the best response was the quick-witted missive by Queensland Deputy Premier Steven Miles, who shot back: “George, you are not a horse.”

Humour aside, Christensen’s stance — where he encourages voters to snare the drug before it is taken banned — should not be tolerated. Like Kelly, he is on the public payroll working actively to derail legitimate and desperately needed health campaigns to protect the public. No other employer would tolerate it. Nor should the parties who put them there and nor should the voters who are the victims of their claptrap.

Anxiety around COVID is at an all-time high. Thousands upon thousands of Australians are waking up daily, plagued by an uncertainty around health and loved ones and business concerns and mortgage repayments.

Year 12 students soon to begin their final school exams are worried about the impact of lockdowns and whether that will stop them pursuing their dreams. Childcare workers see toddlers struggling to share or socialise with peers. Others have not seen family for weeks or months.

COVID has presented a community challenge and the response needs to provide the community with confidence; the contributions of the UAP and Christensen just feed community anxiety. And they risk undermining both the national response to the outbreak and the vaccine rollout where we need to sing from a national hymnbook.

NSW Deputy Premier John Barilaro decided to sing out of tune yesterday, saying restrictions would be lifted “including for the unvaccinated’’ when 80% of people aged 16 and over were fully vaccinated.

The impact of that statement wasn’t lost on his leader, with Premier Gladys Berejiklian having to quash suggestions that the unvaccinated should share the spoils of those lining up for the jab. Her comments were important given the slow down in vaccines being administered this week:

I want to say it clearly: if you are not vaccinated, you will not have the freedoms that vaccinated people have even when we get to 80% double-dose.

That’s the message we need to hear in NSW and in every other state, and supported by the Commonwealth. That’s the message all our political parties need to share. And it’s a message most of us might even cop on text.