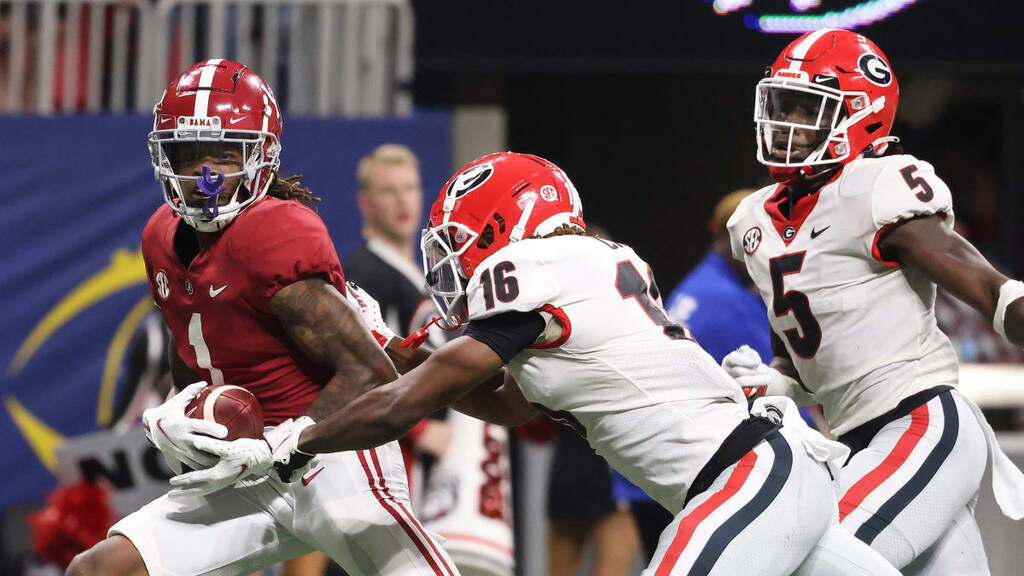 Alabama football was down one star wide receiver entering the game, with John Metchie suffering a torn ACL in the SEC championship against Georgia. In the first half of tonight's national title game, Jameson Williams, the team's other standout outside threat, suffered what appeared to be a serious leg injury. He will not return to the game, Chris Low of ESPN reports.

Williams was productive in the first half, catching four passes for 65 yards, 40 of which came on his final reception. He went down in a heap after getting to Georgia’s 35-yard line, and was taken off the field and into the medical tent.

Up 9–6 after the first half field goal fest, Saban addressed the huge injury during his halftime interview with ESPN, emphasizing the opportunity this opens up for the team's young pass catchers.

Alabama football is no stranger to young, seldom-used players shining in big spots against Georgia on the biggest stage. In the 2018 edition of this national championship matchup, Saban made the bold decision to bench Jalen Hurts for Tua Tagovailoa at halftime, which resulted in a comeback title win.

Tonight, the Crimson Tide have their Heisman winning quarterback locked in. The quality of his targets is the main question now.

Tight end Cameron Latu, a junior with 21 receptions for 308 yards and seven touchdowns on the year, leads the way with 70 yards on two receptions.

Slot receiver Slade Bolden, a junior with 35 receptions for 356 yards and three scores on the year, is the leading healthy receiver for the team. He has a team-high six receptions for 37 yards.

Freshmen Ja'Corey Brooks and Agiye Hall also have receptions on the game so far.