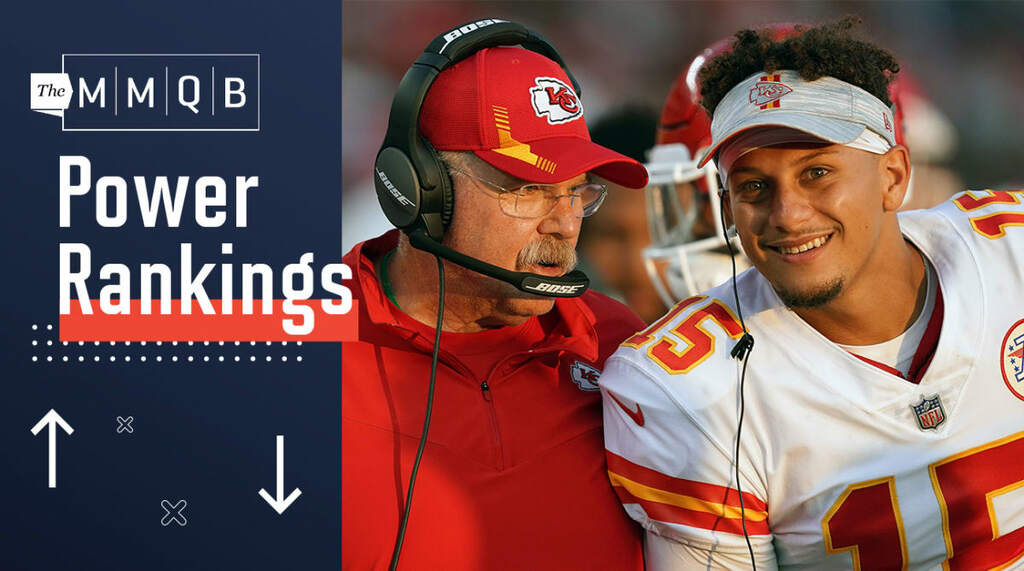 Welcome back to another season of NFL power rankings. Here’s how this works: We are going to rank all 32 teams in order of how good they are. Revolutionary, we know.

Last season we conducted our staff-wide poll at a few key checkpoints throughout the year, but our writers spent most of the season taking turns doing the rankings individually. That’s our plan again for 2021, and we broke out the poll for our preseason edition.

The Chiefs start in the top spot despite losing last year’s Super Bowl. But they have been to the big game two years in a row and are the betting favorites to win it again. They will probably be the preseason No. 1 many more times in the Patrick Mahomes era.

The Packers dipped to No. 6 in our last poll, which came right after the news of Aaron Rodgers’s unhappiness broke on the first day of the draft. With their MVP now officially back in the fold for 2021, Green Bay has climbed to its rightful place. (For this year at least.)

The defending champs got only one first-place vote in our poll, but they’ll get the first chance to change our minds with the season-opening game Thursday night. If they pick up where they left off, we could see them back on top soon.

The Rams won a lot of games with Jared Goff, but should be no slight to him just how excited everyone is to see Matthew Stafford piloting this offense. Expectations are very high in L.A.

Josh Allen took a major leap last season, and now expectations in Buffalo are higher than they’ve been since fans wore Starter jackets to the games. This team is good enough to beat anyone its path.

We have been guilty of hyping up the Browns too much in the preseason (who hasn’t?), but this year feels different. After demolishing the Steelers for a wild-card win, the Browns have a major monkey off their backs.

The Ravens’ late-season charge to the playoffs in 2020 reminded us just how good this team can be. There’s always so much focus on Lamar Jackson, but don’t forget how good this defense is.

The 49ers would like to just pretend 2020 never happened. Just getting back to full strength would help this team bounce back in a major way. But if Trey Lance makes them more dynamic on offense, they could soon be much higher on this list.

The Titans have star power and are coming off two straight trips to the playoffs, but right now our voters have them below the top-tier teams.

The Seahawks are our third NFC West team in the top 10, which speaks to both the talent they have and the difficult road they’ll face this season.

The Patriots have opted to go with rookie QB Mac Jones from Day One, even letting Cam Newton walk instead of keeping him as an insurance policy. Our voters are pretty high on New England, either because of or despite that decision.

Everyone’s favorite sleeper team every September now has a young franchise QB and a new coach in place.

The Colts have had one of the NFL’s most complete rosters for a few years now, and now Carson Wentz is their latest attempt to fill the hole left by Andrew Luck’s retirement.

Is this Ben Roethlisberger’s last ride? He has a defense in place for him to go on one last run, but the offensive line will have to keep him upright.

The Saints are going with Jameis Winston to fill Drew Brees’s shoes, and now we’ll learn more about what a QB whisperer Sean Payton is.

Dak is back, and if Prescott plays like he did before his injury last season that could be all it takes to push the Cowboys back to the top of the NFC East.

Washington won the division at 7–9 and then hung in a playoff game with Taylor Heinicke last season. Nobody will take this team lightly, given what we’ve seen from that defense.

The Broncos’ roster is loaded in several spots, but how far can Teddy Bridgewater take them in a tough AFC West?

The rumors have swirled, but Tua Tagovailoa will get his chance to lead this team into the season. The Dolphins made a jump last season behind their defense, but our voters once again have them just outside the playoff picture.

The Vikings have alternated seasons in and out of the playoffs since Mike Zimmer got there, and the pattern says this year they’d be in. But our poll has them out, which is how it often goes after a down season.

It’s tough to find consensus on anything these days, but it seems everyone in the country has at some point this offseason uttered the sentence, “It’s an important year for Daniel Jones.”

The Cardinals have a lot of talent but are stuck in the toughest division in football. But it’s now Year 3 for Kliff Kingsbury and Kyler Murray, so the expectations are higher.

By sticking steadfastly to the Andy Dalton plan, the Bears have become one of the more interesting teams in the league. When will Justin Fields start? Everyone will just keep asking until it happens.

The Falcons could have opted for the full teardown, but instead brought back Matt Ryan while they try to patch up some of the issues they’ve had the last few years.

The Panthers were a fun little surprise early last year, until the bottom really fell out. We’ll see if Matt Rhule’s squad can recapture that mojo with Sam Darnold and hopefully a healthy CMC leading the offense.

It’s Year 4 of Vegas and Year 2 of Jon Gruden. Will this be the year the Raiders climb over .500?

The Eagles are just one year removed from three straight trips to the playoffs, but what a turbulent year it was. The team still has some talent as it reboots for the Nick Sirianni era, but it’s a long climb from here.

There is optimism at the start of the Urban Meyer and Trevor Lawrence era, but just remember that these things often take time.

How Joe Burrow looks coming off last season’s injury will be more important than wins and losses this year.

The Jets are starting over with yet another first-round quarterback. Will things be different this time? Most people seem to believe so.

The Lions are in what should be a multiyear rebuilding project, but it will be interesting to see how Dan Campbell’s schtick plays if and when the losses start to pile up.

On paper, the Texans have the league’s worst roster. This season has the potential to be an all-time trainwreck.