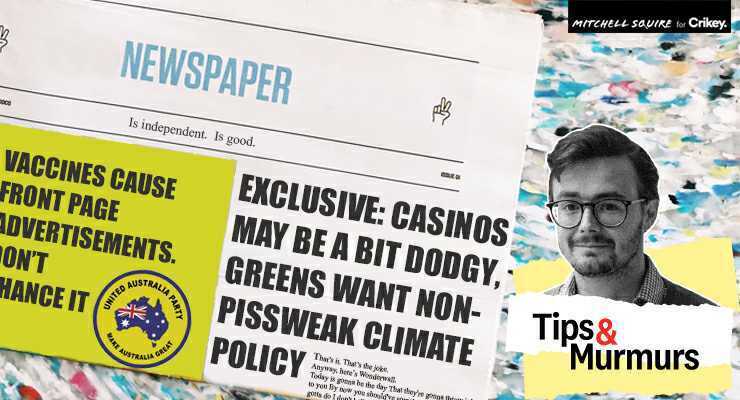 What do you know? Yesterday’s Joe Hildebrand contribution to the laughable News Corp push for net zero by 2050 is emblematic of the campaign as a whole. Delivered with a wide-eyed faux-wackiness that would be merely grating (instead of unbearable) if Hildebrand were half his actual age, it focuses on the Greens’ decision to vote against the Rudd government’s Carbon Pollution Reduction Scheme (CPRS) back in 2009. Yep, we’re doing all this again.

The supposed significance of this moment may be the one article of faith News Corp and Kevin Rudd still share. This significance has of course been retrofitted. As Bernard Keane has detailed, the CPRS was inadequate policy and, more importantly, was later replaced by a better scheme, which ran successfully for two years before the Liberals came to power (riding a wave of News Corp adulation) and scrapped it.

But it suits everyone invested in News Corp to treat the CPRS vote as some kind of Rubicon moment. It feeds the “extremists and vandals on both sides” narrative and helps blur the active role News Corp has played in stoking opposition to climate change action and elevating denialist voices. It blurs the relentless obstruction from the Coalition over the same period. And like any journalism that suits everyone in power, it is utterly useless.

It’s in the Palmer his hand Here at Crikey, we’re always keeping an eye on Craig Kelly’s and Clive Palmer’s latest antics. A week ago, we pointed out that the millions of views on Kelly’s campaign ads appeared to be generated through paid advertising, rather than organic, viral interest. But what about the other side of the equation? What of Google’s role? It has taken more than $1 million to promote the party which has promoted misleading use of statistics to undermine vaccine confidence.

It’s taken down at least one advertisement for the United Australia Party — but not before the millionaire magnate paid it more than $100,000 to show it to somewhere between one and 10 million Australians over eight days. And while the platform doesn’t allow us to see the video taken down or what specific rule it broke, our records show it was a Kelly speech in Parliament about vaccines and lockdowns.

We’d say better late than never… but when you’ve already taken cash to show an ad to twice the population of Tasmania, it is getting rather late.

Consult this One of the great themes of Crikey over the past two years has been the various sectors who, far from struggling, have prospered during the time of COVID. More and more, the big consultancy firms are looking like biggest winners of all. InnovationAus reports that the very lucrative creep of consultancies into the public sector continues to accelerate:

The Department of Industry, Science, Energy and Resources paid Boston Consulting Group nearly $400,000 for just a week’s work in September to provide advice on its ‘support offerings’.

In the same week, a contract was made public revealing the department would pay fellow consulting giant McKinsey $1.3 million across just over a month to advise on the use of technology to reduce emissions.

Same old scoops It strikes us here in the bunker that since Donald Trump was lanced from the White House, no one’s bothered to do a truly striking scandal — Labor riven with branch stacking? Casinos laundering money? We’ve heard it all before. Is this the reason no one buys the papers any more?