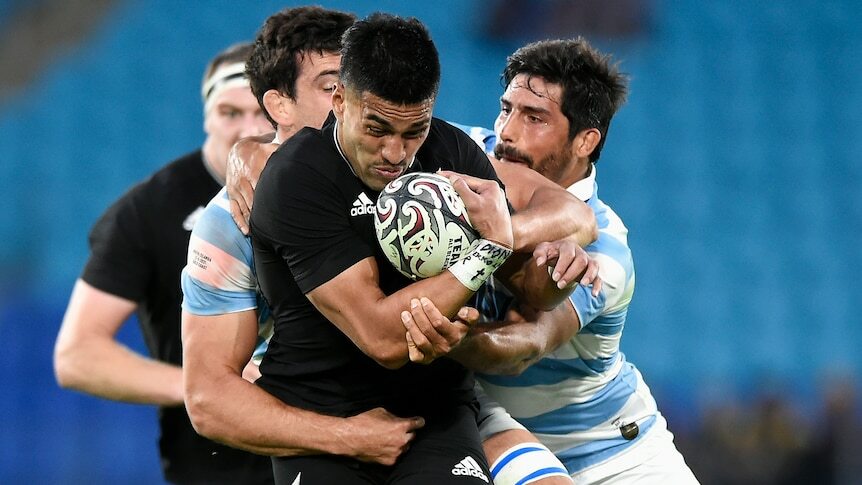 New Zealand has consolidated top spot in the Rugby Championship with a commanding 39-0 victory over Argentina in Robina.

Caught off guard in a shock first-ever loss to the Pumas in the corresponding fixture last year, the All Blacks shut out the Argentines in a ruthless display this time around.

Despite making six changes to their starting side, the All Blacks piled on five unanswered tries to notch their third straight bonus-point win, having crushed the Wallabies in their first two matches of the tournament.

Rieko Ioane, Sevu Reece, Dalton Papalii and Luke Jacobson, who bagged a double, all crossed in the opening match of Sunday's double-header.

Brothers Beauden and Jordie Barrett added four conversions and two penalty goals between them to round out the drubbing.

The All Blacks camped themselves inside Pumas' territory for much of the first half, but only had one try to show for their dominance of possession and territory until producing a 15-point blitz late in the section.

Argentina defended valiantly before the floodgates opened with Reece's five-pointer in the 37th minute, followed by Papalii's driving-maul try four minutes after the half-time siren when the Pumas were down a man.

Pablo Matera was yellow-carded for a breakdown infringement and the All Blacks punished the Pumas in the flanker's absence.

With rugged centre David Havili and Ioane running amok, the All Blacks snuffed out any hopes of an Argentine second-half fightback with their fourth try seven minutes after the interval.

Number eight Jacobson was the beneficiary of Beauden Barrett's scything run and brilliant flick pass as New Zealand's lead blew out to 29-0.

Argentina was reduced to 14 men for a second time when veteran prop Carlos Muzzio was sin-binned after referee Nic Berry lost patience following a succession of penalties against the Pumas.

The All Blacks again made the Pumas pay, with Jacobson doing it all himself for his second try that completed the scoring.

With two big losses to South Africa as well, Argentina remains empty-handed ahead of its return bout with New Zealand on Saturday in Brisbane.