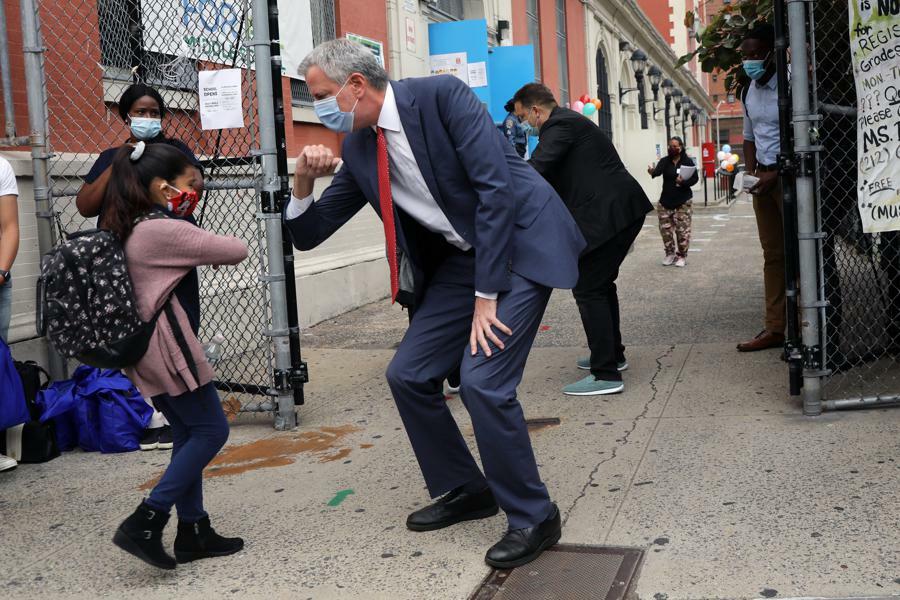 Bowing to longstanding pressure, New York City’s outgoing mayor has announced that the city will eliminate its gifted-and-talented classes. But without fundamental changes to curriculum and instruction, that move is unlikely to achieve its goal of making the system more equitable.

For years, Mayor Bill de Blasio has faced calls to dismantle the city’s extensive programs for students who score high on tests intended to measure academic aptitude, beginning at the tender age of four. Critics have charged that the programs, which enroll disproportionate numbers of white and Asian students, are racially discriminatory. The criticism is part of a broader push to dismantle selective admissions tests in other parts of the country as well, extending beyond the K-12 system to higher education.

Now, with only months left in his tenure, de Blasio has taken what appears to be bold action: a plan to replace gifted classes with what the New York Times describes as “a program that offers accelerated learning to all students in the later years of elementary school.”

Details are scarce, but the new model, dubbed “Brilliant NYC,” would also provide training for all of the system’s roughly 4,000 kindergarten teachers to deliver accelerated instruction—either to all 65,000 kindergarteners, according to one account, or just to those who “need accelerated learning within their general education classrooms.”

No word on what “accelerated instruction” would consist of, or what happens in first and second grades. But according to the Times, at third grade some children would be identified as needing “higher-level instruction in specific subject areas,” on the basis of past work and teacher input. Rather than being sent to separate gifted classes or schools, though, they would stay in regular classrooms and perhaps “spend a period or two of the day in small groups focusing on one subject area with specialized teachers.” That doesn’t sound all that different from standard elementary school practice, which divides children into reading and math groups according to their perceived ability.

Despite the predictable outcry from disgruntled New York parents—generally, those who have kids in gifted programs or are likely to—the mayor’s announcement may be little more than a publicity stunt, intended to bolster his chances in a rumored run for the governorship. Both of de Blasio’s potential successors as mayor oppose eliminating gifted-and-talented programs, and the front-runner, Eric Adams, wants to expand them in low-income neighborhoods. But even if the Brilliant NYC plan were to become a reality, it would probably have little impact other than to spur an exodus of relatively affluent parents from the school system.

At least one aspect of the plan makes sense: kids shouldn’t be tracked on the basis of a standardized test taken at age four, unless they’re off-the-charts prodigies—and perhaps not even then. And a large-scale study has found that gifted-and-talented programs generally have little effect on achievement, although the programs vary so much it’s hard to say whether that’s a reliable finding. It’s possible that kids who show an aptitude in math, for example, would benefit from zipping ahead, but most gifted-and-talented programs focus on reading.

And “reading” is the crux of the problem. The way schools in New York City and most other places in the United States approach reading instruction ends up stifling the potential of untold numbers of children. One reason is that educators have long underestimated how many kids need systematic instruction in phonics in order to fluently decipher words. The other, equally important reason is a misguided approach to teaching reading comprehension that prioritizes instruction in “skills and strategies”—like “finding the main idea”—over building the academic knowledge that is crucial to enabling students to understand what they read.

Some kids are able to acquire that kind of knowledge at home, usually because they have more highly educated parents, while others rely on school for that—and, in our current system, those kids are often the least likely to get it there. Schools with low test scores are the most apt to focus on comprehension skills at the expense of building knowledge, in a futile effort to boost scores.

Both of these systemic failings, which stem primarily from defects in teacher training, end up disproportionately affecting students at the lower end of the socioeconomic spectrum. (In New York City and some other places, one apparent exception is Asian students, who often excel academically even if their families are low-income. The usual explanation is “culture,” but another factor may be afterschool programs that build kids’ academic knowledge and vocabulary over many years.) So unless the “acceleration” provided by Brilliant NYC focuses on building academic knowledge for all students, ideally through a content-rich curriculum that starts in kindergarten, tinkering with a term like “gifted” will be no more effective in the city than it has been elsewhere.

The best thing New York could do to make its school system fairer would be to adopt one of the knowledge-building elementary literacy curricula that are now available, and provide teachers with high-quality training in how to implement it. But that seems highly unlikely. The city has long been a bastion of a widespread pedagogical approach termed “balanced literacy,” which has a history of being averse to systematic phonics and to the idea that the way to boost reading comprehension is to build academic knowledge. And the city recently launched a $200-million effort to create its own “Universal Mosaic” curriculum, which is part of a larger post-pandemic “academic recovery plan.”

One part of that larger plan could bring more fairness to the system: universal screening for dyslexia in the early grades and an increase in the number of reading coaches to provide support to teachers. If the screening is focused on things like kids’ ability to sound out discrete words, including nonsense words that conform to phonics patterns that have been taught, it could catch “decoding” problems and help put students on the path to success. Similar screening tests have been adopted in England and parts of Australia and appear to be working well. But if the tests lump together decoding and comprehension, as many current tests do, they could obscure what the real issue is. And a lot will depend on the expertise of the coaches and their ability to overcome entrenched beliefs among educators.

But the curriculum itself, which has yet to be unveiled, doesn’t sound particularly promising. For one thing, it covers only reading and math—not social studies, science, or the arts, which are the subjects that have the most potential to build the kind of academic knowledge and vocabulary that fuel reading comprehension.

And, to the extent that any details about the curriculum have emerged, it seems it will focus on ensuring that materials reflect students’ cultural diversity. That’s important, but if students continue to be tracked into leveled reading groups depending on their supposed ability—and instructed to practice “comparing and contrasting,” or whatever the skill of the week is, on texts at their “level” rather than being given access to complex concepts and vocabulary—all the diversity in the world won’t move the needle.

There’s a lot of potential brilliance among the underserved students of New York City, and in many other places, that is currently being nipped in the bud. But eliminating gifted and talented classes falls far short of what is needed to allow it to blossom.