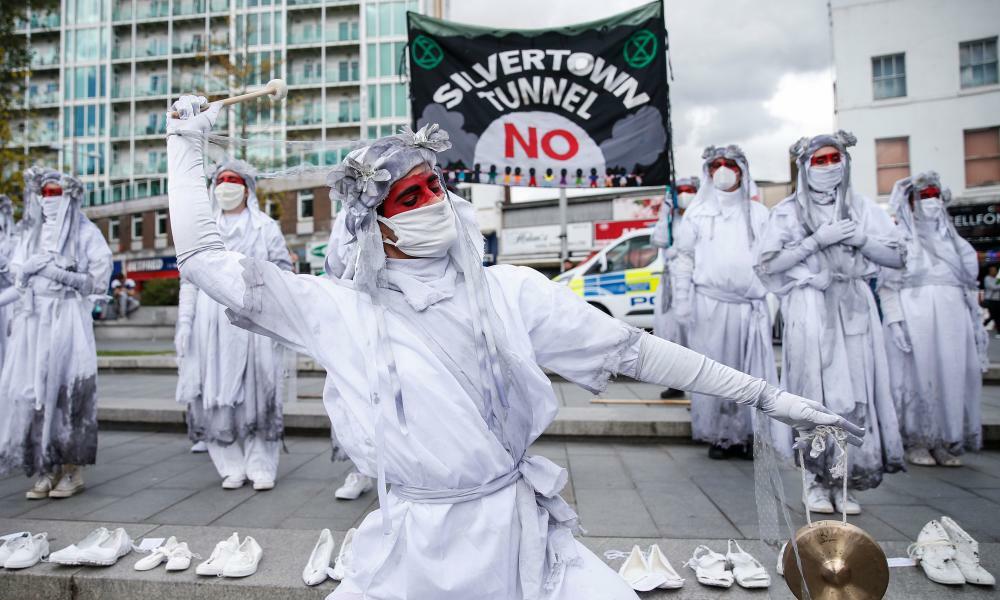 Burrowing deep under the Thames, Silvertown tunnel is scheduled as the first new road link across the capital’s river for 30 years. But, the four-lane highway, due to be completed in 2025, is about to become the focus of environmental protests in the lead-up to the Cop26 global climate summit in Glasgow in November.

Preliminary construction work has begun and tunnelling is due to begin next spring, but campaigners insist it is not too late to halt the £1bn-plus engineering project and are planning protests at both ends of the tunnel later this month.

A major target of the protest is Sadiq Khan, the Labour mayor of London, who is one the tunnel’s chief advocates while also championing decisive action to “avert a catastrophic climate crisis”. Khan claims the tunnel will ease congestion and reduce pollution.

But a letter sent on Friday from the Stop the Silvertown Tunnel Campaign urged the mayor to commission new studies on the impact of the scheme. “Spending billions on new road capacity for cars is not a policy that is consistent with acting on the climate emergency, or improving London’s air,” it said.

The tunnel’s opponents include traffic and public health experts, local residents, political parties, trade unions, campaign groups, teachers, doctors, several London boroughs and mayors. In April dozens of academics said it would be “foolhardy to press ahead with an infrastructure project that can only contribute to the UK’s excessive greenhouse gas emissions”. In July, the London Labour regional conference voted three to one in favour of scrapping it. Extinction Rebellion supporters are planning to join this month’s protests.

The twin bore tunnel will link Silvertown in Newham on the north bank of the Thames to the Greenwich peninsula on the south bank. Its path lies close to the Blackwall tunnel, which is frequently backed up in both directions with traffic attempting to cross the river.

Transport for London (TfL) awarded the contract to design, build and maintain the tunnel to a private consortium, RiverLinx. TfL, which will charge a toll for using both the Blackwall and the Silvertown tunnels, will repay RiverLinx the costs of construction over a 25-year period.

In a leaflet delivered to residents of Greenwich and Newham, TfL said: “For too long the Blackwall tunnel has been plagued by chronic congestion and daily incidents, and the cross-river road network in east London just cannot cope… Our plans will effectively eliminate congestion… This will mean quicker and more reliable journeys and reduced emissions, leading to better air quality.” The leaflet claimed there will be no increase in traffic.

But Simon Pirani, senior research fellow at the Oxford Institute of Energy Studies, told the Observer: “The claim that the tunnel is not going to make the problem of pollution worse is just not sustainable. It will definitely increase the amount of traffic.”

In a report last year, Stop Digging, Pirani cited research into an “induced traffic” effect, meaning more roads result in more vehicles. “We can’t have more traffic in big cities in rich countries. And if you’re reducing the number of cars, you do not need another tunnel. This tunnel is incompatible with taking the climate emergency seriously,” Pirani said.

Siân Berry, the co-leader of the Green party who unsuccessfully stood in the London mayoral elections this year, said she was “baffled” that Khan hadn’t cancelled the tunnel proposal. “There’s an enormous amount of community opposition to this. The fact that the tunnel will deliver more traffic and more pollution into streets which already have some of the highest pollution in London has really focused people’s minds,” she said. In June, hundreds of people protested against the tunnel in Newham, which has extremely poor air quality.

In a message of support to the protest, Rosamund Kissi-Debrah, whose nine-year-old daughter Ella died in 2013 due to air pollution poisoning in south London, said: “The Silvertown Tunnel means even more people will be impacted by air pollution…. Ella’s death tells us we must never create more toxic air, but less. Building roads always means more traffic, and not less. Please continue to fight for the sake of your children’s health.”

A spokesperson for Khan said: “The mayor is taking some of the boldest action of any city in the world to tackle air pollution in London…. Anyone who has been caught in traffic due to a problem in the Victorian-era Blackwall tunnel will know that there is an urgent need for another river crossing in this part of London.”

The introduction of tolls on both tunnels at Silvertown and Blackwall “will mean no overall increase in traffic and an improvement in air quality”.